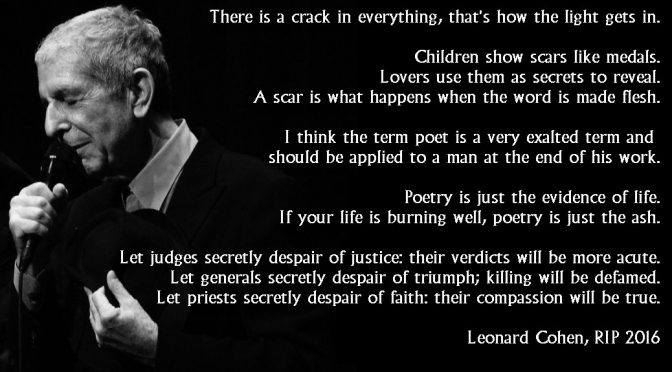 Over the last year, Brexit, Trump and the Right have been winners, the liberal Left losers this year. Leonard Cohen’s “Democracy is coming to the USA” is darkly ironic. Apart from Cohen, the arts world has also lost Alexis Arquette, David Bowie, Prince, Lou Reed, Alan Rickman, Gene Wilder and many more including too many comedians, just yesterday, Napoleon Solo – Robert Vaughn. Cohen died aged 82, the day before the American Presidential Election. At least, he now joins 1960s partner Marianne, to whom he wrote shortly before her death a few months back:

“Well Marianne, it’s come to this time when we are really so old and our bodies are falling apart and I think I will follow you very soon. Know that I am so close behind you that if you stretch out your hand, I think you can reach mine…. Goodbye old friend. Endless love, see you down the road.”

Cohen met Marianne Jensen on the Greek island of Hydra in 1960, whilst seeking some healthy sun, as recommended by his dentist! A woman of wisdom and beauty, she captivated him and had recently been left by her Norwegian novelist husband, and so began a love affair that lasted the 60s.

Cohen sang that before he fell for Marianne he “used to think [he] was some kind of Gypsy boy”. He was inspired by the Spanish poet Lorca, assassinated, aged just 38 during the Spanish Civil War.

At an awards ceremony in Spain, he said that in search of a voice, “It was only when I read, even in translation, the works of Lorca that I understood that there was a voice.”

“It is not that I copied his voice; I would not dare. But he gave me permission to find a voice, to locate a voice, that is to locate a self, a self that is not fixed, a self that struggles for its own existence. As I grew older, I understood that instructions came with this voice. What were these instructions? The instructions were never to lament casually. And if one is to express the great inevitable defeat that awaits us all, it must be done within the strict confines of dignity and beauty.” Leonard Cohen’s acceptance speech at award of Prince of Asturias literature prize, 2011 (Other awards)

Musically, Cohen also learned just five or six Flamenco chords from a Spanish guitar teacher who killed himself before his fourth lesson.

“Journalists, especially English journalists, were very cruel to me. They said I only knew three chords when I knew five!”

Nonetheless, they became the musical basis of his mournful music – that, and the gravitas of his gravelly “golden voice”.

It was, however, the combination of his sounds with the poetry of his own soul searching that leant it real depth, despair, darkness and désolé.

Your letters they all say that you’re beside me now.
Then why do I feel alone?
I’m standing on a ledge and your fine spider web
is fastening my ankle to a stone.
Now so long, Marianne, it’s time that we began …
For now I need your hidden love.
I’m cold as a new razor blade. (So Long, Marianne)

Cohen once joked that his record company should package razor blades with his records. His sometimes subversive humour amidst the angst and anxiety, strangely softened the pervasively painful lyrics.

“Any startling piece of work has a subversive element in it, a delicious element often.”

He sought in his own way “to be free” (‘Like a bird on the wire‘) and his writing in all forms drew you in if you were among the “inner-directed adolescents, lovers in all degrees of anguish, disappointed Platonists, pornography-peepers, hair-handed monks and Popists.”, as he wrote to his publisher.

More positively, he said and sung:

“There is a crack in everything, that’s how the light gets in.”

Recent Nobel Literature Laureate, Bob Dylan, would probably acknowledge that he could have shared the prize with Cohen. The pair were discovered by the same music scout in the early 1960s, and whilst many – including himself, regarded Dylan as the number one, (Dylan joked he was number zero to Cohen’s one) Cohen was a strong contender for the number two spot as greatest songwriter for a generation.

“Second only to Bob Dylan (and perhaps Paul Simon), he commands the attention of critics and younger musicians more firmly than any other musical figure from the 1960s who is [was] still working at the outset of the 21st century.” – Bruce Eder

Annoyingly, for Cohen at least, he worked hard at what came more easily to Dylan. What took Cohen five years to write Dylan could knock out in hours or less. Most famously, ‘Hallelujah’ took 5 years to write, probably down to the near-infinite number of verses, and almost a generation to rise to its modern reputation and dubious honour of being on the Shrek soundtrack.

Cohen came from a Canadian-Lithuanian-Polish line of successful and literate Jews, Talmudic scholars, businessmen, and synagogue founders. He practised his Judaism, but that didn’t interfere with his spiritual exploration of other beliefs from Scientology to Buddhism in the 1970s, leading to his ordination as a Zen Buddhist monk in the 90s. Of Jesus of Nazareth he said:

“I’m very fond of Jesus Christ. He may be the most beautiful guy who walked the face of this earth. Any guy who says ‘Blessed are the poor. Blessed are the meek’ has got to be a figure of unparalleled generosity and insight and madness…A man who declared himself to stand among the thieves, the prostitutes and the homeless. His position cannot be comprehended. It is an inhuman generosity. A generosity that would overthrow the world if it was embraced because nothing would weather that compassion. I’m not trying to alter the Jewish view of Jesus Christ. But to me, in spite of what I know about the history of legal Christianity, the figure of the man has touched me.” Leonard Cohen: In His Own Words (1998)

Perhaps he was a depressed Spock-lookalike figure, at times, but he also pursued life in all its fullness. From drugs to drink to women and wisdom, he ploughed life’s lows in search of its highs. In the end, he was neither a pure Buddhist nor a “really good junkie” but somehow the former, even as a drug in some way itself, held off the latter.

As he turned 65, he finally felt at peace with himself and the world, to some degree at least. He described it as acceptance and learning to ignore rather than solve himself.

“Give me a Leonard Cohen afterworld
So I can sigh eternally.”

After his suicide, Cohen wished he’s been able to speak to Cobain:

“I’m sorry I couldn’t have spoken to the young man. I see a lot of people at the Zen Centre, who have gone through drugs and found a way out that is not just Sunday school. There are always alternatives, and I might have been able to lay something on him.”

He leaves behind, millions of devotees, missing the mournfulness and aged adolescent agonising of his search for meaning. Even now, his songs remain poignant, if somewhat ironic, like ‘Democracy‘, and it still feels like ‘You want it Darker’ (2016) lies ahead, but perhaps too, we’ll also find the peace, that he found and now rests in.

“I’ve seen the nations rise and fall,
I’ve heard their stories, heard them all.
But love’s the only engine of survival.”