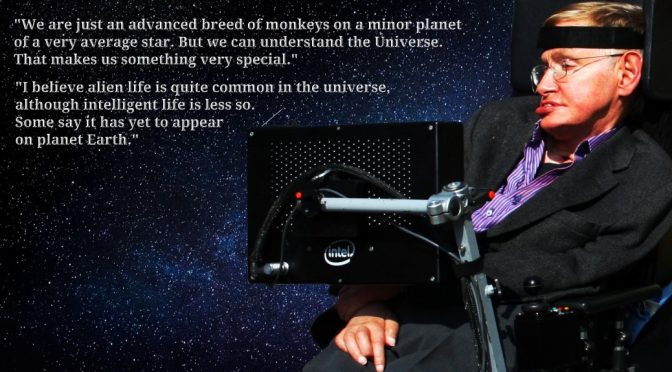 Stephen Hawking, a fellow alumnus of my adolescent alma mater, St Albans School, has just died, over 50-years after he was forecast to by doctors upon his diagnosis of Motor Neurone Disease. Stubborn and resilient to the last, he also added humour to help overcome his physical and mental health challenges.

“Life would be tragic if it weren’t funny.” – Stephen Hawking

“Keeping an active mind has been vital to my survival, as has been maintaining a sense of humour.”

Even in his older years he still regarded himself as a “child, who has never grown up”, maintaining his curiosity till the end. Best known for A Brief History of Time – on many people’s shelves but less often read, we were lucky to have had his challenging mind and courageous heart on this planet and in this universe for so long.

“We are just an advanced breed of monkeys on a minor planet of a very average star. But we can understand the Universe. That makes us something very special.”

Hawking was a profound thinker who found women more complex than the universe, questioned religious and scientific views alike, but for all his deep wisdom and intelligent theories, I like his saying that –

“It matters if you just don’t give up.”

At school, apart from traditional studies, he messed around manufacturing fireworks and building computers, the latter inspired and aided by his British-Armenian Maths teacher Dikran Tahta, of whom Hawking said:

Although intelligent, Hawking was initially not very hardworking nor academically successful and used risky tactics in both his studies and when coxing an Oxford University boat crew resulting in a few scrapes and crashes. Too busy “enjoying himself” rather than working, he spent an average of just an hour-a-day on his degree.

“I was never top of the class at school, but my classmates must have seen potential in me, because my nickname was ‘Einstein.'”

He described himself as essentially an introvert yet needing the stimulation of others. Speaking on Desert Island Discs, Stephen Hawking said:

“I need discussion with other people to stimulate me. I find it a great help in my work to describe my ideas to others. Even if they don’t offer any suggestions, the mere fact of having to organise my thoughts so that I can explain them to others often shows me a new way forward.”

He did not see progress as inevitably leading to utopian improvement, instead, he cautioned that greater inequality could result.

“Everyone can enjoy a life of luxurious leisure if the machine-produced wealth is shared, or most people can end up miserably poor if the machine-owners successfully lobby against wealth redistribution. So far, the trend seems to be toward the second option, with technology driving ever-increasing inequality.” – Hawking on Reddit

Given that the announcement of his death came on the same day as the reigniting of Cold War tit-for-tat expulsions between Britain and Russia, and sitting alongside the incendiary dialogue between North Korea and the US, one hopes that Hawking was wrong that:

“I believe alien life is quite common in the universe, although intelligent life is less so. Some say it has yet to appear on planet Earth.”

To most people, it is Stephen Hawking’s mind that inspires or his positive attitude in overcoming disability. To me, it was his attitude to life and his mental health that encourages me.

“Intelligence is the ability to adapt to change.”

His changing health being the biggest adaptation he had to choose to deal with. He recognised that you could not be angry with the world and be a part of educating it.

“People won’t have time for you if you are always angry or complaining.”

Focus on the good, on what you have, be a glass-half-full person:

“My advice to other disabled people would be, concentrate on things your disability doesn’t prevent you doing well, and don’t regret the things it interferes with. Don’t be disabled in spirit as well as physically.”

Not only intelligent but wise Stephen Hawking used humour to help overcome his physical and mental health challenges, his legacy is his spirit as much as his mind. He chose Je ne regrette rien, on Desert Island Discs, and that is as inspirational an attitude as all his writing.