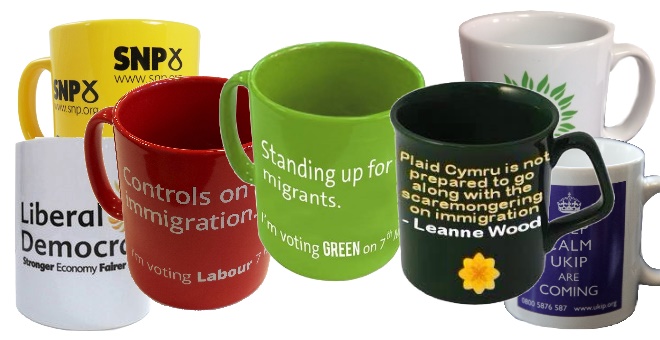 Today is the first full working day of the UK General Election 2015 campaign, the MPs are now just prospective Parliamentary candidates but some of Labour’s former MPs are keeping their distance from the immigration mugs in their online shop.

But for a moment, let’s celebrate – we have no MPs! Parliament has prorogued and dissolved. Anarchy in the UK! On a more serious note, the psephologists are number crunching, which we all know means the return of the swingometer and ever so accurate and meaningful poll predictions. Basically the Tories and Labour are neck to neck, but on day one it is Labour who are up to their necks in it.

Other issues from the weekend such as:

These were all dead and buried as old news after Labour created ‘better’ bad news!

It was barely an hour into day one of the official election campaigns and already immigration was the number one topic, or at least the mugs in Labour’s shop were.

#MugGate, as it will no doubt come to be called, is all about Labour‘s Five Pledges, most of which are fairly non-descript and non-specific, but #4 “Controls on Immigration” was what caught everyone’s attention.

Labour have done nothing but apologise for the two things the polls say they are weak on, namely, the economy and immigration – respectively, the Tories and UKIP’s campaign strengths. Or, if like me – an ardent pro-migration and diversity activist, their weaknesses.

There were 500 mugs available, now around 90 – so over 400 bought! Probably by Tories, journalists and people like me thinking these will be worth a fortune on eBay after Labour tries to recall them as a damage limitation exercise.

The criticisms that Labour were using not just Tory immigration rhetoric but UKIP’s were all over Twitter and the several Labour MPs including Sadiq Khan and Chuka Umunna said they wouldn’t buy one either. Another Labour MP, Diane Abbott, called them “shameful”. and an “embarrassment“, and the “real problem is that immigration controls are one of our 5 pledges at all”:

This shameful mug is an embarrassment. But real problem is that immigration controls are one of our 5 pledges at all pic.twitter.com/4xslD22Gcm

Paul Bernal in a blog post, somewhat inevitably called “Storm in a Tea Cup“, drew attention to what he thought could have been five better pledges by Labour. I doubt anyone is calling for completely open borders, but to make immigration controls a leading campaign pledge, is neither Old Labour nor New Labour but some kind of aping of the Right and the perception that immigration is one of the biggest public fears. It may well be, but if so why not take the high ground and make the positive economic and cultural case for immigration to the people. Don’t make it a race to the bottom and sink to the level of UKIP.

Renowned socialist and Guardian journalist, Owen Jones, called them “Farage wannabe mugs”, calling on Labour to give the people “hope”, rather than fuelling immigrant hate:

“Fancy a brew in my ‘Controls for immigration mug’?”. Seriously, Labour. Scrap your Farage wannabe mugs and give people some bloody hope

Last November, Ed Miliband announced plans to ban EU migrant benefits for 2 years, and a week later David Cameron responded by saying he would bar them for 4 years! Of course Nigel Farage would never let them in, in the first place by leaving the EU, although he would no doubt remain married to his German wife.

Another thing that surprised me was seeing how commercial the whole fundraising and marketing angle of the campaigns were. I did not know that each party except George Galloway’s Respect Party had an online shop and election merchandise.

The Green Party have rushed out a “Standing up for migrants” response to Labour mug within hours:

“Last week Labour released their “controlling immigration” mug. Here at The Green Party we believe in standing up for migrants’ rights. If you share the belief that we must all work together for the common good, join us in drinking from this mug! N.B. Exact design TBC. Coming soon”

The LibDem mug can’t actually be searched for on their website because all searches must contain at least 4 characters, which rules out “mug”! Although if you search for “mugs” you’ll be steered towards the only search result, a customised mug with your favourite LibDem MP, MEP or Lord on it! Browse by category and you’ll find the other 18 mugs on offer. Lesson – don’t let the LibDems build the next Government website!

There’s also an “I’m a counsellor” mug in the Welsh products section. I always thought that counsellors counseled whereas councillors stood for office, even in Wales.

The Tories have an illustration in their kitchen shop of mugs but no mugs for sale, hastily removed, perhaps, after Labour #MugGate? Though, for the price of Labour’s mug £5 you could buy “36 Blue cupcake cases“. By far the largest section of their online shop contains 23 Maggie memorabilia items. Many of the items elsewhere in the shop, including the baby clothing department, are actually green and not blue. Get in quick with your “Future Prime Minister” bib to replace David Cameron in the Parliament after next…

Future economic policies could perhaps be gleaned from the online shop Party political pricing. Labour and Green mugs are £5, SNP £6, the LibDems, “we won’t cut as much as Labour or Tory”, £7.50, and the Tory mugs were no doubt scrapped during the austerity cuts or vetoed by George Osborne. Plaid Cymru are positively encouraging migration to Wales as they are only charging £3!

The Political is Personal

David Cameron has said that the political is more than just personal, it is “national”, and made the campaign trail a straight choice between the Churchill-Cameron strong man or Ed “two kitchens” Miliband chaos.

So one of the very things that turns people off politics, is back to centre stage – personality politics. The soundbites are more about the Cameron v Miliband, than Conservative v Labour. Whilst Labour are fairly solid, repeated polls suggest that Miliband has the lowest approval rating of all the party leaders. Whether level-pegging or just ahead Labour would win more seats because of our demographic electoral system, however they are likely to fall short of a majority.

Whilst the USA has its Tea Party, here in the UK, in 6 weeks time, it will likely be a case of choosing which coalition set of mugs to form the next Government, and which get sold off on eBay at Poundland prices.