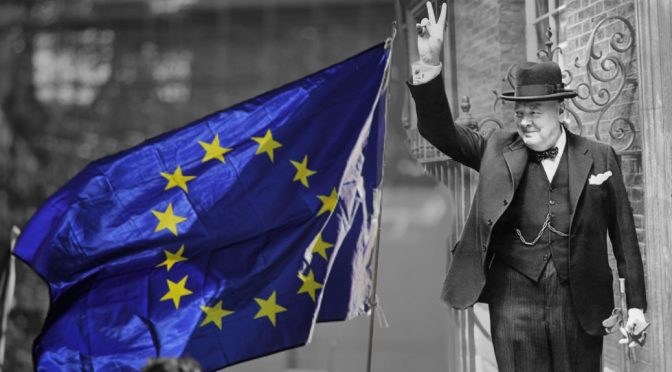 The war of words, or even war of the worldviews, continues apace over Britain’s relationship with Europe. The Battle of Brexit has already seen Dunkirkesque fishing fleets with Bob Geldof and Nigel Farage traversing the Thames and shouting at each other! Rather than resigning ourselves to the inevitable the Blitz spirit of Remainers has been to stubbornly resist Brexit whilst a small number of Leavers have threatened Guy Fawkesesque revolution if it doesn’t proceed as planned. ‘Planned’ is probably too strong a word for the most disorderly unplanned unmitigated disaster of an attempt to pull out of the EU that might see rebuilding UK supply and trade options more like a Scrapheap Challenge looking for parts here and there rather than being content in the existing roadworthy vehicle.

Meanwhile, armageddon-out-of-the-EU ‘No Deal’ survivalist plans include Government schemes to ration ferry space, charter planes, stockpile food and medicine. Water companies say they will struggle as purifying chemicals come from EU. Whilst the UK will miss its EU worker fruit-pickers, it will also miss its pick of fruit as 90% of our fruit is imported. No more 5-a-day then.

We had a man here once called Charles Trevalyan. He had lots of thoughts about the Irish and food. Perhaps someone should have a word with Priti Patel about how not to insult friends #brexit #conservatives #ireland https://t.co/7XKmuwIyiL

Additionally, the Government is preparing for mass immigration following a No Deal scenario. Yes, immigration! As the free movement of ex-pats, mostly of retirement age, seek to return to the UK if reciprocal EU residence rights are not agreed. Over a million people could return putting pressure on the NHS, taking our jobs, applying for benefits – oh wait wasn’t that the Leave argument? But these ‘foreigners’ all speak English and we can’t tell them to “Go Home” as the UK is their ‘home’ (as it is for all those who have settled here).

The false stereotypes of Britishness and ‘foreignness’ are aptly illustrated in the recent revelation by star spinner – not political but cricket, Moeen Ali that he had a white British grandmother called Betty Cox. Birmingham-born Ali could not be more British in terms of cricket, but the chess-playing all-rounder also acknowledges his Pakistani heritage – something that down-under he was taunted about when called ‘Osama’ by Australian sledgers.

As part of her charm offensive (either an oxymoron or a transposition of ‘offensive charm’) D-Day Theresa has dispatched 30 Tory MPs around the country to persuade people to adopt her T-for-Terrible Brexit Deal rather than N-for-Nobody wants it No Deal. The deal is heading for defeat and two words that should not be attached to Tory door-knocking, “charm offensive”, are only going to piss off the public – who can’t even vote on the Parliamentary debate.

Better a Dunkirk spirit of knowing when to retreat from a bad situation. May is too stubborn and fighting for her own survival which she sees as contingent upon showing strength and resolve, whereas true leadership also knows how to lead a hasty retreat from a mistake unlike the Charge of the Light Brigade disaster ahead of us.

Continuing the military metaphors and past leaders comparisons, Boris Johnson has called for a Churchillian resistance to Europe, likening it to standing up to Hitler! This is a poor choice of words, at the very least, for Churchill stood with Europe against Hitler. He called for a ‘United States of Europe‘. Some have argued that he would have believed in Europe but not been a part of it, others that he would have been a member and voted Remain. Either way, he was supportive of Europe.

“I knew Winston Churchill, I worked with him, I stayed with him at his home at Chartwell and I have read his speeches many times. I can assure you that Winston Churchill was no Euro-sceptic.” – Former Prime Minister, Edward Heath, 1996

Whilst we tread choppy waters on our quitting of the EU or even quitting the process of leaving so we remain, keeping up? UKIP are quitting their party – founded to quit the EU – in droves. The latest UKwitters include David Coburn and Paul Nuttall who join Nigel Farage, Suzanne Evans and others in quitting UKIP.

UKIP membership of around 23,000 is now half its 46,000 peak just prior to the EU Referendum. That such a small party – and an increasingly right-wing one at that, has influenced a generational change in our relationship with Europe is a testament to the ongoing divide between Eurosceptics and Europhile “citizens of Europe”.

It’s ironic that UKIP is collapsing after bringing about the Brexit vote by striking fear into the hearts of Tories and David Cameron that their voter base was quitting to join UKIP.  For its members to be now calling it too extremist with Tommy Robinson, riddled with Islamophobia and thuggery, makes one wonder why the Tories were so afraid of an extremist minority. Had David Cameron just waited it would have imploded anyway like the BNP or EDL and Brexit needn’t have happened.

If the British People were forced to vote on Leaving the EU again how would you vote? Retweet for a good sample size please.

Current polling “suggests that people continue to prefer remaining in the EU to the deal (Remain 46%(+3), Leave with the deal 37%(+3)) and that in a choice between the deal or leaving without one, they’d go for no deal (No deal 41%(+7), deal 35%(+3)). This leaves us in a bit of a quandary. People narrowly approve of the deal and think MPs should approve it… but they also prefer both of the two obvious alternatives to the deal. For the record, the poll also finds people in favour of a new referendum on the deal by 48% to 34%.”

“This week it is Parliament that will take back control. We have mixed oil and water by imposing on our Parliamentary system a referendum result. And, of course, Parliament must respect that. It is now for the House of Commons to decide how to proceed in the light of all that has happened…” – Andrew Mitchell MP

Even Brexiteers believe in the sovereignty of Parliament, or should do at least, it is democratically elected and sovereign, more so than the Queen or EU. So, what Parliament does next is critical. It is clear, though, that Parliament is overwhelmingly against a bad Deal that they cannot sell to their constituencies.

Tuesday’s “meaningful vote” is Parliamentary Democracy over Plebiscite Referendum – which was something of a meaningless vote, given the lies and gross simplicity without understanding context or consequences, and only offered for political expediency by Cameron to stave off votes leaching to UKIP who are now falling apart anyway.