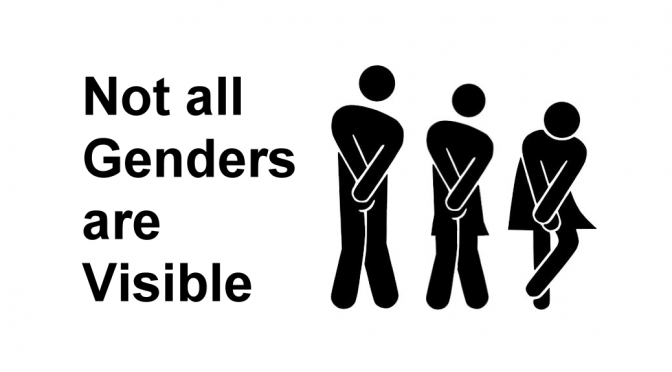 The court of social opinion or social media at least is no more relevant than an employment tribunal in determining someone’s gender. It is a reasonable place, though, to decide on the application of the Equality Act (2010) which protects both against sex discrimination and gender transition.  Respecting someone has little to do with the biology of sex and presentation of gender.

The Maya Forstater case in which she lost her job (non-renewed contract) was down to her “offensive and exclusionary” language in tweets questioning government proposals to allow people to self-identify as the opposite sex.

“My belief … is that sex is a biological fact, and is immutable. There are two sexes, male and female. Men and boys are male. Women and girls are female. It is impossible to change sex. These were until very recently understood as basic facts of life by almost everyone.” – Maya Forstater

Sex as “Biological…immutable” comes straight out of Trump’s US proposals to lock down sex as genitals by or at birth and only challenged by genetic evidence to the contrary.

Judge Tayler’s ruling kicked off responses from some expected and unexpected sources.

Dress however you please.
Call yourself whatever you like.
Sleep with any consenting adult who’ll have you.
Live your best life in peace and security.
But force women out of their jobs for stating that sex is real? #IStandWithMaya #ThisIsNotADrill

Sex is indeed real and at first sight mostly binary. Gender is also a reality and mostly a bitch. By that I mean, it binds us, boxes us, oppresses us whether by social constructs and constraints or psychological identity.

Facts, on the other hand, will always get in the way of ideology. Just as science fiction is free from the constraints of science fact, so, too, sex and gender constructs can be made in our own or society’s image, and no two humans let alone scientists, trans activists, or gender critical feminists, will entirely agree without subtle nuanced differences.

Reproductive sex (based upon binary gametes) is not the same as lived gender nor even outward sex. I have plenty of non-trans friends – some even happy being called cisgender (BTW saying you are not CIS means you are TRANS, lol!) whose outward sex may not reflect their reproductive gametes. One can be born with external female genitalia ie vaginal labia and internal male gametes ie testes. Incredibly rarely, one can also have external male genitalia and gametes and have an internal womb. These exceptions, it is claimed are disorders and dysfunctions that do not undermine sexual dimorphism – at a reproductive level (outside of laboratory help) this is true – it still takes two to tango, an egg and a sperm (after fighting off rivals and swimming faster whilst being healthy and fertile).

Sex, though, can be observed and assigned objectively from a series of outer characteristics though not necessarily accurately (mine took an hour or so to be sure at birth, small furry animals are equally risky to identify soon after birth!). Those outer characteristics may not match the inner when you come to try and have a family, then you may discover you are not just one of two gamete options (which could rarely be undifferentiated eg Mixed Gonadal Dysgenesis), but 22 chromosome possibilities from XX & XY (or even both in the same body) to XO, XXY to XXXXY, or that your body was insensitive or hypersensitive to or had delayed or early responses to sex hormones.

hi, I’m an evolutionary biologist & an #intersex person! sex is not binary in a TON of species, inc. vertebrates, mammals, & us. some ppl like me don’t make eggs or sperm. & intersex =/= disorder, just another biological way of being. sex variation in humans is substantial! https://t.co/q7rTUSbgY3

So whilst we are fixated with just two boxes there are many ways we can be sexed. Even many biologists, though not all, see sex as a spectrum.

“Biologists may have been building a more nuanced view of sex, but society has yet to catch up.” – Claire Ainsworth 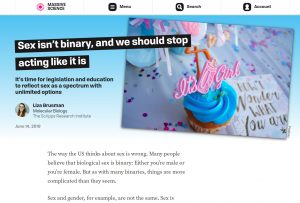 Why Sex Is Not Binary, Anne Fausto-Sterling, Biology and Gender, NYT

Sterling, indeed, recognises layers upon layers of sex, saying that:

“It has long been known that there is no single biological measure that unassailably places each and every human into one of two categories — male or female.”

She lists many of the following as a series of often non-binary sex markers:

Add to nature’s diversity, society and nurture, our gendered response to our sexed state and environment and very soon the apparent dimorphic binary breaks down. We may be born one of two sexes with some 1-in-100 having physical intersex variations but very soon in life we are one of several genders. I’m often asked how many sexes or genders there are? I usually reply: “At least two sexes and around seven billion genders”, since we all interpret our gender in a sexed world differently.

Professor Robin Lovell-Badge, head of the laboratory of stem cell biology and developmental genetics at the Francis Crick Institute, who discovered the gene that determines sex in mammals, said: “In the UK, I think most [people] would use ‘sex’ to refer to anatomical appearance and ‘gender’ to ways of behaviour.” To a scientist, he said, anatomy could appear male, female or somewhere in between, but a man who transitioned could be said to change sex. – The Times

Sex and gender should not be policed in a purely binary way. Not all sexes and genders are visible or divisible down toilet door lines and there’s scant evidence of abuse, the opposite if anything.

What’s in a pronoun? Mere politeness and respect that need not change your understanding of science (which may be different from the next person’s). Everyone has the right to privacy, safety, and respect and that means coming up with binary, unisex and non-binary spaces where appropriate that meet everyone’s needs and put nobody at risk. Risk assessments should be done on people that perpetrate not how people pee. A high vis jacket and a mop will get you into the ladies loo without any need to put on a dress.

The whole conversation around sex and gender identity has become more toxic than the blackwater bilge in septic sewage waste. Let’s discuss the science of sex and gender – their construction, oppression and expression – but separate from how we treat human beings with respect and dignity.

Equalities law is clear, even if we’re going to be discussing sex and gender until the end of time!