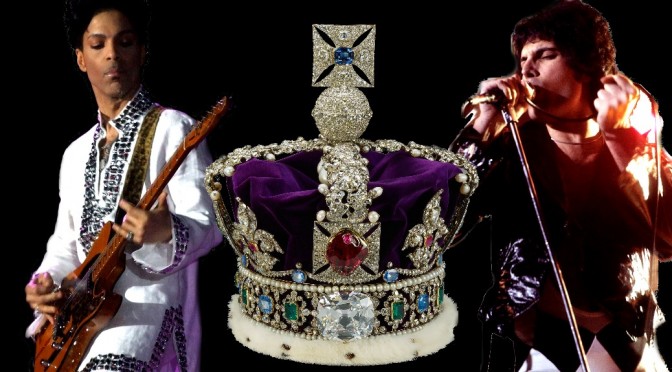 The Queen’s Birthday & the other Queen: Freddie Mercury

Royalty is trending, no not the 90-year-old Queen, nor the pop star Prince, who died today aged 57, but the great entertainer Freddie Mercury, who died at half the Queen’s age, 25 years ago. He spoke only days before his death of his contracting of HIV/AIDS back in 1991. The reason Freddie is also trending on the Queen’s birthday is that a scientific study into his renowned three-to-four-octave vocal range, far from merely a “little high, little low”, was published this week. The “acoustic analysis of speaking fundamental frequency, vibrato, and subharmonics” appeared in the ‘popular’ journal, Logopedics Phoniatrics Vocology.

In a 2005 poll organised by Blender and MTV2 Freddie was voted best male singer of all time, and in 2009 was selected as the best rock singer of all time by Classic Rock. AllMusic described him as having “one of the greatest voices in all of music.”

“Mercury’s voice was a force of nature with the velocity of a hurricane.” – Guardian

The range of Freddie’s voice, whether the study demonstrated 37 semitones – approximately 3 octaves, or other sources that suggested nearly 4 octaves, was immense either way. His vocal tremors and “vibratory pattern of vocal folds and ventricular folds” were similar to Mongolian “throat singing”.

One song that exhibited Freddie’s talents was Bohemian Rhapsody (1975), written by him with even the guitar parts being first planned and played on the piano by him. It was also responsible for one of the first music videos, created to avoid actually appearing on Top of the Pops.

“the piano Freddie recorded with was the same one Paul McCartney played when the Beatles recorded “Hey Jude.”“

“Too late, my time has come
Sends shivers down my spine
Body’s aching all the time
Goodbye everybody – I’ve got to go
Gotta leave you all behind and face the truth
Mama, ooo – (anyway the wind blows)
I don’t want to die
I sometimes wish I’d never been born at all”

So much lies hidden in the mock opera and rock anthem lyrics that entertained us but sometimes tortured Freddie. The last line above, “I sometimes wish I’d never been born at all” certainly tortured me, when I was at a low point.

Today is the 4th anniversary of one such low point in my life and music brings back so many memories. Friends once told me you shouldn’t have a suicide playlist on your iPod. Life can be cruel and people taken or take themselves from us, earlier than we’d wish, without saying goodbye or finishing what might have seemed to be their life’s work.I have no answers, only songs.

I was lucky enough to be at Queen’s last ever full line-up concert, at Knebworth, in 1986, along with 120,000 other fans. Status Quo were merely a support act.

God Save The Queen

Whilst the Queen continues to reign, Freddie’s reign ended 25 years ago, and Prince’s ended today. Their music left many indelible rock anthems on our playlists. Indeed, in 1974/5 they covered a version of THE National Anthem, “God Save The Queen” and sang it as an outro at most concert finales. Brian May did a solo live version from the roof top of Buckingham Palace for the Queen’s Golden Jubilee in 2002.

Who want to live forever?

We keep losing Rock legends like Lemmy and David Bowie, but their voices and magic will last forever. Music and celebrity mean more to current generations that tradition or royalty. Many will mourn the passing of Prince, as if he were a monarch, and many more still miss his highness Freddie Mercury.

Prince, who died today, is also no more to Purple reign over us. “Purple Rain” only ever made it no 2, on the US charts, for just two weeks, pipped by Wham!’s “Wake Me Up Before You Go-Go”.