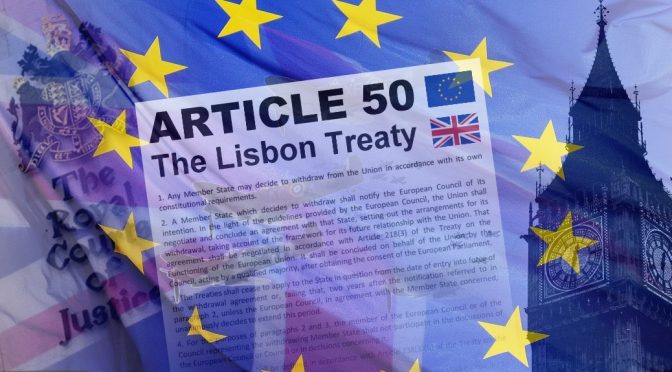 Article 50 & the Battle of Brexit Britain

So the Battle of Brexit is back on as Theresa May v Parliament, the alleged powers of the crown and office of PM v ministers, Leave vs Remain, UK v EU, England v Scotland, UKIP v itself, presses on. The High Court has ruled that the UK government must consult Parliament before triggering Article 50 to leave EU. In addition, the original drafter of Article 50 reminds us that the treaty clause says nothing about canceling the process if the political landscape changes, another referendum or general election changes things, or the likely ‘Hard Brexit’ deal is unappealing.

The Right Wing tabloids such as the Daily Mail went for character assassination of the High Court judges, including describing one with disdain as “openly gay”, or like The Sun attacking the petitioners as elite and/or foreign. The Daily Telegraph published a column by Nigel Farage on the front page.

Dominic Grieve, the Conservative former attorney general, said reading hostile coverage in the Mail and the Daily Telegraph “started to make one think that one was living in Robert Mugabe’s Zimbabwe … I think there’s a danger of a sort of mob psyche developing – and mature democracies should take sensible steps to avoid that”. – The Guardian

Hard Right Brexiters and the EDL have promised riots if Parliament votes against Article 50. The nature of things to come?

I say Theresa May immediately calls a vote on article 50, if MP’s vote against there will be riots

So, the battle to stay or go has been reignited.

The Government is going to appeal to the Supreme Court but this is embarrassing for Theresa May and will add delays to the process. The appeal, may, ironically, end up in the European Court of Justice! Something that would not appeal to Nigel Farage.

I now fear every attempt will be made to block or delay triggering Article 50. They have no idea level of public anger they will provoke.

Gina Miller who led the petitioners bringing the court case against the government has now received death and sexual assault threats from online trolls following the High Court victory.

Labour leadership contender, MP Owen Smith has now called for Labour to amend a parliamentary Article 50 Bill to include a second EU referendum on it.

The argument by the Government that it can use the Crown’s royal prerogative powers is itself a smack in the face for democracy and Parliament’s sovereignty – the very thing Brexiters claim was the main reason for leaving the European Union. Yes, the EU Referendum was democracy in action, albeit with huge lies, fearmongering and bribes, on both sides – but, then saying that the PM now has the final say, reverses that very democracy. The PM is unelected and is not sovereign over Parliament’s MPs – who were elected on a stronger more honest mandate than a yes/no poorly managed Referendum campaign only brought in to appease the Tory Right so that they did not join UKIP. So just who is the Crown and who are the People? UKIP seem to be laying claim to being the voice of the people – if that it the result of Brexit then everyone loses in the long run.

Article 50 may not be final

So, the leaving process can and could be halted, not just by court action, but also since Article 50 is not irreversible according to its drafter. John Kerr, a former UK chief diplomat, and Secretary General of the European Convention, has stated the obvious, that anyone reading Article 50 can discern for themselves, that:

“It is not irrevocable – you can change your mind while the process is going on.” – Lord Kerr

Indeed, Kerr suggested that the purpose of Article 50 was to slow down dictators from taking existing members out of the EU too quickly, nobody envisaged a country democratically withdrawing – although that right, should and does exist.

Former equivocating Leave campaign leader and now bumbling Foreign Secretary Boris Johnson said, this week at the Spectator Awards that Britain would make a “Titanic success of Brexit”. When the audience yelled out “it sank!”, one has to wonder whether he knew or was well aware of what he was saying.

Adding further poignancy to the event, Nigel Farage won the Spectator Lifetime Achievement Award. This recalls the Brexit Battle on the River Thames earlier this summer.

The Pound has leapt 1.5% against the Dollar and nearly 2% against the Euro in just a morning on the currency markets in response.

The near 20% fall in Sterling since the EU Referendum has made exports cheaper, but the cost of using Microsoft software for business has just risen 22%. Lenovo and Apple have raised their prices 10-20%. For the poor and vulnerable, food, drink, energy, and transport costs are all rising. The Government is guaranteeing that car manufacturers will not suffer during trade and tariff deals, meaning that they will find a way to compensate (itself against WTO rules) them or negotiate a trade deal on a sector-by-sector basis, something the non-car producing nations may block.

The FTSE-250 jumped 1.5%, it is made up of more British revenue-based businesses. The FTSE-100 lost 0.6% as it is more made up of multinationals with balance sheets in Dollars.

Where are the lines of democracy drawn?

Whilst a slim majority voted for Brexit, it was not a majority of either voters or the population. It was also regionally divisive. Northern Ireland and Scotland votes to stay, as did London and Norwich! More interestingly, Wales voted to leave, yet is concerned that England is driving the terms of Brexit against the wishes of regionally devolved parliaments like the Welsh and Scots.

Carwyn Jones, First Minister of Wales, has now called for votes on Brexit terms and negotiating positions to take place in Cardiff, Scotland and Northern Ireland, as well as Westminster. Democracy may have begun a process to take the UK out of the EU, but it may also have triggered a process to take Scotland and others out of the UK. With the Government playing hard ball against the regions, nay countries, of the UK, we are storing up future problems and questions over whose sovereignty is paramount.

Theresa May seems to be arguing that the courts should not stand in the way of the Government. So the Government is above the law? Suzanne Evans, of UKIP, agrees, and has called for the judges in today’s decision to be sacked!

Whilst many fearmongering scenarios may be unlikely, and initial economic data post-EU Referendum is not as bad as feared – yet, it does show that continued discussion and opposition may be fruitful, whether to change our negotiating position with the EU, or to wriggle our way out of Brexit itself. If that is a possibility, there needs to be a wider political discussion before a clearer and cleaner campaign and a second referendum on any final EU deal. Paddy Power have, today, halved the odds from 10/1 to 5/1 of a second EU referendum taking place before 2019.

So, as the Battle of Brexit reignites, with the threat of appeals and riots, this is neither over nor barely begun in divided Britain. After the last 6 months of the EU Referendum campaigns, increased hate crimes, rising stock markets and falling Pound, the likelihood of fresh devolution votes – Britain will not be healed or united by either leaving or remaining. Crown and Parliament have been set against each other, and democracy and debate seem to be the losers. Leave campaigners think the former is ignored if the Referendum vote it upheld. Remainers believe the vote was tarnished by lies and a politically-motivated campaign run for reasons other than the over-simplified seemingly consequence-free question being asked. At the very least, the debate should remain open to challenge Hard Brexit and Brexit means Brexit positions, and to see how the mind of the EU and the UK changes over the duration of Article 50, should it be triggered, and should it lead to Brexit, given that it is possible to cancel the process if the terms of #Brexit are too hard to bear.