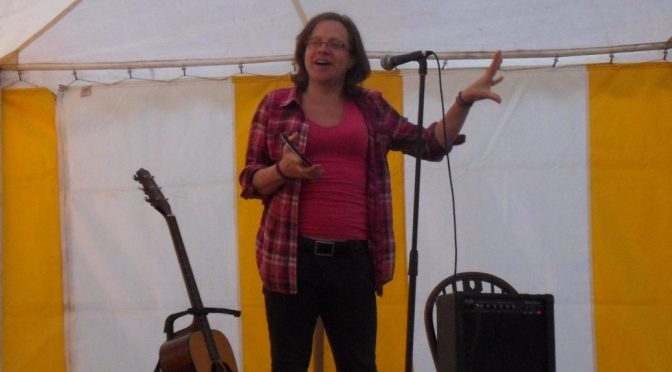 Doing stand-up comedy began in 2011 as another fear to conquer, I ended up loving it! Along with deep sea diving it was another case of “feel the fear and do it anyway”, to quote Susan Jeffers.

2007 was the year I came out as trans. My first gig was almost as terrifying, but in the end, almost as exhilarating. Fear and fun have been closely allied ever since.

I remember school when one had the choice of being a bully, being bullied, or being the class clown – I chose the latter. Many comedians have similar stories and many have mental health challenges.

Making fun of yourself – before someone else does, is a defence mechanism. It is also, comedy wisdom if you want to be ethical and attract empathy. Putting yourself down, in a tongue-in-cheek way, rather than attacking others is the comedy high road. The low road attracts hecklers and picks on the audience, minorities, and plays on negative stereotypes. That said, I often make the joke that as trans I am doubly lost, being unable to either read a map or ask for directions.

For all my cleverly written material, the best laughs always came from embarrassing real life stories and narrative humour. It both exposes oneself and draws people in.

I guess, the most extreme example of that was a major suicide attempt in 2012. Three months afterwards, I was mocking myself in a deadpan stand-up at a Pride fringe event. Someone came up to me afterwards and said how good it was, and how it was so believable, as if I’d actually done and felt all those things – I had! Truth really is stranger and often funnier than fiction.

One is always, in the end, upstaged by children and animals, and my most laughs came from relating the ear-greasing push-me-pull-you tale of a  British Bulldog that got stuck in my cat-flap.

One gig blurb ran: “Mental madness and lexical lewdness from Katy Went who clutters her way through life with a mind like a cross between the multi-laned M25 and a broken sieve that lacks the ability to distinguish between the good, bad and downright inappropriate.”

“Bailiffs & Vampires, bloodsuckers the both of them, same rule applies though – don’t ever invite them over your doorstep”