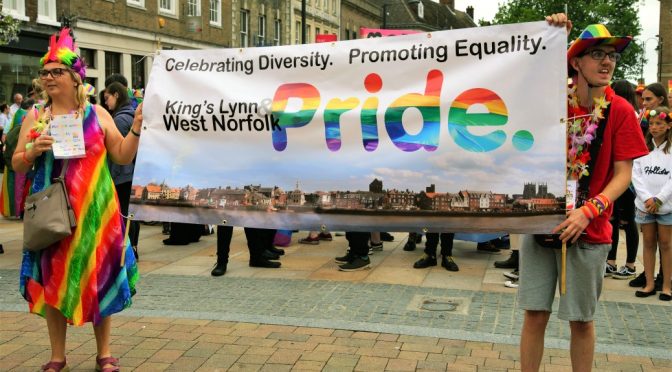 After ten years of Norwich Pride, King’s Lynn and West Norfolk saw their first LGBT+ Pride with 1200+ people parading (double the expected numbers) through the shopping streets and weaving their way to the Walks for stalls, music and talks. There was a great community atmosphere, a same-sex marriage proposal (she said yes!), a solid presence by Norwich-based venues, organisations including the Catherine Wheel, Mature Gay Community, Proud Canaries and more, and people from other Prides.

Ely Pride had taken place the previous week (historically, the cathedral flew the Rainbow flag), Colchester the same day. East Anglian Prides are growing and our communities are changing. We need more rural and regional Prides like this, away from the mega city Prides in order to reach counties and communities that may not experience the level of LGBT+ acceptance that other places may currently enjoy.

To paraphrase Audre Lorde, “We are not free until every LGBT is free” to live authentically, without stigma or prejudice, love whom we love, and be who we are without impediment or challenge.

Allies outnumbered protesters by hundreds and thousands to one. Christians marching with Pride, in clerical vestments or other identifiable ways also exceeded by at least 10:1 the solitary protester with a cross – who at least consented to a photobomb by a drag queen and head-to-toe rainbow me chanting “love is love” and giving him a hug.

The tide is turning, history keeps being made, and society is changing.

There were talks from Julie Bremner of Norwich Pride about why we still need Pride, another person spoke eloquently of our history of protest and activism to gain equal rights, and then after one of the organisers spoke, I was asked to say a few words – and “a few” is not in my vocabulary! It will always be a tad preachy and political, occasionally irreverent, but hopefully not irrelevant.

“Ten years of Norwich Pride from the original 500 expected to 2500 plus that turned up and quickly three to four times that is a sign of what can be achieved; mighty oaks from small acorns grow, as the saying goes – no wood jokes please 😉

Norwich Pride this year made me realise how much harder it would have been coming out for a decade without a local Pride to transform my city, my community, the bars, streets and shops to LGB and Trans positive places. To move from suspicion, persecution and opposition to tolerance, acceptance and welcome.

The growth of Norfolk LGBT visibility and services over the years has been primarily Norwich based. Our 10 trans and non-binary support groups, dozen LGB+ groups, half-dozen venues, are mostly Norwich-based, though they dwarf what is available in neighbouring counties let alone other parts of Norfolk. We had a North Norfolk Pride 9 years ago, Ipswich one year, Colchester for the first time last year and again today, Ely for the first time last week. Who would have thought ten years ago that Ely Cathedral would be flying the Rainbow flag.

Supporting rural and regional Prides and solidarity with distant persecuted ones such as Pride Uganda has always been a part of Norwich Pride’s hope and vision.

Supporting other places, other Prides, supporting each other is critical.

Unity does not mean we have to agree, but how we disagree and engage is seen by all, especially the cishet public and allies that have been a part of creating a city and a county that increasingly accepts and welcomes LGBT+ customers, residents, events etc

Division such as TERF v Trans, the online backlash against genderfluid queer lesbian Ruby Rose for not being lesbian enough to play Batwoman. The number of times I’ve been called the wrong kind of trans, not LGB enough, or witnessed pain or surgical point scoring in disabled, intersex and other communities. We shouldn’t be playing oppression bingo or privileging one discrimination over another.

Unity is our strength against the tyranny of the majority but healthy diversity, united in our difference not monochrome uniformity is what makes us even stronger.

I was torn between wearing my trans colours outfit, Dr Martens, and flag, as I did at Norwich or the rainbow one today. I think the Rainbow symbol is more important than ever.

I mean it’s been great to see a dozen identity flags at Norwich Pride and here today but the Rainbow flag will always remind me of our history and unity.

The rainbow is our symbol because of its diversity. Red and blue, orange and purple, green and yellow, the whole gay, queer and minority sexuality and gender identity spectrum together. The rainbow is not just 6 stripes nor its original 8 colours, it’s all of us together. A common humanity, mutual respect, and human rights for all.

So, today, is a day to celebrate our diversity, but not accentuate our disagreements, to join together to get better respect, rights and resources, to fight together but not each other. Tomorrow we can discuss those things, today we Pride!

I’ll end with a quote from former United Nations leader and Nobel Prize winner Kofi Annan who died this morning.”

“To live is to choose. But to choose well, you must know who you are and what you stand for, where you want to go and why you want to get there”