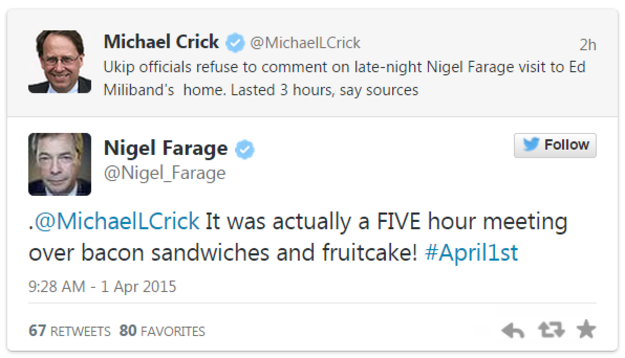 Some UKIP Policies are Jokes

April Fool’s Day falling on the third day of the UK General Election 2015 campaign is a godsend for political hacks, journalists and comedians. But with political parties, especially Ukip so prone to the unbelievable and public relations disasters anyway, how does one tell Ukip fiction from fact?

These are just some of 13 stories out there about Ukip from the last 24 hours or so, how many can you identify as jokes rather than less funny actual policies?

13 UKIP Policies, or are they April Fools?

(2) Streets too full of immigrants for British children to safely play football. Although it would make for ideal local World Cups!

(4) As part of a tourism initiative and two fingers up to France before the 200th anniversary of the Battle of Waterloo, this June, Ukip wants to clean up the Kent coastline, to keep the ‘white’ cliffs of Dover, white. Napoleon had plans to invade the UK.

(7) Teenagers should not be allowed to vote on a EU referendum since they have been brainwashed by “colouring-in books on the Common Agricultural Policy”.

(8) In any coalition deal with Ukip, Nigel Farage feels the best fit ministerial portfolio for himself would be to develop a Minister for Tourism.

(9) In a vague reference to the Bedroom tax, aka Spare room subsidy, a Ukip candidate has called for a “spare womb tax“. Allegedly, the PPC “went off on one about how we should tax all those women who are failing the UK by not having kids. Especially since all the foreigners coming over here have at least 20 children each.”

(10) Interview on UK Christian broadcaster, Premier Radio, on why Ukip is enjoying a rise in support from Christians ahead of the general election.

(11) Marxist mind benders – “Over the past 30 years they have changed the way we speak and the way we think… I want to see a revolution in this country – a common sense revolution where we begin to say “no thanks” to the Cultural Marxist politically correct mind benders.”

(13) Ukip would introduce an Australian-style points immigration system and use an X-Factor-like panel with four officials voting on admission to the UK. Each migrant requesting a visa to enter and work here would need approval from at least three of the four officials.

How many Ukip policy jokes did you spot this April Fool’s? Just 4 are outright jokes and 2 are mixed truth and fiction, a full 7 are actual policy statements – but which ones?