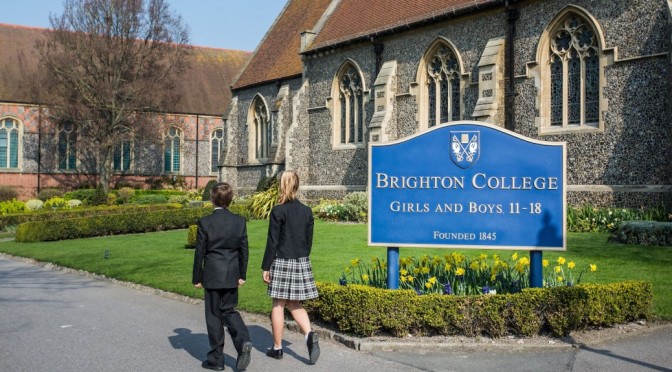 Brighton College is one of Britain’s top-ten schools, which puts student “welfare and happiness” as a number-one priority. Ranked as the leading co-educational school in England by The Sunday Times and described by The Week as “Britain’s most forward thinking school” it has lived up to this accolade by adopting a gender-neutral uniform policy. The educational establishment is:

“reacting to a changing society which recognises that some children have gender dysphoria and do not wish to lose their emotional gender identities at school.”

Increased education of trans and gender variant issues needs to follow, especially in younger years where up to half of all schools are still ignorant of issues. Calls for the PSHE curriculum to teach about transgender and non-binary awareness are regularly sounded and it may be that after the recent evidence-based trans enquiry the Government is finally listening.

A conservative estimate of transgender prevalence would suggest that around 10 pupils or more at the 900-student school might identify as trans and potentially even more as non-binary. The number ‘out’ within the school would depend upon the age of ‘coming out’ and the safety to do so at school. Up to 48% of trans teens attempt to take their own lives, and around 80% consider suicide. Around 80 primary school pupils a year are taking gender transition further and seeking the help of NHS services such as the Tavistock and Portman Gender Clinic.

“People say that schools should be tolerant places but I think that we are more than that. We encourage everyone and anyone to be who they are or who they want to be. I am really proud that I have been educated in a school where there is no concept of the norm, of conformity and of the expected way to be. Everyone has supported this move and I think that there is a real sense of unity, from the headmaster to the youngest 3rd former, about this idea. I also know that students who are gender fluid or for any reason, decide to change the uniform that they wear, will be accepted, supported and encouraged by the whole school.” – Headmaster Richard Cairns

Whilst its headmaster would love to see “the notion of boys’ and girl’ schools abolished altogether” having a uniform policy that covers the needs and requirements of any pupil including transgender and gender-fluid is a major step forward in equality and diversity.

Pupils can now opt for a skirt and jacket or trouser and blazer combo, which is not explicitly tied to gender. At least one pupil has taken the college up on the offer and other families have expressed interest in the school’s new policy.

“It ties in with my strong personal belief that youngsters should be respected for who they are. If some boys and girls are happier identifying with a different gender from that in which they were born, then my job is to make sure that we accommodate that. My only interest as headmaster is their welfare and happiness.” – Headmaster Richard Cairns

Whilst Head Master, Richard Cairns, was named “England’s Headmaster of the Year” by Tatler magazine in September 2012, he has recently come under fire for suggesting that single-sex education, particularly girls’ schools, puts them at a disadvantage and is “unrealistic”. He argues that co-educational environments benefit boys and girls providing a gentler, more tolerant, atmosphere. If tolerating a more flexible uniform policy increases the freedom of trans and genderqueer pupils to be themselves, then it is to everyone’s benefit. Indeed, for trans people being in a single-sex school is an additional layer of hell they have to endure, as social transition is nigh on impossible.