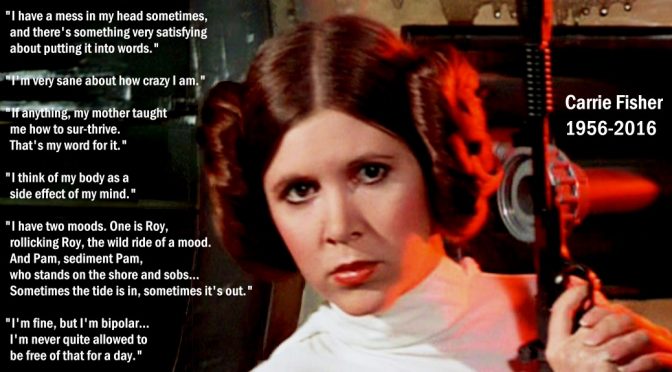 Carrie Fisher will be mostly remembered for being Princess Leia in Star Wars as the Space Western princess with a gun and rapid riposte to Harrison Ford’s Han Solo when he needed a put-down. It didn’t stop them having a recently revealed off-screen romance. Also, off-screen was her battle with the darker forces of addiction and bipolar mental health. Her website records her in the way she’d prefer to be remembered as an “actor, author” and shamelessly, a “mental health advocate”, her site listed mental health resources, and she was active in promoting mental health awareness.

For the record, she starred in 44 films from Shampoo (1975) to Star Wars: Episode VIII (2017), wrote 7 books, and well over half-a-dozen plays, scripts and screenplays. More a signature action than her Leia buns and Avengers/Charlie’s Angels-style gun-aloft pose, her middle finger was often shot up at the press. She was a hero for her honesty, humour and heart, the media needs to treat mental health better.

As someone who battles and “sur-thrives” with Bipolar Affective Disorder, aka manic depression, myself, I find so many echoes in her statements on mental health, and her activism in helping others through honesty and sheer guts – or clitzpah, female “courage bordering on arrogance”, as a friend puts it.

RIP Carrie Fisher 4 fighting the patriarchy, sexism, #bipolar #mentalhealth, addiction & Darth Vader, may the force be with her in death

A fitting tribute is, therefore, to remember her in her own words:

Carrie Fisher Quotes – In Her Own Words

“I really love the internet. They say chat-rooms are the trailer park of the internet but I find it amazing.”

On Writing as Therapy

“I have a mess in my head sometimes, and there’s something very satisfying about putting it into words. Certainly it’s not something that you’re in charge of, necessarily, but writing about it, putting it into your words, can be a very powerful experience.”

“Writing is a very calming thing for me.”

I can echo those thoughts, totally! Writing slows my racing pacing thoughts down, coming up with the language that accurately and emotional reflects my thoughts on myself, life, the universe and everything, is a process that is cathartic, creative, and better than CBT.

Whether scripted stand-up comedy or unscripted ad-lib, Carrie was quick witted, sharp, funny and could turn the tables on an interviewer. A vital skill in the harsh world of Hollywood and media criticism.

“I brought along Gary” (Carrie Fisher’s dog) “because his tongue matches my sweater” … “I think in my mouth so I don’t lie” … “what music makes [weight loss] worthwhile?” Not to mention some beautiful flirting with “DNA jackpot” GMA’s Amy Robach!

The humour, the jokey OCD matching, the flirting, she was my kind of inappropriate unboundaried, humourous getting-into-trouble, woman.

“I googled myself without lubricant. I don’t recommend it.” on David Letterman (2009)

“Sometimes I feel like I’ve got my nose pressed up against the window of a bakery, only I’m the bread” – Postcards from the Edge (1987)

On Life and Being Herself

“I am a spy in the house of me. I report back from the front lines of the battle that is me. I am somewhat nonplused by the event that is my life.”

Again, one feels like an actor in one’s own drama, there is sometimes a feeling of distance from the actions one takes, as if one were only playing a part, however grand a role.

On Body, Weight and Aging

“I don’t like looking at myself. I have such bad body dysmorphia.”

“I think of my body as a side effect of my mind.”

“I’m in a business where the only thing that matters is weight and appearance. That is so messed up. They might as well say ‘Get younger,’ because that’s how easy it is.”

“There were days I could barely struggle into a size 46 or 48, months of larges and XXLs, and endless rounds of leggings with the elastic at the waist stretched to its limit and beyond – topped with the fashion equivalent of a tea cozy. And always black, because I was in mourning for my slimmer self.”

“…when I do lose the weight, I don’t like that it makes me feel good about myself. It’s not who I am.”

“Along with aging comes life experience, so in every way that is consistent with even being human.”

“I now get awards all the time for being mentally ill. It’s better than being bad at being insane, right? How tragic would it be to be runner-up for Bipolar Woman of the Year?” – Wishful Drinking, (2008)

“Anything you can do in excess for the wrong reasons is exciting to me.”

“I have a chemical imbalance that, in its most extreme state, will lead me to a mental hospital.”

“Drugs made me feel more normal.”

“I went to a doctor and told him I felt normal on acid, that I was a light bulb in a world of moths. That is what the manic state is like.”

“I have two moods. One is Roy, rollicking Roy, the wild ride of a mood. And Pam, sediment Pam, who stands on the shore and sobs… Sometimes the tide is in, sometimes it’s out.”

The manic mood ride that is Roy and the pessimistic panic that is Pam, is very familiar. I’ve not heard anyone else echo my experience of drugs making one feel normal. I tried weed, ecstasy and minor drugs like that, even smoking and drinking, but they didn’t do anything for me, indeed ecstasy made me responsible, hyper-sensible!

On Surviving and Thriving

“If anything, my mother taught me how to sur-thrive. That’s my word for it.”

“The world of manic depression is a world of bad judgment calls.”

“I’ll never be known for my work with boundaries.”

“Mistakes are a drag, because you get in the area of regret and self-pity.”

Fortunately, it’s not all bad boundaries and manic mistakes, and the following day come-down into reality and realisation that one has overstepped, overdrawn, overdone it, and occasionally overdosed. Manic can be fun, or at least hypomanic can, with just enough awareness to feel empowered, energied, extrovert and not yet into the territory of relationship, finance and employment self-destruction.

She was the brightest, funniest, bravest, kindest, cleverest and sweetest person I ever knew. A crushing blow to lose @carrieffisher

On acting as if all is well

“One of the great things to pretend is that you’re not only alright, you’re in great shape. Now to have that come true – I’ve actually gone on stage depressed and that’s worked its magic on me, ’cause if I can convince you that I’m alright, then maybe I can convince me.”

“Stay afraid but do it anyway. What’s important is the action. You don’t have to wait to be confident. Just do it and eventually the confidence will follow.”

“I’m fine, but I’m bipolar. I’m on seven medications, and I take medication three times a day. This constantly puts me in touch with the illness I have. I’m never quite allowed to be free of that for a day.”

She is free now, “drowned in moonlight, strangled by my own bra“. Whilst she was “nonplused” about her life, we are far from nonplused at her death and feel the disruption in the force in 2016, which has been a traumatic year of loss. RIP Carrie, Princess, Queen, General and very human being, “May the Force be with you.”

Postscript: Carrie Fisher’s mother, Debbie Reynolds, star of Singin’ in the Rain, died aged 84 of a stroke within 24 hours of Carrie.