Without warning Facebook terror has struck, well Facebook error at least, and with thousands taking to Twitter to inform us of what we already knew, but at least it confirmed it was global and not a purge of ailurophile account holders – that’s cat lovers to you and me.

First reaction when I get the “Facebook Error” message… pic.twitter.com/KCQolEkNUs

The dystopic vision of life for over 1.25 billion people without Facebook is over, as after 30 minutes down Facebook was back. For 30 minutes this morning around 9am GMT in the UK, as everyone logged onto their computers at work – and checked their Facebook accounts first, the site crashed rendering just a 2013 error page saying “Sorry, something went wrong – We’re working on getting this fixed as soon as we can.” 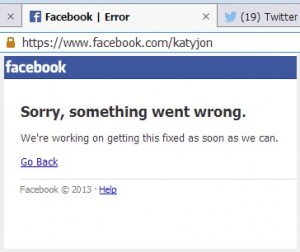 The irony of having to use rival Twitter to announce a Facebook error meltdown, which included the mobile platform too, was tracked in tens of thousands of tweets and trending hashtags #facebookdown as well as “facebook error”, and then after ‘THE EVENT’, via #WhenFacebookWasDown and #facebookup. A TEOTWAWKI moment if ever there wasn’t (“The end of the world as we know it”).

Dear fellow Indonesians, Facebook is down!! DEFCON 1, PEOPLE!! THIS IS NOT A DRILL!! (anyone still using facebook, btw?) — Hanif Widyanto (@followhan) June 19, 2014

There was no sign of an immediate crash in the share price after its near 2% rise the day before, just a drop of 1.9%  in trading later that day when the NYSE/NASDAQ opened. Longer term, advertisers and shareholders may reflect on the downtime of something that in barely over 10 years people have come to regard as universally available and as synonymous with life’s daily essentials as having a phone, electricity or the Internet.

For many, instead of the morning login to check cute cats, messages and memes, it was a case of having to read a paper, talk to your partner or work colleague, or go for a walk and enjoy nature, even do some work.

Funny how we forget the simple things and it takes the denial of service of some technology to realise we survived half our lives or more without it. Indeed, Facebook has only been around a decade, and thus February 2004, the birth of Facebook, was year zero, I was born 37 BF (Before Facebook), today is 10 AF (Anno Facebook).

All the Sci-Fi films of the past predicted androids, utopias, flying cars – none of which have fully happened, and none foresaw how endemic and pervasive a social media platform might become and how technology would be part and parcel of being social. Star Trek communicator “badges” never had the option for “Klingons on the starboard bow” – Share this on Facebook.

I remember, as a kid, a television show called “Why Don’t You Just Switch Off Your Television Set and Go Out and Do Something Less Boring Instead?” The 1973 TV show actually ran until 1995 with Russell T Davies of Doctor Who fame being at one point a producer and director of it. Again, the irony, as a television programme self-referenced turning itself off so that we would go and play outside during the school holidays rather than be glued to the gogglebox. The BBC itself said “If the programme had actually succeeded of course then it wouldn’t have had an audience.”

According to analytics by the Guardian, users didn’t just switch off and do something off social media, instead they simply switched channels from Facebook to Twitter. Some, “Apparently, … even went to Google+.”

News sites seemed relatively unaware at first, papers that publish throughout the day like London’s Metro were quick to publish after the site was restored but with little response from Facebook yet other than this:

“Earlier this morning, we experienced an issue that prevented people from posting to Facebook for a brief period of time. We resolved the issue quickly, and we are now back to 100%. We’re sorry for any inconvenience this may have caused… This doesn’t happen often, but when it does we make sure we learn from the experience so we can make Facebook that much more reliable.”

Back in 2010 when the site was down for 2.5 hours Facebook issued an apology or rather an unintelligible engineering explanation for it. The Independent reported that people were  complaining about having to spend time with their offspring or go on to Pinterest for inspirational quotes. They quote the movie about the founding of Facebook, ‘The Social Network’, where Mark Zuckerberg proudly said “Facebook would never go down.”

The dilemma is that for many business models Facebook has become one of the leading referrers for business traffic, alongside Google, Pinterest etc. So 30 minutes downtime is 30 minutes lost business, losing millions worldwide. “Publishers” in particular “saw referral traffic from Facebook fall off a cliff as the outage hit”, the Guardian reported.

The Metro was also quick to jump on the ever pervasive lists bandwagon with “Five ways we used the crash to our advantage“, it won’t be long before the blogs have “Ten things to do when you can’t get on Facebook”. The Nestlé KitKat Philippines ‏Twitter account @kitkat_ph was quick to take advantage “Looks like #Facebook is having a BREAK right now. Have a BREAK, too! :)”.

Looks like #Facebook is having a BREAK right now. Have a BREAK, too! 🙂 #facebookdown pic.twitter.com/rBhH4CMqKS — Nestle KitKat PH (@kitkat_ph) June 19, 2014