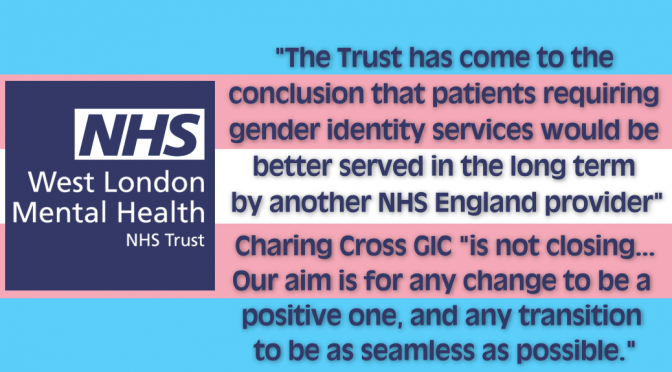 The West London Mental Health Trust (WLMHT) has issued a statement and then after mass trans patient panic (well a few of us!) has clarified it. The Gender Identity Clinic at Charing Cross Hospital (CX GIC) is not to close but to seek new NHS England oversight, preferably not under the auspices of mental health care. This is both unnerving for existing patients on the long waiting lists and potentially radical.

We are committed to running the Gender Identity Clinic until @NHSEngland find a new provider for the service. It will not close.

The Charing Cross Gender Identity Clinic is, in their own words, “the largest and oldest clinic of its kind dating back to 1966”. The same year that Harry Benjamin published “The Transsexual Phenomenon“.

UPDATE: It has been confirmed that from April 2017 the Tavistock and Portman NHS Foundation Trust will take over the management and funding of the Charing Cross GIC, without its location changing. The T&P NHS FT also run Tavistock GIDS, London (child and adolescent service).

All this comes the same day the NHS has announced further cuts in a spiralling financial crisis – the biggest in its history, requiring the euphemistically named “sustainability and transformation” plans, in other words, “cuts”.

“We are seeing more and more pressures on staff trying to run harder and harder. We are reaching breaking point.” – Chris Hopson, Chief Executive of NHS Providers

The Gender Identity Clinic at Charing Cross plays a leading role nationally and internationally in helping people experiencing gender dysphoria to feel more comfortable in their own bodies.

West London Mental Health Trust (WLMHT) is incredibly proud to have been at the forefront of developing gender identity services during a period in which societal attitudes and understanding of this issue has improved so vastly, and that the Charing Cross GIC and its staff have, since 1966, helped nearly 7500 people to lead happier, healthier lives.

Demand for gender identity services has risen sharply in recent years as society has grown more understanding and awareness of NHS services has developed. This has been challenging for the clinic and resulted in waiting times that are longer than we would like. However, the clinic’s staff have continued to invest huge amounts of energy and, working with NHS England, have made great strides in bringing these waiting times down while still providing a service which is rated highly by patients.

However, as WLMHT moves forward it is necessary to refocus the services that we provide. The Board has made a decision that the medium-term strategic focus for the Trust will be to develop mental health services, physical care and integration between the two.

As a result, the Trust has come to the conclusion that patients requiring gender identity services would be better served in the long term by another provider, and has therefore served notice on our contract to NHS England.

We know that many of the patients we see at the GIC are at difficult times in their lives and that this announcement may cause alarm; we would therefore like to offer the following reassurances:

“The gender identity clinic is not closing. To clarify, we clinicians have long felt that West London Mental Health Trust is not a good fit for the unique and specific service we provide (the vast majority of those we see are not mentally ill).

“Increasingly, we feel our patients would be better served by us if we worked somewhere better able to support and develop a more tailored approach to gender.

“There are a number of options in terms of alternative providers. We would not make any move unless confident that patient care would be markedly improved.

“Until that point, current arrangements will still apply. Our aim is for any change to be a positive one, and any transition to be as seamless as possible.”

Okay, so Charing Cross GIC is *not* closing. It’s about the gender clinic preferring to be hosted by a non mental health provider.

Waiting times for first appointments at the Charing Cross GIC are currently around 12 months from the initial referral but can often take 3-7 years in total, when you include surgery which only takes place after two psychiatric approvals and a pre-surgical assessment.

Referral times are not only a postcode lottery but constantly change – both up and down, according to staffing, and ever-increasing transgender service user demand. Norwich, alone, refers 50-60 adults a year not including the dozens of trans teens not yet in the adult system. It recently shifted its gender dysphoric population from Charing Cross to Nottingham GIC, having also, in the past, used Dr Richard Curtis’ TransHealth in London.

UK Trans Info has an excellent resource offering waiting times and estimated trans population surveys of all the GICs every three months. Last year Leeds were quoting 4 years for first appointments and Sheffield over 18 months! Nottingham’s 8 months has risen to 12 and now 18-19 months.

There are 7 adult and 1 adolescent-teen GICs in England, serving England and Wales – Wales has none of its own and London’s Charing Cross GIC also serves them.  The Tavistock and Portman is the sole young person clinic in England, based in London, but with clinics in Exeter and Leeds.

Scotland has 4 adult and 1 adolescent clinic. Belfast Health and Social Care Trust runs an adult and separate “Knowing Our Identity” (KOI) service for children and teens.