About Me – Katy Jon Went

I am a bibliophile, logophile, xenoglossophile, cibophile, oenophile, porphyrophile, and more philes! I’ve studied at University and after: economics, statistics, computing, theology, archaeology, Hebrew, Greek, Arabic, Spanish, Counselling and more, but really I’d say I just study anything of interest, excessively and passionately, totally believing in auto-erudition and education, an autodidaskalos. (Ironically, the first time somebody told me I was erudite and autodidactic, I had to look up both words!)

Born in a Luton hospital where my sex and lack of breathing initially perplexed the medical staff, raised in Harpenden, educated at St Albans’ School where I once took a sixth form Economics lesson whilst a pupil and created a 3ft calligraphy school on vellum for the retiring headmaster. In 2020, I was invited back to the school to give a talk about diversity and transgender.

I went on to UCL, in London, to study Economics, Statistics and Computing but quickly gatecrashed Psychology lectures and began learning extra languages. Spending summers abroad and later two years working there, I lived in Andalucia, Spain. Currently, I reside in Nelson’s Norfolk, the fine city of Norwich, and it is exactly that, a hidden gem without a motorway or convenient way to escape once established here – and why would you? A “fur-lined rut” it was once described to me as!

I grew up barely sleeping and devouring a book a night, but due to not feeling like I fitted into any of life’s stereotyped options around gender, social behaviour or sexuality, I repressed (aided by conservative upbringing and religious values) my non-conformity until it burst out with a vengeance mid-life.

Yes, I’m now in my 50s (b.1967 back when binary heterosexuality was still the legal and social norm).

My upbringing was Christian – CofE, then evangelical, then charismatic fundamentalist but after going through conversion therapy/deliverance and church expulsion for being trans, I’m very much agnostic now. After University, I did courses in Hebrew, theology, Arabic, archaeology to study the Bible in its cultural context, archaeological background, and original Hebrew and Greek languages and idioms. In the process, I dumped the selective literalism of evangelical fundamentalism and subsequently became interested in the language, spirituality and sociology of religion(s) but have retained the healthy ethics of Christian love and Jewish joie de vivre – lechayim “to life in all its fullness”!

I have worked as a photographer, taught theology, written a Hebrew course, run a software company, worked in PR, done local radio, done web/SEO/Social Media consultancy, and am very involved in the LGBTIQA+ activism world, educating and training on gender, sexuality, mental health awareness, and against all forms of stigma and prejudice, hate and human rights abuse. Hence, I’m now regularly to be found at political and panel events debating and trying to change the state of society to a win:win for all, whilst still being an advocate of free speech and healthy debate. 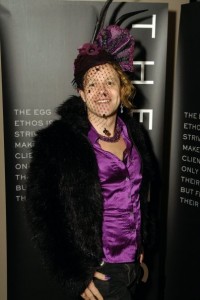 I came to terms with both my sexuality and gender variance over recent years. When I was 21, some Christians, I was then working with, tried to deliver me of being trans, and to repent of pan/bisexuality – well I’m now post-gender and asexual. Neither prayer nor therapy could heal me, but coming out did, even if I was part-outed! If the truth is meant to set us free, then being true to my authentic self, has freed me.

I was married to a psychiatrist and had a habit of subsequently dating therapists of all kinds! My main family consists of a dozen cats.

I am writing about a dozen books, one may perhaps get finished! Subjects are as diverse as I am, e.g., The Art of Conversation and Dialogue; Courage & Self-confidence; Being Bipolar; The Most Reluctant Transsexual – Not another Trans Autobiography; Fifty Shades of Gender; Hebrew Words and Ancient Philosophy; a Cook book, and a bisexual dystopian futuristic novel with roots in the Greek past and present.

I’m also a human book, ready to be read by members of the public at Human Library events, in order to challenge prejudice and overcome stigma, hate, judgement and the misunderstanding of those who experience negative reactions from some people in society. I’ve used the following book titles to describe aspects of my life that people can engage with and then discover the rest through dialogue:

I love words, and when I say love, I mean I am addicted to long ones, old ones, new ones, filthy ones and I use way too many in every article, talk, gig and general conversation. What people don’t realise is that my racing mind means the very full output they hear or read is already me slowed down, 80% of what I think or want to say is already restrained, edited, held back. 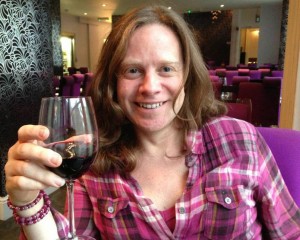 I do quieten down briefly for my love of fine food, vintage Rioja, cooking, entertaining and pampering friends and house-guests. I do believe in a bit of benign decadent sybaritism – especially when shared with friends.

I spend my days mostly writing, reading several daily papers from across the political spectrum and international news websites, supporting gender non-conforming people, liaising with Police and public sector over LGBTIQ, invisible disabilities and other issues, and from Spring to Autumn – gardening and cooking. Like a rescued hedgehog I looked after, I spend most winters in hibernation.

I often speak at events and conferences usually on LGBTIQ, mental health and human rights topics, but I also do stand-up comedy, sometimes described as educational, dark and intelligent with lots of long words and innuendo – “edutainment”.

I love foreign movies especially Pedro Almodovar Spanish ones, Scandinavian dramas like Borgen and The Bridge, films about gender non-conformity or ones that pass the Bechdel test and contain real female roles, or future dystopias, vampires (True Blood etc), fantasy (e.g., Game of Thrones) and Sci-Fi (Doctor Who, Star Trek, Star Wars, Firefly, Blakes 7…), and of course Sherlock and Sense8.

In 2012, I had a 25-minute film documentary made about me by two wonderful visual anthropologists. Called “What Katy Did” (15) it was shown at World Pride Film Festival, Cardiff Iris Prize Festival, Zürich Regard Bleu Festival and Norwich Cinema City. It can be seen online here, along with a short Doctor Who based mental health film made in a morning and various other TV appearances including BBQ “Queer Britain” and “Who or What is a Woman”, as well as local news interviews.

I speak half a dozen languages to basic levels, Spanish reasonably well – having lived there for 2 years and have studied even more besides from Hieroglyphs to Swahili, although about all I can remember in the latter is jambo, hakuna matata, and panya kubwa “big rat”.

I’ve travelled extensively in the Middle East, Egypt & Kenya, as well as Europe and the US – I’d still love to visit South American, India, Japan, China, Cambodia, and Ireland – mainly the library at Trinity College, Dublin! 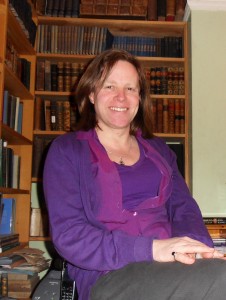 I have a book collection of over 6,000 titles at home, many antiquarian, the oldest is from 1519. I positively salivate in National Trust libraries at the sight of calf vellum and leather bindings!

“…it is true that the sight of a lot of books gives me the hope that I may some day read them, which sometimes develops into the belief that I have read them.” – Kenneth Clark, critic & broadcaster

I garden, cook and eat ethically and healthily but omnivorously, much homegrown in the large Victorian vegetable garden, fruit orchard and surrounding woods full of wild mushrooms where I live in semi-rural Norfolk, UK.

I play guitar and piano (Bach, Beethoven and Scott Joplin mainly), once played the violin rather badly, and studied music theory, harmony and composition to Grade 8.

I love life and being who I am – it is the only route to happiness, and believe me I’ve tried the alternatives – denial, repression, depression, suicide. I still suffer from insomnia at times, bipolar mood swings, eclectic colour-categorised house, cluttered thoughts and speech, but I’ve learned to celebrate and enjoy the highs and be self-aware and mindful during the lows.

I did my first TEDx talk in 2018 on authenticity and being different/yourself. It was petrifying to do, which just goes to prove that you never really leave fear or nerves behind!

My preferred pronouns are ‘they’ > ‘she’ > ‘he’, in that order; I rarely take offence and am more interested in education and engagement. I surgically transitioned in 2016 and am all the happier for it, loving my now non-binary self, aka a person, to the full.