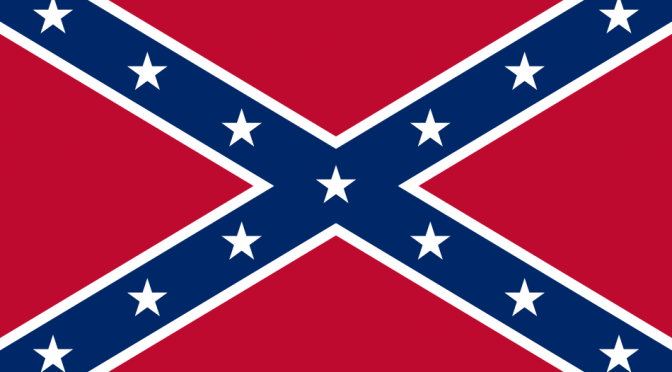 The Confederate Flag – a stained or Stainless Banner?

The last fortnight has seen people simultaneously complaining about the flying of the “Rainbow Flag” and the “Confederate Flag” in the USA. In the UK, the “Union Jack” or more often the “St George’s Flag” of England has been hijacked for nationalist ends too. In the Scottish independence vote the “Saltire Flag” was flown for both ‘yes’ and ‘no’ campaigns and nobody objected to a strong sense of Scottish identity, so why not the American South?

Current Reactions to the Southern US Flag

In 2011, a Pew Research Center poll demonstrated that the majority of Americans don’t react to the “Southern Flag” and that 9% view it with positive pride, however, some 30% have a “negative reaction” when they see the Confederate flag.

Two years, later and a 2013 YouGov poll revealed 38% public disapproval of flying the flag in public places. Even more, around 44%, viewed the flag as a symbol associated with racism, rather than just 20% seeing it as symbolic of Southern pride.

Back in 1961, in the middle of civil rights and race activism, the South Carolina State Senate raised the Confederate flag on top of the Senate dome, where it remained until removed in 2000 when an alternate flag was instead flown from a flagpole in the grounds. It was this flag that was removed by protestor Bree Newsome on 27 June, this year. The flag, clearly, remains divisive.

Nationalism is not a negative concept in itself, nor indeed are regionalism and localism. Being proud of your place of origin, wanting autonomy, independence, freedom, and asserting these things is not wrong. Even for a personal identity, rainbow flags and now many others, e.g., trans, non-binary, etc, are flown and worn at LGBT Pride events across the world. Flags unite, they are a banner under which to stand and draw people together – or symbolise rebellion against the establishment and regional pride as with Confederate flag adorned General Lee in the Dukes of Hazzard:

But they can attract opposition too, and be used for aggression. Sometimes, going so far as to create a virtual or real barrier to keep people separate, outsiders out, spewing xenophobic bile about non-locals, inciting hatred and violence against immigrants, migrant communities, or those who are markedly different.

UK Independence and the Far Right

In the UK – Scottish, Welsh, and Irish independence are looked upon favourably in cultural and political terms but, somehow, English nationalism is seen as far right extremism – and many times, it is. The debate over English votes for English laws is the trade-off for giving more power to Scotland to avoid secession from the Union.

I remember the 1980s when Irish terrorism or freedom fighters, depending upon your definition, was still rife. When, even in Wales, the BBC‘s Not the Nine O’Clock News team ran the insensitive but funny sketch, “Come home to a real fire, but a cottage in Wales”, owing to the Welsh nationalist arson campaign against English second homes in Wales.

In English terms, we have witnessed the rise of a “Far Right” English nationalism: BNP, Britain First, EDL, UKIP etc. Hardly groups promoting English ‘culture’ but certainly fostering a “batten down the hatches” against ‘foreigners’ attitude. At public rallies they wrap themselves in English rather than UK flags, thus tarnishing the English St George’s flag.

William Thompson and the Stainless Banner

So, has the Confederate flag been similarly tarnished by the racist hatred of one warped young man in the Charleston black church massacre? Did it always and forever have the meaning of white supremacy? Some articles doing the rounds would suggest that it does, a “heaven ordained” white supremacy at that, according to its designer, William T Thompson.

Thompson was co-founder of the Savannah Daily Morning News newspaper in the 1850s and in the 1860s, along with one other, produced the design of the “Stainless Banner“, which came to be used as the Southern Confederacy’s national flag from 1863 to 1865, replacing the “Stars and Bars” which too closely resembled the ‘Yankee’ Union flag. Thompson said, in April 1863, that he opposed it, “on account of its resemblance to that of the abolition despotism against which we are fighting.” Many agreed that a flag that bore any similarity to the “Stars and Stripes” was wrong on the grounds of the South not wanting the emancipation of slaves.

The “stainless” aspect referred to the pure white field or background taking up the majority of the flag’s design. Though, later criticised and dropped for its association with surrender and truce, that element to Thompson and others represented the supremacy of “The White Man” and “the cause of a superior race”. Not far off Hitler’s ideology?

It should be remembered though that the second Confederate flag (there were three and many modifications over the years) of Thompson included the now familiar Southern Confederate flag (white stars on a blue saltire cross on a red background) as its upper left element (where the stars and blue background are on the modern US flag). That flag element, also known as the “Battle Flag” was the banner of the Northern Virginian and Tennessee armies and several naval units. It was, however, never a united Confederate flag despite now being called the”Rebel Flag”, “Dixie Flag”, or “Southern Cross”, indeed, it is alleged that the cross would have been upright rather than diagonal had its designers not wanted to keep the Southern Jews on side.

How Symbols and their Interpretation change

Speaking of the Jewish people, a symbol of hate, the Swastika, was originally a symbol of benign fate and good luck in the Sanskrit language and religious cultures of Hinduism, Buddhism and Jainism. The Svastika or Gammadion Cross (based upon four Greek capital Gamma letters), Cross Cramponnée, or Manji, has been around for at least two millennia, if not ten (its first use can be traced back 10,000 years to a paleolithic settlement in modern Ukraine)!

The Nazis did not invent or invert it, they simply stole and reinterpreted it. Hitler allegedly believed the Aryan Germans were a supreme white tribe of Indian origins and semi-divine status.

Thus, though Thompson’s “Confederate Flag” had white supremacy links, the lack of white on the current flag bears no relation to that. It does, however, have associations with Southern independence and battle against the Union and what the North stood for, including an end to slavery. Hopefully, few would argue for the return of slavery now, whether some still consider African-Americans ‘inferior’ is another matter. It it, therefore, debatable whether the flag when displayed now still has the associations of the past. Now it is more likely to be flown for reasons of Southern pride and freedom from Washington’s centralised federal governance. If it is also used by minority white supremacists and a hopefully isolated and not to be repeated white ‘terrorist’ attack against a black church (others have been arson-attacked recently though) then it clearly has negative associations for a sizeable group of the US population.

Symbols and meanings do evolve, get reclaimed, and reinvented. Removing the Southern flag from buildings may seem like an extreme reaction and is a matter of some sensitivity to both victims of race/colour hate and to proud fliers of Southern identity – which in the majority, it is hoped, are no longer inherently racist. Bree Newsome believes it is time for change:

“It’s time for a new chapter where we are sincere about dismantling white supremacy and building toward true racial justice and equality.”

Debate is needed on this and how to go forward respecting individual freedom, collective identity, and historical issues. Is flying the flag, indeed any flag, a soon to be proscribed act? In the UK only today, a man was stopped and not charged for wearing an Islamic State black flag whilst walking through Westminster, London.

The difficulty is ascribing guilt by association – do all flags have only one meaning? Is flying the Confederate flag like flying a Scots flag, a symbol of regional Southern pride, or is it a symbol of rebellion and white supremacy? The Nazi or ISIL flag more clearly represent hate-based movements.

I’ll leave the last word on flags to Eddie Izzard: