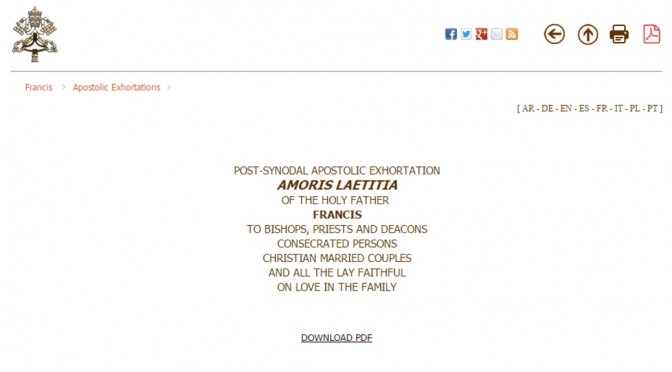 After two years in the making, the Roman Catholic Church and Pope Francis‘ publishing of a “landmark papal document“, Amoris Laetitia – “Joy of Love“, actually says a lot (around 260 pages) but very little that’s new. How could it, when innovation or theological development is anathema to tradition, dogma, and infallibility? The exhortation seeks to be compassionate, merciful and pragmatic, rather than legalistic or judgmental, yet in reality is no less rigidly orthodox in terms of doctrine and offers little prospect or hope of change for LGBT inclusivity or other alternative relationship realities.

The document fails to be the “positive vision of sexuality” that it purports to be and is critical of the so-called “obscure need to
‘find oneself'” (#153). Unless churches acclimate and accelerate, in their acceptance of modern love, their message of love and finding oneself (“in Christ”) will be increasingly left behind and irrelevant.

Theology of the Body

The current Pope reaffirms John Paul II’s ‘theology of the body’ (1980) teaching that sexual differentiation leads to both reproduction and the “capacity of expressing love” (#151). By continuing to root the expression of love in both reproductive capacity and dimorphic bodies, he rules out same-sex love and families.

It is a shame that the Pope, in relegating some of Paul’s teaching to the cultural matrix and context of patriarchy and female submission (#154-156), does not use the opportunity to recognise the cultural moving on of society on sexuality, despite overtures to feminism and sex equality.

“I certainly value feminism, but one that does not demand uniformity” (#173)

Although placed in the context of parenthood, he says, attitudes to gender roles remain traditional – men, particularly fathers, should be:

“possessed of a clear and serene masculine identity” (#175)

“the clear and well-defined presence of both figures, female and male, creates the environment best suited to the growth of the child…children need to find a father waiting for them when they return home with their problems.” (#175-177)

No room for same-sex parenthood or adoption, then. Nor of alternative masculinities – female, transmasculine or effeminate.

In a section on the foetal child he writes that:

“all the somatic traits of the person are written in his or her genetic code already in the embryonic stage.” (#170)

That being the case, why continue to reject people on the basis of their probably mostly genetic sexuality? Why fail to condemn reparative therapy for homosexuality (‘unwanted same-sex attraction’) or gender identity? As if the genesis of our innate coded lives can be rewritten by prayer, healing and therapy, to undo that which seems to go against doctrine, but which, in fact, to do so would be to go against nature. The nature of our selves, rather than a nature seemingly defined by ancient laws.

On “persons who experience same-sex attraction” Pope Francis described the situation as not easy for either the parents or the children:

“We would like before all else to reaffirm that every person, regardless of sexual orientation, ought to be respected in his or her dignity and treated with consideration, while ‘every sign of unjust discrimination’ is to be carefully avoided, particularly any form of aggression and violence…” (#250)

… but not discrimination in sex, love or marriage, then, that would be presumably be justified discrimination. Marriage and intimacy remain strictly heterosexual and for non-divorcees, since divorce remains “evil” and gay relationships “intrinsically disordered”.

“Such families should be given respectful pastoral guidance, so that those who manifest a homosexual orientation can receive the assistance they need to understand and fully carry out God’s will in their lives.” (#250)

I wonder whether “assistance” includes the psychologically deprecated reparative therapy? It’s certainly not been condemned, whereas most international psychological, psychiatric and psychotherapeutic bodies have banned it.

“In discussing the dignity and mission of the family, the Synod Fathers observed that, “as for proposals to place unions between homosexual persons on the same level as marriage, there are absolutely no grounds for considering homosexual unions to be in any way similar or even remotely analogous to God’s plan for marriage and family.” (#251)

Furthermore, the Pope argues that international poverty aid should not be dependent upon countries introducing LGBT equality laws.

Curiously, at (#121) in the Papal document, he cites the trinity of Father, Son and Holy Spirit, as an example of conjugal loving unity – hardly the best analogy if you want to avoid references to threesomes, same-sex relationships, or children born outside of wedlock!

Furthermore, at (#122), his concept of marriage mirroring the love of Christ for the Church fails in portraying only a narrow heterosexual conjugal union rather than that put forth in St John’s Gospel:

The world includes all people, not only married straight people who’ve never divorced.

I still find it incongruous that a celibate and single Pontiff can preach to others about marriage, love and sex.

The idea that faithful marriage for life is a “natural inclination” (#123) also seems to go against scientific and social realities. That statement, from the Pope, is followed up with a barely veiled criticism that broken marriages or relationships outside of “unto death… commitment” are, by their nature, “weak or infirm”, and “ephemeral” (#124).

Modern understandings of psychology and psychotherapy might also have an issue with the idea of complete ” surrender” of “our future entirely to the one we love”, although he is critical of past expressions of patriarchal dominance within marriage.

As a result, contraception and abortion remain absolute wrongs, leaving women not in charge of their own bodies.

“No alleged right to one’s own body can justify a decision to terminate that life.” (#83)

This puts the Pope firmly in US Republican Donald Trump’s, Poland’s, and Irish/Northern Ireland Catholic camp on the illegality of abortion at all stages of foetal growth – all places that have recently featured calls to keep or extend anti-abortion laws. Despite Pope Francis saying Donald Trump is ‘not a Christian’.

In summary, however forward thinking the Pope may seem, the language compassionate and merciful, the tone accepting and gracious, the theology remains stuck, rigid, intransigent. The words may change, the attitudes may soften, but the laws remain as seemingly writ on stone as ever before. No good news for LGBT Christians. Read the full text of Pope Francis’ Amoris Laetitia – “Joy of Love” for yourselves.