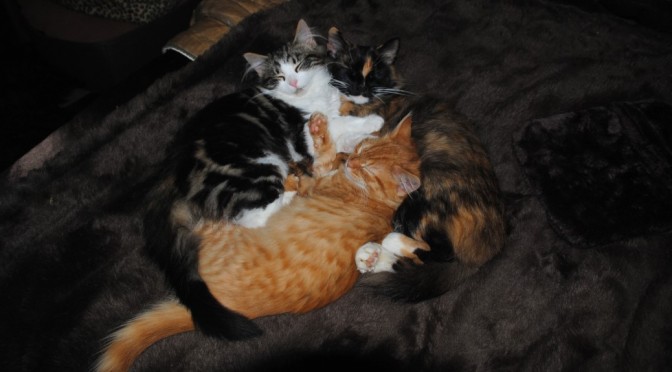 National Hug Day was an idea put forward by one Kevin Zaborney in 1986. Whilst January 21 was not overly significant it fell halfway between New Year’s and Valentines. Zaborney thought US society was “embarrassed to show feelings in public” and hoped a National Hugging Day would help change that, but actually didn’t hold out much hope that it would catch on. Well it did, and nearly 20 years on, folk are still hugging. (If you want more cuddling cats then read to the end!)

Across several continents, during public demonstrations or random acts of kindness, one can often witness people offering “FREE HUGS”. A phenomenon that began in Australia around ten years ago and has since taken off everywhere.

Over 77 million people have watched this “Free Hugs” video:

I’ve participated in Free Hug events, even a public mixed-sex kiss-in to challenge public perceptions of same-sex displays of affection and homophobia. I’ve also done cuddle workshops, had cuddle buddies, and queued for hours to hug with Amma, the 34-million-people-hugged queen of hugging. Amma, or Mata Amritanandamayi, says her only religion is love. Hate and war aren’t working, so perhaps we need a revival of 1960s-70s peace and love.

As an atypically unreserved Brit, I can safely say that most of us consider our American cousins overly huggy, not me I can’t get enough of them – giving or receiving. That said, research has also shown that many European nations, such as the French or Spanish, spend even more time hugging or kissing.

In the midst of the Ferguson riots and response to the Michael Brown shooting one good news story emerged at a Portland demo, that of a kid offering hugs, even to a policeman. Devonte Hart was photographed hugging Sergeant Brett Barnum. According to the original Oregonian article, Hart was holding a “free hugs” sign. Barnum called him over and they talked about the demonstration, school, life and art. Afterwards, Barnum pointed at his sign and asked: “Do I get one of those?”

Commercial Cuddles by the hour

One woman in America has seen her cuddle-by-the-hour at $60 a time therapy business take-off with 10,000 enquiries in the first week! The www.CuddleUpToMe.com site, aka Samantha Hess, offers safeguards and various non-sexual options. She describes herself as a “professional cuddler” and offers to be the “big spoon or the little spoon”, although she is a petite 5ft tall, height is barely relevant when lying down.

Even in the usually reserved and private UK there are cuddle meetups, parties, and workshops, to be found.  Bastion of poking fun, The Daily Mail actually has a healthy write up about one. Anna Shekory of Cuddle Workshop and Tom Fortes Mayer of FreeMind are involved in the UK workshops and meetups.

“Cuddle Workshop is not affiliated with Cuddle Parties in the USA. We are similar yet different from Cuddle Party. Like them, we offer a safe boundaried space to explore nurturing non-sexual touch.”

Oxytocin the oxygen of happiness

Call it human comfort, closeness, community, or what you will but one chemical name it goes by is Oxytocin, the cuddle compound, hug hormone, and slightly more doubtfully, the moral molecule.

Oxytocin is my drug of choice. Oxytocin is a very potent and powerful hormone. When we hug, kiss, or share closer intimacies our oxytocin levels shoot up. Half-a-minute’s hugs can raise oxytocin levels and maintain them throughout the day. Hugs have been shown to act an as anti-inflammatory healer, pain relief, mood relief, counter stress and anxiety, increase generosity, trust, ease PTSD, aid social bonding in autism, relieve heart pressure and more!

More oxytocin means less stress, mental and cardiovascular, and an improved immune system. According to Dr Zak, author of “The Moral Molecule“, even hugging strangers releases the oxytocin sense of wellbeing, so long as the hug is permitted and welcomed, I would hasten to add, nor an excuse for a fondle or grope.

Neuroeconomist Zak, or “Dr Love”, calls oxytocin our “social glue” and according to one interviewer has all the appearance of “having been constructed in a laboratory charged with creating the ideal deliverer of TED talks”.

Zak encouraged skeptical New Yorkers at an event called Love Night to embrace each other, “If it works on 500 random New Yorkers, it’ll work for you,” Zak says.

TV and Social Media can be good for you

Feelgood movies can lead to a 47% surge in oxytocin levels. Television can actually be good for you! Especially, if watched whilst cuddled up in bed or on the sofa with another warm human being.

Even Facebook is good for you, or can be when used for positive social interactions in the absence of face-to-face possibilities.

“Social media is often heralded as the end to meaningful interaction” but science can demonstrate a different story. “While studying people’s oxytocin levels after using Facebook and Twitter, Dr. Zak saw oxytocin release in every participant…Though in-person interactions are much richer, he says, there’s room for the Internet.” Commenting on a Twitter experiment, Zak says:

“Your brain interpreted tweeting as if you were directly interacting with people you cared about or had empathy for, E-connection is processed in the brain like an in-person connection.”

It is also showing up as a drug to aid against obesity, act an as anti-inflammatory healer, pain relief, mood relief, counter stress, increase generosity, trust, and more. Indeed, “oxytocin is proving to be a crucial ingredient to what makes us human”.

“Studies are showing that it may be effective in treating debilitating shyness, or to help people with social anxieties and mood disorders. It’s also thought that oxytocin could help people suffering from post traumatic stress disorder. In addition, given that autism is essentially a social communication disorder, it’s being considered as a way of helping people on the spectrum as well. And lastly, oxytocin, through its trust-building actions, can help heal the wounds of a damaged relationship — another example of how the mind gets its plasticity.”

The realists and skeptics out there may need to read something more balancing, such as this piece by Ed Yong who kicks oxytocin and Dr Zak back into touch. Further pointing out that for some the benefits may only enhance your pre-existing mindset. One study showed that oxytocin actually caused less trust and cooperation among people with Borderline Personality Disorder (BPD).

Amanda Palmer in the Guardian writes that if she “were queen for a day, cuddles would be mandatory. I would counter the epidemic of human encounterlessness with cuddle centres for those who never get a proper hug.”

If you are one of the 7-8 million single people or third of the UK that will be living alone as we age, then if the encounter with a cuddle party, meetup or professional cuddler, is just way beyond your British reserve or shyness, what can you do?

If cuddling is out of bounds, try petting

Clinical psychologist Dr Glenn ­Wilson suggests that “getting a kitten and petting it might have a similar soporific, calming effect.”

That may explain the equal rise of cat cafes and the opportunity to go and cuddle a kitty, or some other furry, if you live alone in rented accommodation that bans pets. People with pets apparently recover faster from illness and find their stress levels reduced. It may also be easier to maintain one’s boundaries with a cat!

Okay so they may not bring about world peace just yet but they can comfort or console what they can’t cure! So have a hug or pet a cat on me today!