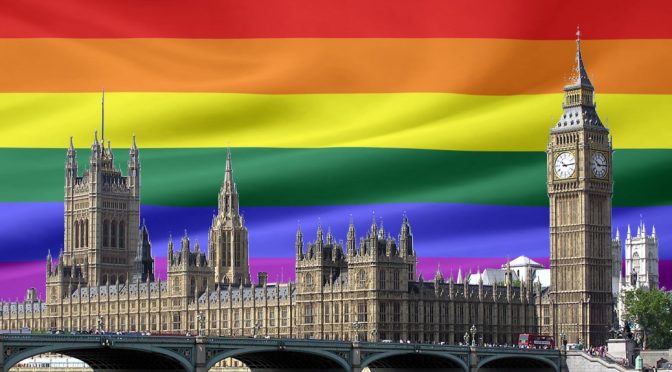 Just how representative of the UK population as a whole were prospective parliamentary candidates and elected MPs in terms of gender, sexuality, disability, religion and colour/race/ethnicity? 97 new MPs joined the house, and Ken Clarke MP was re-elected as its oldest member and Father of the House. It is well known that, hitherto, the UK had the most LGB ‘out’ Parliament in the world, but not the most gender balanced, how has that changed after Theresa May‘s snap general election?

2017 sees 208 female Members of Parliament, up from 191 in 2015 (196 after by-elections). There were many seats where both the main candidates standing were female. 29% of candidates were women, 32% of those elected were – both records for the UK but not the world.

Labour fielded 40% women, the Green Party 35% (statistically, of course, 100% of their MPs are female!), UKIP had 13%. Of those elected, there is wide variation among the political parties. Labour have 45% (119) and their leader in Scotland but never England (except as caretaker). Meanwhile, there are just 21% (67) among Conservative MPs despite a history of two Prime Ministers and their leader in Scotland.

Interesting that the DUP, the Conservatives in Scotland, and the Tories in England and Wales are all led by right-wing women, one of whom is anti-gay, another is gay, and another shifted to same-sex equality (through persuasion by a female LibDem MP) after a prior voting and campaigning record against it. Being a woman, it seems, is little impediment to political power in the UK. Indeed, add in Plaid Cymru, SNP, and for two weeks, even UKIP, only Labour (England and Wales) and LibDems haven’t been led by a woman.

Being female is no guarantee that one will hold pro-equality, pro-LGBT views. We now have a triumvirate of female-led parties forming a “confidence and supply” alliance to keep the Tories in power that may be in breach of the Good Friday Agreement.

Seven Trans and two Non-Binary candidates stood (just 4 in 2015, so, more than doubling) but none were elected, several have stood in council elections before. Eddie Izzard continues to hint that he may stand as an MP.

UK LGB MPs are the highest proportion anywhere in the world. We have the most rainbow Parliament – quite an affront to the homophobic DUP with whom 19 LGB Tory MPs may now have to do electoral business with.

Since 4.5% of the people standing for election (147/3304) were openly LGBTQ, it means that LGB candidates are up to 1.5x more likely to win. Tories and Labour had 7% LGBT candidates, SNP 17% and 20% of their elected MPs, despite reduced numbers. Surprisingly, only 2% of Greens (same as UKIP!) and 4% of LibDems were. White gay men outweigh any other LGBTQ demographic 5x and are the most likely to be elected. Curiously almost zero LGBT candidates stood in Greater East Anglia! There’s an opening for me yet 😉

Of the 147 LGBTQ candidates, just one was BME, in 2015 that was two – both shamefully low, though we don’t know the number of non-out candidates. However, 51 BME MPs were elected on 8 June – an increase of 10. At 7.8% this is just over half of the 14% general population representation.

Britain also elected its first MP of Palestinian heritage as Layla Moran for the LibDems “overturned a Conservative majority of almost 10,000 votes to win the Oxford West and Abingdon. Moran won the closely contested election by only 816, gaining 26,252 votes.”

Just four openly physically disabled MPs were elected, 0.6% of Parliament, compared with 16% of the UK. Mental health is so stigmatised, one wonders if it were possible for someone to be ‘out’ with a diagnosed long term condition and an MP, other than depression and anxiety that affect 1-in-4 of us, and undoubtedly affect MPs similarly. It would be great to see a bipolar MP, to show it is possible to manage a bipolar life.

The new Parliament sees the UK’s first female Sikh MP, Preet Gill and its first turbaned male Sikh, Tanmanjeet Dhesi. Both are Labour MPs. In the past we’ve had 5 Sikh MPs in the last 15 years but never wearing a turban in the House of Commons.

In the wake of the Manchester concert bombing, it is perhaps significant that the city elected its first Muslim MP, Afzal Khan – who was also ten years ago their youngest and first British Pakistani and Muslim, Mayor of Manchester.

It shouldn’t matter, but it is interesting nonetheless with accusations that the Tories were run by the Eton and Bullingdon Club set, and even many who stood as Labour leader being Oxbridge educated.

The Sutton Trust believes that 51% of MPs were educated in comprehensive schools, and just 29% at public schools (ie privately educated). It is still disproportionately biased to private education, therefore.

In conclusion, our LGB representation continues to be the highest in the world, across the three largest parties – but not elsewhere, and close to the assumed proportion of the general population. Several Trans, Non-Binary and similar, stood but at 9 out of 3300, they are about 10x underrepresented in standing, and to date unelectable; are they being stood as no-risk candidates in unelectable areas, that’s an analysis I’ve not done yet. On gender, we are getting there slowly, but ranking 39th in the world is a poor result, albeit an improved one. Realistically with parenting issues, 45% of Parliament would be a good showing for women, rather than the 32% we have. BME and disability remain woefully underrepresented. How a Tory deal with the DUP, who are anti-diversity on just about every count, can be squared with Parliament and the electorate’s ever-progressive diversity, remains to be seen.