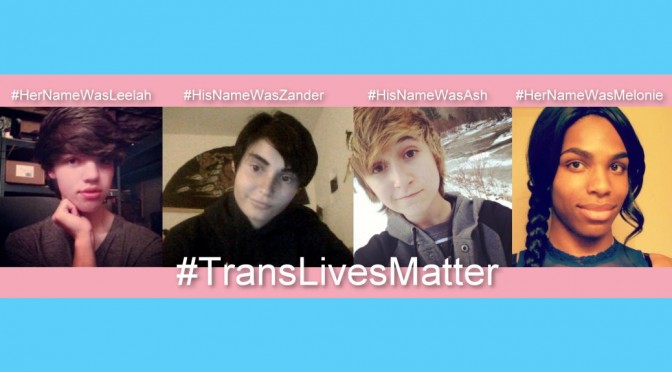 Here in the UK, February was a month of LGBT History celebration and education but instead of lives remembered the US is memoralising more trans teen lives lost – not to mention the “eight trans women [who] have been murdered in the US so far this year“.

It is with great sadness, therefore, that I’ve seen reports of yet more trans suicides in America, not dissimilar to Leelah Alcorn who took her life at the end of 2014. That at least three trans teens took their lives, in the US alone, during February, is a measure of how far LGBT education still has to go.

Another 13 year old trans boy, Damien Strum, ended up in a psych ward after also trying to take his life. Although the facts surrounding this particular teen are somewhat hard to confirm and any privacy should be respected.

On Instagram, Damien had shared, like Leelah Alcorn had, about wanting schools to provide better gender education “of all the other genders”. Leelah has said, “Gender needs to be taught about in schools, the earlier the better“.

A blog post entitled “Let Him Dance” is subtitled “Protecting Gender Expansive Youth” and encourages us that:

“We need to stop viewing gender as a binary, because some young people don’t have those easy answers, and they deserve to feel safe and confident in themselves and the people around them. No matter what. Gender is a spectrum. It’s not black and white. There is no ‘opposite’ gender; the binary concept fails to capture the rich variation that exists within gender identity…Every single young person who is fighting to define themselves — trans kids, queer kids, gender fluid kids — need to be protected. They need to belong.”

Over LGBT History Month I had several opportunities to speak in schools, a university and elsewhere educating and raising awareness of LGBTIQ experiences. I especially drew attention to young people’s LGBTQ identities, often asexual, bisexual, genderfluid and outside the binary or with newer MOGAI (Minority Orientations Genders and Intersex) labels that many older gay, lesbian and trans people might struggle to recognise – indeed, I had to research many of them myself.

“I need to know that I am loved and accepted and believed in, and that life has a point and I will find it someday. That’s just getting harder and harder to believe.” — A gender-expansive youth documented by Human Rights Campaign

Zander, born Sandra, by his own admission, was a young trans teen, male identified, so a boy. He was just 5’2″ in height and that bothered him. As with many young queer tumblr generation teens he was clued up on his self-identified labels, describing himself as “panromantic-asexual”:

If you’re still reading this it’s probably too late for a trigger warning about suicide (not to mention sexual assault). Having attempted to take my own life on more than one occasion I’ve no problem reading about this, and see writing and talking about it as essential, not something to avoid, but I understand that it can be triggering for some, more often than not the siblings and families left behind.

That said, what follows is some parts of Zander’s suicide note, that like Leelah Alcorn’s was timed for a delayed tumblr release:

“I don’t know why I’m writing this now, it just feels like a good time. I’ve kept holding off from doing this since it’s probably gonna be long. It’s surreal right? And if I publish this (or don’t delete it from my queue, I should say) then that means I’m dead.”

“Dad, I’m sorry but your “little girl” isn’t a little girl. I’m a boy, in my heart. And no, that doesn’t mean I want to play football.”

Apart from gender dysphoria, a lot of Zander’s pain seems to stem from a known person sexual assault and family psychological abuse that he describes.

He left behind several messages for friends and romantic partners, telling them they weren’t to blame. In amongst one such note, he wrote:

I know that feeling. Sometimes suicide is not about the sum total of life to date, but the last straw, the exhaustion of struggling to survive another day, with no let up in both internal feelings and external circumstances. Often, it is no single thing, but a combination of factors, and a feeling of powerlessness to change them and the solitude of facing them alone.

“I’m sorry. I’m sorry I wasn’t strong enough, that I gave up. But I just couldn’t, I couldn’t take it anymore. I am a hypocrite, I’ve talked many of people out of suicide before but yet here I am. Or, here I was.

I’m not noble, I’m not really trying to make this mean something huge. I’m just a coward who wanted to cut my strings and be free from my troubles. Here marks the end of Zander, a meme enthusiast and, friend? I guess.

I can’t say I’m not a little bit afraid of dying, but we all are. It’s the fear of the unknown. Perhaps there is another world waiting for me, perhaps I will be reborn into something, or maybe I’ll just stop existing. Maybe I would be a ghost that would be cool don’t you think? I have no clue, like with everything else in my life I’ll just wing it.

So this is the end? I’m over 3,000 words now. Time will go on, hopefully no one will be too bothered from me for too long. Just continue as you normally would be, that is what I want.

I’m selfish, I’m sorry, I’m so sorry that I only think about myself in this situation. I know there’s going to be people hurt and devastated by this. And I’m so, so, sorry about that. I don’t know what else to say. I’m just so tired, I’m so tired and I just want to go to sleep.”

I recognise so many of those feelings, as much as suicide helplines exist, empathic Samaritans, even closest friends are out there, the darkness of dysphoric depression, ache of social anxieties, are best understood by those that have been there.  Family and domestic and sexual violence issues are something more broadly faced and understood. But nobody can be there for you 24/7 – and if anybody is, it would probably be your family, not much help if they are part of the problem and not part of the solution.

The American Institute for Suicide Prevention found that 46% of trans men and 42% of trans women have attempted to take their own lives. Furthermore, 57% of transgender people were found to have been denied and excluded by family members. 50-54% experienced bullying in school.

Whilst Leelah Alcorn found herself misgendered in death by close family, the funeral service, school and some news media outlets, a more aware Zander had probably learned from her situation and thus writes to two friends, Gabby and Katie:

“I want to ask of you both (especially you, Gabby) is to make sure if there are any memorials for me I want you both to make sure my right name and pronouns are used.”

Sadly, but not unsurprisingly, the family chose to use birth names and pronouns in the funeral and tombstone arrangements, as confirmed by a teenage friend present at the funeral. It seems supportive families of trans children are still the exception not the rule.

In response thousands took to twitter with the hashtag campaign #HisNameWasZander. Friends and supporters also put together a memorial blog on tumblr.

Also last month, Melonie Rose, aged 19, a transwoman of colour, took her own life.  Rather than rewrite what someone has written so well already, check out Dominick Evans’s report here. Dominick is a trans man and friend of Hunter, another trans man friend of Melonie’s, from whom much of the information about her life, death and misgendered memorial are drawn. #HerNameWasMelonie

After years of bullying, particularly after cutting his hair short and changing his name legally to that of his male gender identity, 16-year-old Ash Haffner stepped into traffic, like Leelah Alcorn, and ended his life on 26 February.

Ash’s mother told WSOC-TV that “Ash started enduring the most bullying when she cut her hair short.”

Whilst his mother was supportive of his transition she admitted to struggling with pronouns and still called him ‘she’ but did refer to him as Ash rather than by his birth name of Ashlyn.

Ash left a final note on his iPad saying:

“Please be WHO YOU ARE… Do it for yourself. Do it for your happiness. That’s what matters in YOUR life. You don’t need approval on who you are. Don’t let people or society change who you are just because they’re not satisfied with your image.”

Some people have warned of the risk of copycat suicides and suicide clusters but more worrying is the similarity of lived experiences of transphobia and family struggles to accept – conquering these, “fixing society” as Leelah Alcorn called for, would bypass any likelihood of contagious exit strategies.

Research on the possible factors leading to multiple suicide events has concluded that it is not media coverage in general but certain specific elements, which the Washington Post has reported on here, although calling it a suicide epidemic is unnecessarily alarmist.

The focus should be on creating supportive environments at home, school and in society, not creating a blame culture on social media – the very place that is often the only place some trans teens can go to for support – although it can often be a place of online bullying too.

It has been clearly demonstrated that parental attitudes have a huge impact on the mental wellbeing of transgender youth  and according to a 2012 Canadian report, can lead to a:

Without that support, some 57% of young trans people attempted suicide, even higher than the averaged-out figure for trans of all ages and domestic backgrounds.

“Ross” is a short video telling of the trials of being an FTM teen in a school and family environment.

Gender identity can be a matter of life and death, not an academic gender critical ideology, but a real lived – and sometimes died, gender dysphoria. #TransLivesMatter

Helplines in the USA