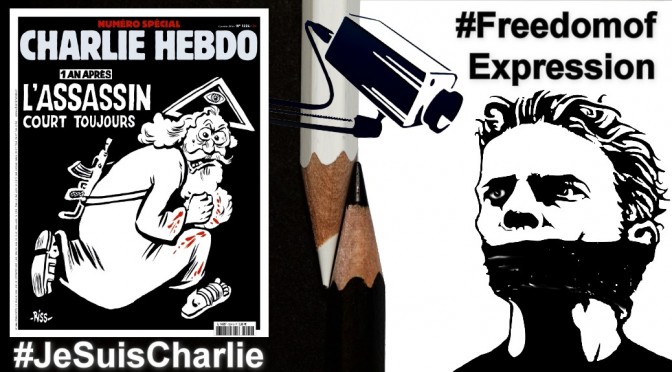 It is a year since the Charlie Hebdo shootings, already dwarfed as a massacre by the Paris attacks last month – two in a year of terror for France. Some countries witness those levels of extremist terrorist attack on an almost daily basis – Nigeria, Syria, Iraq, Libya to name but a few. But these two atrocities brought it home to Europe. The result? More fear and less freedom. Today saw another shooting in Paris, this time of a man wearing a fake suicide vest, possibly expecting “suicide by cop” as a fast-track route to fanatical fantasy heaven.

“Perhaps the most far-reaching threats to freedom of expression in 2015 came from governments ostensibly motivated by security concerns. Following the attack on Charlie Hebdo, 11 interior ministers from European Union countries including France, Britain and Germany issued a statement in which they called on Internet service providers to identify and remove online content ‘that aims to incite hatred and terror.’” – PEN International

Some national responses have been to monitor more communication, restrict creative output and freedom of expression, shut down borders, target migrants. Some newspapers have fomented xenophobia by encouraging that fear of attack by certain minorities – namely all Muslims.

Other communities have risen up to support migrant peoples and minority sections of society, to engage with Islam and unite with the peaceful majorities within them. Vigils and campaigns calling for an end to retaliatory air strikes on Islamic State targets embedded in civilian populations have been held, so as to prevent escalation.

Last year pen and brush, stand-up and essay, fought back against the terrorists and the censors. My fear is that we will see more censorship and not less in 2016. The whereabouts of five missing booksellers and publishers in Hong Kong is unknown. Cartoonists, bloggers, and journalists, around the world remain in prison or disappeared.

Whilst everyone is criticising Saudi Arabia over its executions and inflaming conflict with Iran, remember that it is Iran which imprisoned a female political cartoonist – Atena Farghadan. That is not to say that the cartoons and comment themselves should not also come up for criticism – but it is the very freedom to criticise that we need to preserve, it is the sign of a safe society that we can.

Apart from Atena, attention has been drawn to the Malaysian cartoonist Zunar facing decades in prison. Cartoonists have rights too, something which Cartoonists Rights Network International campaigns for, supporting targeted political cartoonists and “protecting free speech and right of expression.”

Freedom of Expression is Sacred

Freedom of expression is a legal and moral right, protected in international law (Article 10). Republished today, an article from January 2015 in the Catholic Herald, speaks of:

“a moral duty to mock religion”

All religions. All philosophies, ideologies, political views need challenging. Humour is a necessary part of the debate to prevent people taking themselves overly seriously and as an essential barometer of freedom itself. Laws that say you cannot ridicule the leader, party or religion, are by their very existence signs of repression.

In Islamophilia (“the disproportionate adoration of Islam”), Douglas Murray draws attention to the fact that if we can make fun of Islam with impunity then there is less need to do so, but “until then, we have a moral duty to do so.”

“If somebody threatens to kill people who draw a cartoon because it offends them, the only proper response is not to agree to alter everything you draw in future or avoid certain subject matters: it is to keep drawing that cartoon until such a time as the people who do the complaining stop. And then you stop doing it because it’s no longer necessary – just rude.” – Douglas Murray, Islamophilia

Charlie Hebdo made fun of everyone – including Catholics, Jews, and Muslims. In fact, analysis of its covers over the last ten years showed that Catholicism was targeted three times as frequently as Islam on its covers. Charlie Hebdo may sometimes confuse the direction of its punches – up or down, but these may be a matter of perspective. It has devoted many cartoons to critiquing EU policy and action towards migrants and asylum seekers.

A history of humour and ridicule

David Low was a New Zealand cartoonist who published cartoons depicting Hitler and Stalin in the UK during the Second World War infuriated the Nazis. Humour can humiliate and ridicule dogmatic ideologies – it is why historically it has been employed as a strategic counter measure. Nobody, within government at least, would dare do that currently, fearing that it would inflame the situation.

Low is but one in a long line of satirical and sarcastic commentators on society’s tyrants stretching back to biblical times, ancient Greece and Rome, eighteenth and nineteenth century Britain and France, to name but a few. It’s a tradition to be valued as much as any religious tradition. If we value freedom of expression at all, we must allow the freedom to criticise to co-exist alongside the freedom to practice any faith.