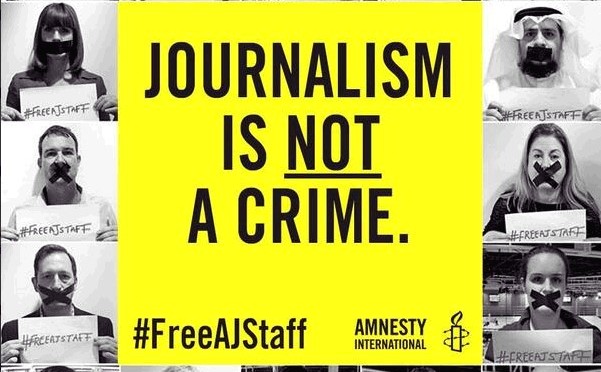 May 3 is the twentieth World Press Freedom Day, a day to be celebrated, whether you like the media you read or not. Doing their job and trying to write free of political pressure or censorship has meant 200 journalists are currently imprisoned worldwide in countries like Azerbaijan, Bahrain, China, Cuba, Egypt, Eritrea, Ethiopia, Gambia, Iran, Palestine, Russia, Rwanda, Saudi Arabia, Syria, Thailand, Turkey, Uzbekistan and Vietnam.

Freedom of the press means several things. Firstly it should be free of government influence, free to criticise in-power politicians, free to champion the causes of out-of-power ones and those who may have become political prisoners. As the recently deceased Tony Benn MP once said of democracy and those in power: “To whom are you accountable? How can we get rid of you?” – surely one of the tools of challenging politicians is a free Press which should go hand-in-hand with democracy.

No journalism will ever be completely free of personal or political influence, therefore to be truly free, we need journalism of all flavours, passions and persuasions. From long established broadsheet papers like The London and New York Times, The Telegraph, Washington Post and Guardian, to Internet HuffPost, Wikileaks and even tabloid or so-called “gutter press” papers, and combative Radio 4 Today Programme and interrogative Paxman Newsnights – they are all necessary. If we believe in freedom of speech/writing then we cannot seek to control that based upon personal preference for a different style of news or belief on what constitutes news.

“Our liberty depends on the freedom of the press, and that cannot be limited without being lost.” – Thomas Jefferson

Journalists should equally be free to write without editorial or media-owner pressure to toe a particular line. Any piece that bears their name should carry their opinion and theirs alone. They should even have input and a veto on headlines, which are so often written by others after their piece has been edited and approved. This is a part of journalistic transparency which we should be able to see in every article or story. Either in tandem with this, or in addition, there should be rules preventing monopoly and/or government ownership of the Press.

A sad but now inherent part of newspaper history was the so-called “Yellow Journalism” of the 1890s as William Randolph Hearst and Joseph Pulitzer II of Pullitzer Prize fame battled it out for readership, lowering the tone and truth of reporting in the process of pursuing profits over accuracy. We would now call much of this “Tabloid Press” now, though the shape and size of a paper need have no bearing on its quality of content. The “Yellow Press” has, however, still been responsible for bringing people and politicians to account, even if it can also be blamed for causing offence, ‘outing’ people – whether their sexuality, gender or infidelity, it has been cited in cases that have led to suicide – so I am not saying that the media is perfect, just that it is necessary in an open, if not for, an open society.

“Freedom of the Press, if it means anything at all, means the freedom to criticize and oppose” – George Orwell

Whilst writing should, in principle, be free of ‘hate’ speech, libel and slander, it must, however, be free to express opinion and should only incur sanctions when breaking human rights, equality and defamation laws. A right to disagree and be disagreed with is paramount to press freedom and journalistic integrity. That said, opinion pieces should have a right to reply and/or comment with moderators being sure to only police hate speech, insult and injury, and not rights to express personal, political or religious beliefs. Noam Chomsky said that “If we don’t believe in freedom of expression for people we despise, we don’t believe in it at all”, it is freedom for all or it is censorship. “You can’t pick and choose which types of freedom you want to defend. You must defend all of it or be against all of it.”, as Scott Howard Phillips said, albeit concerning the US 2nd Amendment and right to bear arms. In John Stuart Mill’s 1859 book, On Liberty, he wrote much that holds as true today, if not more so, as 150 years ago:

“We can never be sure that the opinion we are endeavoring to stifle is a false opinion; and if we were sure, stifling it would be an evil still.”

“The peculiar evil of silencing the expression of an opinion is, that it is robbing the human race; posterity as well as the existing generation; those who dissent from the opinion, still more than those who hold it. If the opinion is right, they are deprived of the opportunity of exchanging error for truth: if wrong, they lose, what is almost as great a benefit, the clearer perception and livelier impression of truth, produced by its collision with error.”

In the Danish political drama, Borgen (Season 2 Episode 2), the female PM, Birgitte Nyborg, is encouraged by her faithful friend and gruff colleague Bent Sejrø that a clever politician gathers around themselves people who may disagree with you. Not just as part of the episode’s Sun Tzu “Keep your friends close but your enemies closer” theme but in order to create better policy. Only surrounding yourself with people who agree with you will not save you from mistakes.

World Press Freedom Day was declared at the end of 1993 by the UN General Assembly. It is commemorated on 3 May, the anniversary of the 1991 Declaration of Windhoek (Namibia) to promote “Independent and Pluralistic Media”. Among other principles Windhoek declared that:

Back in 1946, the UN had declared “freedom of information” to be a “fundamental human right”. Press Freedom Day, therefore, seeks to:

On 1 May Al Jazeera English Egypt producer Mohamed Fahmy, who is currently under arrest and detention, was awarded the Canadian Press Freedom Award for a “Canadian journalist who has made an outstanding contribution to the right to freedom of expression in the face of inordinate persecution.” Fahmy had previously worked for the BBC and CNN, and wrote an account, Egyptian Freedom Story, of the Arab Spring of 2011. Fahmy has donated the $2000 prize money to the family of another journalist, Mayada Ashraf, who died whilst covering political demonstrations in Egypt last month. 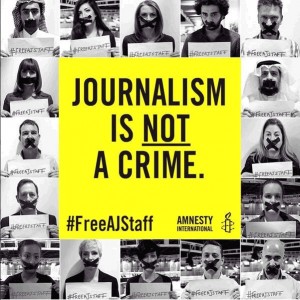 Among the hundreds of journalists gagged, detained, or killed, worldwide, are two other Al Jazeera English staff – former BBC journalist, Australian Peter Greste, and Baher Mohamed, held in detention by Egypt for “broadcasting false news” – for “false”, whatever your opinion, read “disapproved”. In the prison where they are being held pen and paper are banned yet the power of journalistic truth and persuasion won Fahmy access to them and he was able to smuggle out a letter this week:

“I hereby appeal to the global advocates of press freedom not to hold Egypt, the country of my birth responsible for our wrongful detention. Only certain individuals in the system who lack the understanding of the fundamentals of journalism are to be held accountable. One way to reverse this misunderstanding is to start with the man next to you, and in my case that would be the illiterate prison guard convinced that by broadcasting protests in Egypt to the Western world simply makes me a traitor. His more educated disgruntled boss who has prevented me from having a pen and paper in my cell has become more lenient by time when I continuously highlighted certain values of journalism like transparency and the importance of having a watchdog to question the government that pays his salary and evaluates his performance. The metamorphosis has begun and the fact that this letter has been released from prison and published is in itself a victory to be celebrated and hopefully not the last.”

Another Al Jazeera journalist, Arabic correspondent Abdullah Elshamy, has been imprisoned without trial since last August and has now been on hunger strike for weeks and lost nearly 35kg and not received medical attention. [Update: Elshamy was released on 17 June after 10 months in prison without charge or conviction.]

Fahmy described this as a blatant “breach of human rights” and added in his letter:

“I see no better occasion than today to remind the world about the plight of these men and that there are dozens of respected, local Egyptian reporters and citizen journalists who are suffering in prison awaiting trial, they are simply prisoners of conscience.”

(See and hear the letter read out in an Al Jazeera English video) The Egyptian judge at the 3 May bail hearing wished the 3 detained Al Jazeera journalists a happy Press Freedom Day then refused bail with no sense of irony at all. At the hearing Peter Greste said for the benefit of other reporters present: “You can’t have a free society without a free press. In Egypt today you know that you can’t provide balance as long as you can end up in prison like us.”

[Update: Sadly, the 3 reporters – Peter Greste, Mohammed Fahmy and Baher Mohamed, were handed down guilty verdicts on 23 June for 7 years for spreading “false news” and supporting the banned Muslim Brotherhood, charges they continue to deny and say they were only carrying out their duties as journalists and reporters. Nine other defendants tried in absentia, including three foreign journalists, received 10-year sentences, two have been acquitted. Of the twenty defendants in total nearly half are Al-Jazeera journalists. #AJTrial]

[Latest: Fahmy and Mohamed are among 100 prisoners to be released and/or pardoned today as part of Islam’s Eid al-Adha holiday and Egypt’s attempt to re-legitimise its Western standing]

Early 20th century Ukrainian-Russian writer Mikhail Bulgakov – he was born in Kiev, but moved to Moscow – managed to simultaneously both offend and please Joseph Stalin and have books and plays not only banned but also protected by him! He superbly put that a journalist without freedom is like a fish without water:

“To struggle against censorship, whatever its nature, and whatever the power under which it exists, is my duty as a writer, as are calls for freedom of the press. I am a passionate supporter of that freedom, and I consider that if any writer were to imagine that he could prove he didn’t need that freedom, then he would be like a fish affirming in public that it didn’t need water.” – Mikhail Bulgakov, Manuscripts Don’t Burn: Mikhail Bulgakov A Life in Letters and Diaries

If Press freedom is like water for journalists, just as the air all of us breathe, it is not something that can be restricted. The right to free expression and opinion is a universal human right. I’ll end with the infamous non-quote by Voltaire:

“I disapprove of what you say, but I will defend to the death your right to say it.”

This was actually said by his biographer Evelyn Beatrice Hall, The Friends of Voltaire, 1906. What he did say in a 1770 letter, was:

“I detest what you write, but I would give my life to make it possible for you to continue to write.”

Many have given their own lives in order to report the news or their views, whether professional or “citizen journalists”, but Press freedom means supporting the freedom to express even the views we may detest or disapprove of. Press Freedom Day means reminding the powers that be that the “world will be watching” their treatment of journalists and freedom of speech.

This article was first published on Bubblews and subsequently a version was published on my Google blogger/blogspot account.