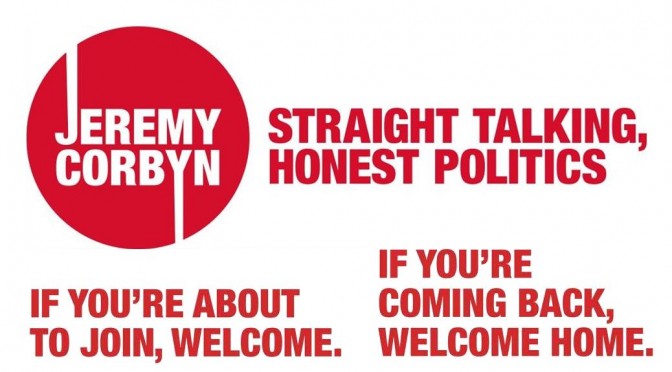 Between you and me, I once voted Tory – 30 years ago, and never yet Labour until Jeremy Corbyn inspired me. The Labour Leadership campaign, until Corbyn’s shoe-in to liven up the deadly proceedings, had initially deadened me to more of the same public school Oxbridge blue Labourites. Corbyn added heart, soul and principles – I don’t have to agree with him entirely, but we need a Tony Benn or Michael Foot for their beliefs and ethics, not just electability or the in-word according to Radio 4, credibility.

In the intervening 30 years I’ve voted LibDem and Green believing in free speech, equality and the environment. I have an Economics degree to my name, and so understand the economy – but it’s not an exact science, it’s more like being a meteorologist or historian with failed predictions and over-analytical hindsight still not faithfully dictating future outcomes.

Corbyn has injected humane passionate inclusive positive politics back into the mix, he’s avoided criticism of the other candidates and made politics appealing to all ages once again. He’s packed out halls up and down the country. He’s apologised on behalf of Labour and welcome new and old members to Labour’s fold. He is, “true Labour not blue Labour“.

Globalisation is here to stay – and that is a good thing. I believe in a true globalisation, a fair trade where second and third world (what classist terminology) countries can export through economies of scale and relatively cheap labour until they rise up the economic rankings like the BRIC nations have but Africa, bar Nigeria and its oil, haven’t.

Capitalism and the not-so-Free Market

Capitalism exists not because of free market forces, but because those with power and economic privilege are able to fix the market. Under a true free market capitalism the banks, Iceland, Greece etc would have been allowed to go bust and would no doubt have been reformed and rebuilt (probably with outside support and freedom to reset currency) like Germany and Japan were post-War.

The EU or the fixed federal currency market, is not a free market, nor is protectionist America.

I no more believe in socialism as a divorced from reality theory than I do conservatism or capitalism, I do however believe in equality, human rights, opportunity and globalisation – as opportunity and undeniable reality. What this means is that my voting intentions lie across the field from Green to Liberal, Labour to Conservative, though given half the chance north of the border I’d probably vote SNP.

I do believe in the re-nationalisation of basic transport, energy, and broadband, or their shared ownership by not-for-profit community interest companies as an alternative to buying them back. The Internet and fast transport are the modern industrial revolution, changes that cannot and should not be rolled back.

I also believe in responsible re-investment whilst interest rates are low and we have AAA rating. In infrastructure, for example, that will enable entrepreneurial expansion – something even Corbyn has voiced, he is not stuck entirely in the 1970s or the 1790s as Boris Johnson has termed it. Housing, transport, green/new-energy and technology need investment. Corbyn has said, as part of his Better Business plan:

“The current government seems to think ‘pro-business’ means giving a green light to corporate tax avoiders and private monopolies. I will stand up for small businesses, independent entrepreneurs, and the growing number of enterprises that want to cooperate and innovate for the public good.”

Vulnerable people need protection – Capitalism does not provide that. There has to be compromise with free market economics to achieve community care, compassion, and ethical responsibility. The focus on prosperity and opportunity ignores the needs of fair provision for all people and those disadvantaged by lack of possibility.

Socialism cannot meet that need without compromises either. I’ve always been a free market relative small-‘c’ capitalist with a socialist heart, green environment and liberal free speecher – that doesn’t mean a compromise candidate, but a strong-valued candidate willing to balance means and objectives, and prioritise people not power, not compromise principles. Labour has gone too far down the compromise route.

The language of “we cannot deliver principles or priorities until we have gained power (by any means)” leads to voter distrust. The politics of the majority may well be those of aspiration but the needs of the many are actually those of desperation and disenfranchisement.

Personally, switching from privilege to privation, through life and mental health circumstances, changed my politics. Politics now lacks principles and heart, Corbyn, Nicola Sturgeon, Natalie Bennett and Leanne Wood bring back something of that. They may yet reinvigorate the electorate.

Andy Burnham appears to be an opportunist, accused of flip-flopping policies for best outcome – remember he’s stood for leader before. Yvette Cooper has political history and association with the Blair-Brown years, and Liz Kendall is way too Blairite – and now cursed by the other Miliband. A cabinet composed of all of them stands a chance but bar Burnham (who seems to be manoeuvring himself to hedge his bets whilst everyone bets on Corbyn 1/4 whilst Burnham is 4/1) the others have stubbornly refused to share a table with Corbyn and Labour luminaries have done everything possible to derail and invalidate the democratic revival the leadership race has brought.

By mass appeal I’m not talking majority aspiration, but appealing to the masses, the people who exist near the bottom bent under the weight of everyone else getting ahead by aspiration and avarice, and leaving them behind. Those forgotten, that even David Cameron cynically swore in 2010 before the election that he would not forget, during austerity. The poor, those on benefits, immigrants, the disabled, those with mental health issues, the forgotten and might as well be ‘disappeared’.

If print media column inches are counted then Jeremy Corbyn is streets ahead,  and if social media is anything to go by then his Facebook campaign has 62,000 supporters (& 78k on his personal page) to Andy Burnham’s under 5,000 (18k on his personal page) Yvette Cooper’s 400 (20k on her personal page) and Liz Kendall’s 115 (7k on her personal page). Among my friends alone, 70 have liked Corbyn’s campaign page, 1 Burnham’s, and another has a declared interest for Kendall. It may be the Facebook generation that he is reaching, but by a long chalk he is the one Labour leadership contender reaching it. A spoof page for Liz Kendall for Tory leader has 3 times as many likes as the one for Labour leader.

Aside from social media, Corbyn is taking towns and cities by storm to packed-out venue crowds and queues down the street if feedback from  Norwich is anything to go by. More than 1500 registered to attend an 800-seat event, so Jeremy stepped outside to address, without notes, those who couldn’t get in. Many chose not to attend once they knew it was over-capacity. this was Norwich’s biggest political rally in decades.  This over-capacity story was repeated in Ealing, Glasgow, Leeds, London, Newcastle and other locations.

“This is a phenomenon, the like of which I haven’t seen in 40 years of watching Labour from close-quarters. Because it’s feeding off an aching for change that’s coming from ordinary Labour supporters below, not being imposed by rulers from above” – Brian Reade in the Mirror

Opposition – A Party of Protest

We could not have a better Leader of the Opposition for the next 5 years, certainly post-Miliband’s silent slide from the scene post his #EdStone and election loss moment, than Corbyn. During the interregnum Labour has been impotent and were the SNP to be a UK-based party one might have seen Nicola Sturgeon as the true heir to opposition leader in Parliament.

The fear that Labour would be consigned to “oppositional politics” or be a “party of protest” were Corbyn to be at the helm, is not a bad thing. The third of the electorate that don’t vote include people disillusioned with politics and politicians who all seem the same, 50 shades of austerity rather than any alternative vision. We have had more Blue Labour post New Labour and at the last election could barely tell the parties apart.

Janet Daley, among others, writes that the Tories are now waking up to the fear that Corbyn may win, after their initial glee at his rise, thinking that Labour had shot itself in the ‘Michael Foot’. Electing someone the Tories fear will create true opposition and debate, not an establishment bi-party centre-right duopoly. We’ve had the political equivalent of price-fixing for too long. The female-led Greens, Plaid Cymru and SNP gave us a taste of political change but could not break the mould other than in Scotland.

When the Right calls a political spade a spade:

“The only way that Labour can win that contest is to become (as they see it) a Tory-lite party: Conservatism with a human face. And that is not, absolutely not, what they are interested in. If, in order to be electable, you must relinquish all your socialist precepts and learn to love the free-market economy, then there is nothing perverse in turning your back on electoral victory.”

And, when Right wing Boris Johnson and Janet Daley are in agreement with Labour’s Dan Hodges, one has to wonder that a politician this scary may actually be quite good.

Standing up for principles over power, may inadvertently deliver power. Focusing on power at any cost, as Blair did – delivered electoral victory and increasing disillusionment among the faithful as they witnessed the rise of Tory Blair.

In fact, the interventions of Tony Blair, Gordon Brown, David Miliband, Alastair Campbell, Peter ‘Machiavelli’ Mandelson, and even Neil Kinnock are all proving counter-productive and appear as attempted establishment saving, rather than actually listening to the disenfranchised, for whom Labour was founded. The new class war is for the voiceless and voteless against the vices of the entrenched political victors (New Labour and New-but-increasingly-old Conservatives).

We could perhaps have a golden age of re-expansion with current cheap, albeit borrowed, money and investment, but it needs to be carefully managed not overspent – I’ve no idea who could deliver that, but I’d rather a realistic way to deliver Jeremy Corbyn’s heart were found than a heartless way to deliver Kendall’s power-hungry realism were.