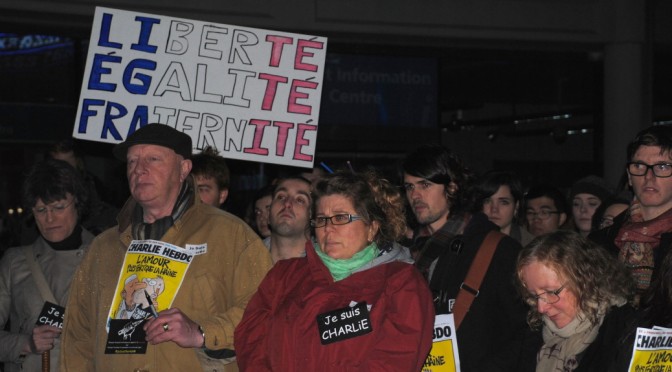 Around 200 people gathered in the rain and cold outside the Norwich Forum to stand with the #JeSuisCharlie victims in a poignant and peaceful vigil marked by respect for all beliefs, but especially of freedom of expression.

This was Norfolk’s small but inclusive contribution after nearly 4 million people assembled in France at the weekend, 1.5m in Paris alone, only tarnished by the presence of leaders and foreign ministers from around the world, many of whom shackle freedom of speech and belief in their home countries.

The Norfolk crowd, with a a few dozen French nationals studying or living here, assembled calmly outside the Forum, candles were lit to spell out “Charlie”, after an introduction by French organiser Clémentine Pellegrino – in which she quoted Albert Camus, there was a minute’s silence during which pens and pencils were raised aloft.

There followed an invitation to those present for anyone to say or share something, some came with prepared words others seemed inspired with spontaneous speeches, each leading on from the last.

People of varying backgrounds, political and religious beliefs, were represented. Several began their speeches in French. A woman from the local Liberal Jewish synagogue asked for raised hands from members of other faiths – Jews, Christians, Buddhists, not that I spotted anyone noticeably Muslim by any stereotypic dress.

When I felt moved to speak, I spoke up for the hundreds of journalists around the world imprisoned or killed for publishing political or religious comment that may not agree with everyone. I mentioned the Al Jazeera journalists locked up in Egypt currently awaiting appeal against their sentence.

I noted how many Arab papers and cartoonists had also drawn cartoons of support but also how the Syrian cartoonist Ali Ferzat had been beaten for criticising and caricaturing President Assad.

I raised the hypocrisy of Saudi Arabia sending condolences and criticisms of the criminality of the terrorist attack whilst locking up and carrying out a sentence of a 1000 lashes upon Raif Badawi for setting up a Liberal political website.

I mentioned the view against polarising this as a clash between civilisations, but instead one of a clash within them. By far the majority of extreme Islamist victims have been Arabs and Africans, Muslims and Christians, not Western writers and commentators satirising religious figures.

I also drew attention to the dozens of Arab and Muslim countries and organisations who did condemn the Parisienne atrocity as “Not in my name” and nothing to do with the tenets of Islam. Because of this I carried not only #JeSuisCharlie placards but the same sign written in Arabic, along with #JeSuisAhmed – the Muslim policeman who died protecting the rights of others to criticise his religion, #JeSuisRaifBadawi; #JeSuisJuif for the Jews in the Kosher store who were also targeted – if anything that *was* a racist attack; #JeSuisMusulman to say I stand with peaceful Muslims, like the Australian #IllRideWithYou hashtag that trended after the Sydney cafe siege.

Whilst I had also made a sign #JeSuisNigerian to remember the 2000 massacred in Baga a few days ago, as if African lives mattered less, I did not remember to mention it, but my omission was more than made up for when the local Police head of diversity, Abraham Eshetu, spoke about what had happened in Nigeria.

There was no racism, or Islamophobia, at the event, no far right hijack as was feared by some, indeed quite the contrary, these were condemned amidst the solidarity against fear and violence, and for freedom of expression, belief, and speech. This was echoed by the organiser’s intent for a peaceful demonstration. It was sad that some did stay away as “Je ne suis pas Charlie”, because this movement of people, galvanised over social media, need not be hijacked by world leaders for their political ends, nor used by racists to rant against immigration, instead it should be an opportunity to stand up for diversity of belief and the rights to express them. It is probably forgotten that Charlie Hebdo also ran cartoons satirising the far right, Marie le Pen, not just the icons of all the major faiths and political leaders of all hues.

Clémentine, originally from Nice and a Norwich resident for two years, was reported in the local EDP newspaper, as saying:

“My French friends and I felt like it would be good for the freedom of speech and to show the outside world that people do not want to surrender to these attacks. There is a chance that the people in France see what we have done and we want to show our support. This is a message of peace, and a chance to show the Muslim community that we support them.”

Despite, therefore, the very non black-and-white world of the #JeSuisCharlie stand for freedom, I was and am willing to be counted among the millions voicing their support, ensuring that all beliefs are free to be expressed, albeit with respect, yet open to criticism and humour. The right to insult, does not mean the need to do so. Challenging power structures and ideologies – religious or political, that oppress rather than attacking individuals or faiths in an ignorant blanket manner, is my preferred approach.