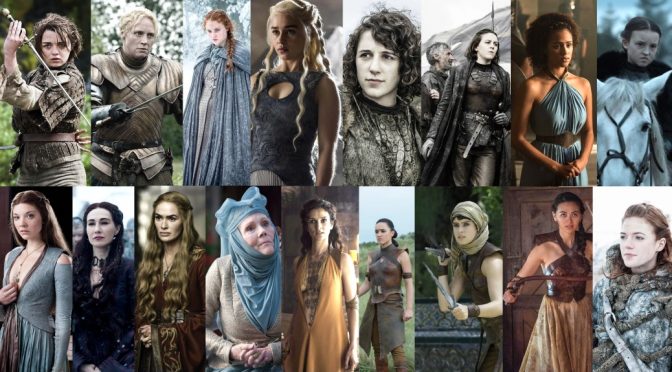 Game of Thrones Season 6 – Women Rule, their Rise and a few Falls

Game of Thrones season 6 watched, check. Hardly respite from Brexit daggers-in-the-back fallout and the decimation of the leadership of the Labour Party and Conservatives. So, no spoilers…but you just know somebody(ies) GoTta die!

What I have loved about this series has been the full-on characters, and willingness to “take them out”, often en masse. The “Red Wedding” episode has gone down in TV history as a lesson in killing the lead characters. Viewers are now stuck in a Nordic noir drama, namely Stockholm Syndrome, addicted to our abuser awaiting George RR Martin’s next, very literal, character assassination.

Whilst some women have fallen, season 6 saw the downfall of more men, often at the direct or indirect hands of women. It’s hardly a confessional secret, but I love strong women, I am a kind of one – despite protestations from Germaine Greer.

And if you think women can’t do objectification, think again. Spend enough time in the company of bisexual and lesbian women, and you will hear just as many “phwoars”, just with less of the “show us your tits”. I call it objective appreciation as opposed to rarely-appreciated sexual objectification. I’ve been in a room full of lesbian feminists, only to witness one-half of the room ogling a Beyoncé and Shakira video and the other half, shaking their heads in shock.

A full 80% of the 420 followers of a Pinterest page on “Steampunk fashion, warrior women, cosplay armour and erotica” are women, just 84 are men.

George RR Martin paints a none-too-pleasant medieval reality for most women, except perhaps those on Dorne. Rape, violence, abuse, no inheritance, impractical dress sense etc. Whilst the books, and even more the HBO series, panders to male and some same-sex fantasies of women in tight leather bodices or much less, he also allows fantasy to break the lace and leather ceiling for some of his powerful women. They can rise to the top and take out the men, as well if not, better than the men fighting their way to the Iron Throne.

“It might appear, looking at Westeros and the medieval past from which so much of its inspiration is drawn, that the ladder is built for men. The wearing of skirts, not to mention the frequent necessity of taking them off, keeps women from competing in the climb…the women of Westeros with noble blood in their veins have choices that aren’t available to those at the bottom of the social pile. Sex sells, and what’s true for HBO’s ratings is true too for Westeros’s women who start with nothing…Unclothed female bodies offer a route up the ladder…History tends to record only the names of those who make it to the top – and what’s true for men is doubly so for women.” – The Guardian (2014, no current season spoilers)

The Art of War

It is the women in Game of Thrones who truly inject the ‘art’ into the art of war. Season 6 sees women have their military advice spurned and yet still save the men’s day. Their socio-political acumen is no more ably demonstrated than Daenerys, the socially reforming yet empire building Queen of Westeros, well just Essos, for now.

Speaking of art, here are some maps of Westeros and Essos, accurate, stylised, tube maps and suggestions that Westeros is a England and Wales, with an upside down Ireland beneath, and Scotland as north of the wall!

The Women of Westeros & Essos Awards

Sansa Stark for stopping being a precious princess and learning to get what she wants not what men want of her.

Lady Lyanna Mormont for being 10 years old and telling the men what to do, and what loyalty and balls mean.

Margaery Tyrell for playing the long game and … [spoiler] getting through a number of men:

“Margaery…used her femininity as a smokescreen to mask her ambition and learnt how to beat the boys at their own game, telling her menfolk exactly what they wanted to hear. She accepted first husband Renly’s homosexuality, massaged second husband Joffrey’s ego, and boosted latest husband Tommen’s shaky confidence.” – Daily Telegraph (2016, contains season 6 spoilers)

The feisty fighting ‘Sand Snake‘ sisters, although their best verbal put down was by Lady Tyrell at the end of season 6 (no spoilers in the clip below).

Diana Rigg, playing Olenna Tyrell, at age 77, puts the younger women in their place with ease and disdain!

Game of Thrones likes its bastards, even having a “Battle of the Bastards” episode this season. The Sand sisters are the eight bastard daughters of Prince Oberyn Martell, several of whom he trained in warrior arts. I’m guessing their mothers trained their trashy tongues! Ellaria Sand was mother to four of them.

What they would do for family, and in Cersei’s case would even ‘do’ family!

Melisandre, the Red Witch/Priestess of the doesn’t-live-up-to-his-name “god of light’, for sacrificing a child, not even redeemed by bringing back John Snow. Winter is coming for her! Season 7 of Game of Thrones will be just seven episodes, it will be both too short and long-awaited.