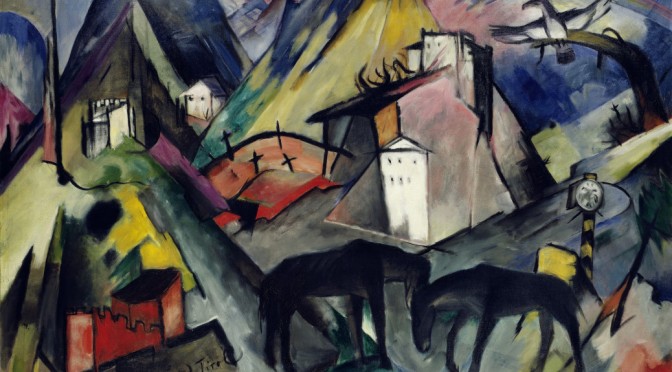 Bavarian artist Franz Marc died 100 years ago on 4 March 1916 at the Battle of Verdun, despite an order to withdraw him as a prominent artist. With his love of horses, he appropriately signed-up as a cavalryman and also developed artist-inspired Pointillist painted camouflage for German artillery.

It was a First World War that he oddly believed in despite his art being proscribed as an entarteter Künstler, or “degenerate artist“, during the Nazi era, a quarter of a century after his death. That led to the removal of some 130 paintings from German museums in the late 1930s, some of which were only rediscovered in 2011 in the Cornelius Gurlitt art horde.

“Serious art has been the work of individual artists whose art has had nothing to do with style because they were not in the least connected with the style or the needs of the masses. Their work arose rather in defiance of their times.” – Franz Marc

Marc painted and drew well over 500 oil paintings, drawings and watercolours, as well as being a woodcut and lithographic printmaker, and whose works now appear on postcards everywhere. Whilst his father Wilhelm Marc was a professional landscape painter he was influenced by studies in Munich and Paris, and inspired by Vincent van Gogh and Expressionism.

He counted Russian-born artist Wassily Kandinsky as a friend and co-founder of the art collective Der Blaue Reiter, 1911-14.

“The Blue Rider” comprised artists formed out of tensions with NKVM, also founded by Kandinsky in 1909, and the rejection of Kandinsky’s “Last Judgement” painting. Although “The Blue Rider” was a 1903 painting by Kandinsky he later suggested the movement’s name was derived from his love of riders and Marc’s enthusiasm for horses, and their shared love of the colour blue. The group folded with the deaths of  Marc and fellow artist August Macke in World War I and the return of Russian-born members to their home country.

Although Kandinsky is often credited with creating the first abstract artwork in 1910, Tate‘s 2013 retrospective and The Serpentine Gallery‘s current exhibition (3 March-15 May) of Swedish artist Hilma af Klint (1862–1944) would suggest otherwise.

She, yes – a female artist for Sweden was ahead of other nations in allowing women to study art and paint alongside men, was producing abstract paintings from 1906. Curator, Iris Müller-Westermann, describes Af Klint as an “outsider”, a “disturbing artist” who could “rewrite art history”.

Hilma Af Klint’s love of animals, plants, and their science, forged a bond between her art and the the natural world, and an evolution from traditional landscape to abstract art. Her non-traditional ‘occult’ spirituality also inspired her work.

“Today we are searching for things in nature that are hidden behind the veil of appearance… We look for and paint this inner, spiritual side of nature.” – Franz Marc

Franz Marc was also engaged by animals and wild colours that reflected inner emotion and spirituality not the natural world as seen on the surface. Thus his trademark blue horses, a red horse, yellow cow or even a purple hare, might be represented, though many of his earlier painted cats bore more naturalistic colours:

Whilst not as obsessed and pursued by colour as perhaps Monet, nonetheless he imbued his use of colour with meaning and metaphor:

“Blue is the male principle, stern and spiritual. Yellow the female principle, gentle, cheerful and sensual. Red is matter, brutal and heavy and always the colour which must be fought and vanquished by the other two.” – Franz Marc

He was looking for the “inner truth of things” and it was a quest that took him back to nature:

“Marc found this nature-oriented quest for spiritual redemption inspiring. His vision of nature was pantheistic; he believed that animals possessed a certain godliness that men had long since lost. “People with their lack of piety, especially men, never touched my true feelings,” he wrote in 1915. “But animals with their virginal sense of life awakened all that was good in me.” By 1907 he devoted himself almost exclusively to the representation of animals in nature.” – Guggenheim

Marc had planned to train as a theologian but instead went into art and married artists, twice. His artistic depictions of the beauty and innocence of animals were painted against a contrasting backdrop of the years leading up to the First World War, a war that cut short his life and art career at just 36 years old.