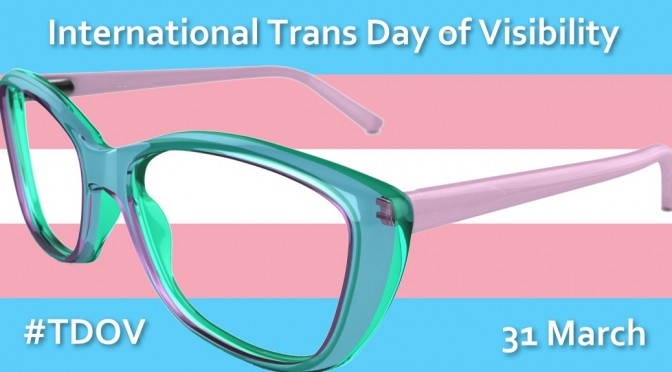 The last day of Women’s History Month, the day before April Fool’s, is the International Trans Day of Visibility (TDOV), 31 March. Since 2009, it has sought to celebrate transgender positivity in contrast to the Transgender Day of Remembrance (TDOR) events around 20 November that draw attention to the high levels of violence and murder that trans people suffer in some countries. Even where murder is less likely, bullying, harassment, and discrimination can be part of the transphobic package that can add to the likelihood of suicide, which some 40% of trans people attempt, and twice that number, consider.

TDOV is an opportunity to portray positive role models, to let the many trans just coming out know that “it gets better“. I’ve spent ten plus years ‘out’ and it’s been a rocky road, with the almost requisite marriage break-up, suicide attempts, looks in the street, and transphobic abuse online. But that need not be everyone’s experience and for many, it is getting easier, with better support and a more accepting society.

Ironically, many trans people don’t want to be visible, they’d rather not be noticed, hopefully passing as fellow human beings in a crowd. Inevitably, some of us stand out more than others, some by choice, some by fate. Don’t always assume a trans person wants to be recognised or feted as one, many would rather be seen as your common or garden variety man or woman. I’m of the louder and more visual variety, who’ll probably die still not conforming to gender stereotypes and expectations.

I’ve found, indeed, that being non-binary is a better fit for me than the discrete categories of man or woman, male or female, boy or girl. I, personally, don’t mind whether anyone sees me as a “real woman” or not, I know basic biology, although mine is more complex and many people exist that makes one think again about binary sex default and gender constructs.

I am, however, also not a “real man”, that too is fine! Perhaps, as one of my godchildren once cheekily remarked to me upon opening the door, saying, “Half-ladies first”, I am a “Shim”, also his delightful invention. Other people should be respected, however they prefer to be addressed.

Whilst 2014 has been regarded as the “Transgender tipping point”, 2016-17 seems to be the year of Non-Binary Genderqueer and Genderfluid. In January, National Geographic ran a “Gender Revolution” special issue, and this March, TIME Magazine ran with “Beyond He or She”.

Half of young people now see gender as a spectrum and identify their own sexuality between gay and straight. Most now know someone who is trans and/or non-binary, and they are broadly accepting, the best it has ever been, teaching older adults the way to be around identity and expression. Whilst traditional feminists regard gender as a construct, it is young women who are most likely to see it as a spectrum, blurring the lines between gender and sex. Some 22% of young women identify as other than 100% female.

Just this week, HSBC announced 10 new non-binary honorifics besides the usual Mr, Mrs, Ms etc,. Metro Bank and RBS NatWest already allowed Mx (as I have) or no title. HSBC customers can now choose from:

A Most Reluctant Transsexual

To be honest, I haven’t had it too hard, people have been accepting, and although gender dysphoric, at times I’ve been euphoric to finally be myself. Even with some trials and tribulations, it has been worth it.

My ten-year journey as Norfolk’s “most reluctant transsexual” – as my psychiatrist once called me, has recently closed one chapter and turned the page to another. After nearly 6 years on hormones my resistance towards surgery shattered and I went ahead with a version of GRS that suited my identity and needs. It has made me a happier, healthier person, with no regrets. Rather surprisingly, to myself at least, it has improved my other mental health condition, bipolar, for now at least, with just pockets of extreme downs, rarer hypomanic highs, and many more days of productivity and calm.

In going ahead with surgery I found my mind changed as much as my body. It really was life-changing, even saving, surgery. Whilst I had near constant doubts leading up to it, I’ve had none since that no-going-back day of 6 February 2016, and felt as much lighter between the ears as between the legs. I feel like a psycho-emotional brain tumour has been removed, I have more space in my head, in my thoughts and feelings, no longer obsessed and disturbed by gender identity. I feel no more female, just less encumbered and more myself. Oddly, I feel just as non-binary, non-conformist as ever, and, if anything, less gendered, though more comfortable in my body.

I am but one of millions of trans people worldwide, more than a million in the USA alone, perhaps 300-600,000 in the UK or more. The NHS used to say that there were around 1-in-30,000 people born male (AMAB) transitioning to female (MTF) and 1-in-100,000 people born female (AFAB) transitioning to male (FTM). Those serious underestimates are reflected in the huge waiting lists of 1000s of people to access the handful of UK Gender Identity Clinics (GICs).

Given that the incidence of trans people seeking NHS help is now around 7,000 new referrals p.a., figures over an adult working lifetime would suggest a prevalence of 300,000-600,000 adults, around 0.5%-1% of the population, 1-in-200 or 1-in-100 people, perhaps more. In addition, For every trans person not seeking HRT or surgery there are four or five feeling and presenting as gender questioning or non-conforming. Recent surveys suggest 2.5% may identify as non-binary, 1.75% may be born intersex, and 2% may identify as trans or genderfluid. Overlap between these populations may suggest around 5% total, 1-in-20 people. This isn’t to conflate intersex with trans, just that some can be both, and it shows the degree of sex and/or gender atypicality in the population as a whole.

In the UK we have many visible trans already such as the comedian, actor and now marathon-addict, Eddie Izzard. Other trans comedians include Bethany Black and Andrew O’Neill. Then there’s the arts writer and ceramicist, Turner Prize winning artist, Grayson Perry. In the world of journalism, there’s LGBT Pink List-topping radio and print journalist Paris Lees, along with several contributors to the Guardian newspaper such as Jane Fae, Juliet Jacques, and Roz Kaveney. In the field of law and diversity, Professor of Equalities Law at Manchester – Stephen Whittle, Christine Burns, formerly of Press for Change, Rachel Reese of the University of Law, law partner Clare Fielding, and barrister, Caroline Harrison, QC.

In sport, there’s recently-out boxing promoter, Kellie Maloney, and MMA fighter Roxeanne/Alex Reid. In business, there is Kate Craig-Wood, an entrepreneur and founder of one of the UK’s largest IT groups. Musicians like CN Lester, Thomas Dolby’s son Harper, and a magician, Fay Presto. In politics, there are several trans people who have stood as councillors or for election, across the political spectrum. On television, there are actors and a spate of reality TV stars. Among people who came out in the 1960s and 70s, there’s models April Ashley and Caroline Cossey, and writer, Jan Morris –  all well known British women with open transgender histories. I could go on as I know of hundreds of trans lawyers, doctors, activists in public life, here in the UK alone.

In the USA, Janet Mock, among others have blazed the way by being out and public in their defence of being themselves, creating a tipping point of trans visibility, perhaps leading to the timing of former Olympian Caitlyn Jenner’s coming out.

Also, recently, we’ve seen big names like Lana and Lilly Wachowski of the Matrix films, Chelsea Manning of Wikileaks fame, Cher’s son Chaz Bono, and Laura Jane Grace of Against Me. Actors like Alexis Arquette, Candis Cayne (“Dirty Sexy Money”), Laverne Cox (“Orange is the New Black”) and Calpernia Addams. Nor are “Gender Outlaw” author Kate Bornstein or Jennifer Boylan to be forgotten. Dr Marci Bowers, is an American gynaecologist and surgeon and actually carries out gender/sex-reassignment surgery. There’s the US biologist and author of “Evolution’s Rainbow” Joan Roughgarden.

The names above are just a sprinkling of the probably tens of millions of trans and gender-variant people million worldwide.

For more information about the transgender spectrum visit www.genderagenda.net.