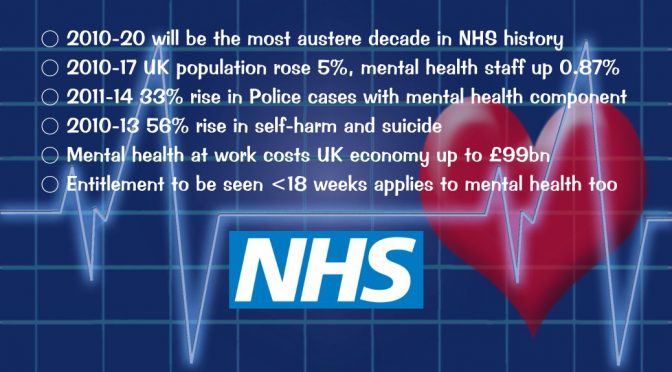 This month saw World Mental Health Day. For the other 364 days of the year, we are forgotten. Austerity Britain has affected mental health services more than most. Despite promises to ringfence the NHS and bring parity between physical and mental health, this has not happened. Instead, beds have been cut, jobs have not kept pace with population growth, and my own trust, NSFT, has been placed back into special measures again, after being the first mental health trust in the country to be sanctioned in this way by the Care Quality Commission (CQC) in February 2015.

Mental health awareness and NHS service provision improvements are sorely needed as referrals have risen 20% in Norfolk and Suffolk, but staffing and beds have been cut. Complaints, locally, have risen from 430 to 592, 2013-16. The latest CQC report criticised inadequate staff and bed levels but praised staff the caring attitudes of staff as ‘good’.

The recent Stevenson/Farmer ‘Thriving at Work’ report has demonstrated the need to promote mental health at work due to its annual near £99bn cost to the UK economy.

A week ago, BBC Radio Norfolk ran a mental health week focus with Stephen Bumfrey featuring it each afternoon, and coming together with Nick Conrad, Sue Tebble and myself, on Friday 20th, for an hour-long special. (iPlayer episode – 2hr 32m in)

On Radio Norfolk’s Matthew Gudgin programme, the BBC’s Bob Carter challenged Theresa May to apologise to the people of Norfolk and Suffolk for having the worst mental health trust in England. Listen to the interview below:

During a recent visit to Archant, home of the EDP, in Norwich, the Prime Minister said:

This makes the failure to resolve the local NSFT crisis all the poorer. Patients, or the politically correct – ‘service users’, have complimented the staff but criticised the system, waits, and other failures. Patient deaths and out of hospital suicides have increased whilst beds and budgets have been cut. Hundreds of patients were sent out of county owing to the lack of beds, up to 225 miles away!

Jeremy Hunt, the Health Secretary, has boasted that provision for mental health has “got better” and that he has increased staffing by 30,000 posts. The reality of the lie, and statistics do indeed damn him, is that 4,100 mental health nurses, 4,596 mental health trust beds, have been cut, and just 692 extra staff employed  – an increase of just 0.87% over seven years, despite population growth of 5% during that time – so, in other words, a cut!

Norfolk has a pioneering mental health within Police HQ service, but nationally, there has been a 33% increase in cases with a mental health component 2011-14. As much as 40% of Police time is spent dealing with mental health-related issues.

Eighteen Weeks, as if!

Under the NHS constitutional pledge, patients have a right to be treated within 18 weeks of referral, including mental health.

“the new waiting time standards will be as follows: 75% of people referred for talking therapies for treatment of common mental health problems like depression and anxiety will start their treatment within 6 weeks and 95% will start within 18 weeks.” Pledge of 2014 to be delivered by April 2016.

Yet, the wait for some treatments can be more like 18 months. Just try requesting something more complex than CBT or other less time-limited ‘quick-fix’ therapies. IAPT referrals seen within 6 weeks were apparently 93-96% in Norfolk and Suffolk.

My personal experience, and that of several friends, has been of much longer waits. Calling the acute care line at weekends can result in complete ignorance or lack of access to your medical records. Support lines have historically been cut. People fall between the cracks, and I know too many people no longer with us due to mental health funding and systemic failures.

Discharge centred mental health, is solution based, with as much an an economic imperative as a wellbeing focus.

Mental health in Norfolk has a Recovery College, a course-based approach to improving wellbeing. I prefer to see it as a discovery-centric way of improving self-management with community support. Some mental health issues do not just resolve, yet the NHS insists on “developing a recovery culture” (p13) in mental health which fails those with long term or lifetime conditions.

74% of NSFT patients represented with mental illness symptoms within 6 months, compared to a national figure of 63% (2015 data).

IAPT (Improving Access to Psychological Therapies) approaches such as CBT serve best those with mild to moderate conditions, whereas moderate to severe need additional and more specialised help, as e.g., with OCD.

Between 2010-13, there was a 56% rise in self-harm and suicide across 52 NHS mental health trusts. It has been suggested that the over-capacity of up to 138% and staffing cuts has increased the risk of incidents.

I find the language, even if it has a clinical meaning, and the reality of response to people at risk of suicide, horrifying. The provision of “low level psychiatric support” was referenced in a Norfolk and Suffolk response it its higher than average suicide rate:

“There is a gap between the Wellbeing Service, the counsellors employed by GP practices and what is on offer via the mainstream mental health services. Suicide rate in Norfolk & Suffolk is high. GP referrals to MH are only accepted 20% of the time. GPs are left to manage risk the rest of the time.” – NSFT, pp11-12

The apparent aim is a “reduction in referrals to mainstream mental
health services by offering more low level psychiatric support in primary care.”

What worries me, is the low level of funding, of staff, of beds, and the cure rather than care attitude of the system. In contrast, the caring attitude of the staff is to be praised, and they need additional in-work support themselves to be able to deliver services under such tight austerity conditions.