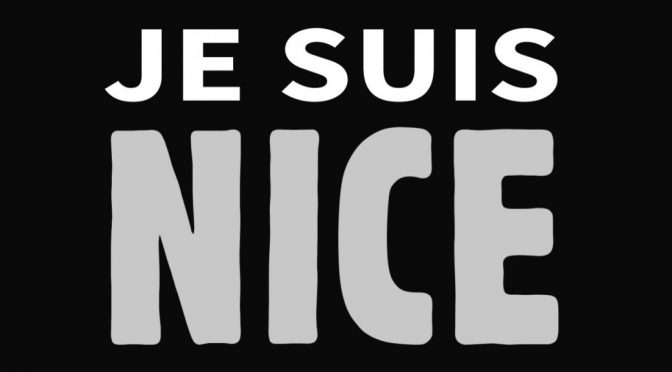 During Bastille Day celebrations in Nice, a French-Tunisian has used a 19-tonne lorry to mow down revellers and civilians, and to shoot at police before he was killed himself. This is France’s second large-scale terror atrocity in 8 months since Paris’ Bataclan and third since Charlie Hebdo. Whilst Liberté, égalité, fraternité (ou la mort) was the cry of the French Revolution and last night’s revelries, life and liberty have been taken from many, including 10 children, due to someone’s lack of belief in equality and fraternity.

It is time to assert our common humanity and not ideological differences, although the exact motivation and any affiliation of the heinous act are not yet known. Neighbours described Mohamed Lahouaiej-Bouhlel as a divorced loner who was not evidently religious, nor had any known terrorist leanings according to security services. Yet, people are jumping to condemn Islam, Muslims, immigration, rather than the possibilty of his being a ‘lone wolf’ attacker or disturbed individual.

“We are facing a war that terrorism has started against us. The objective of the terrorists is to instil fear and panic…Times have changed and we should learn to live with terrorism. We have to show solidarity and collective calm. France has been hit in its soul on 14 July, our national day. They wanted to attack the unity of the French nation. The only dignified response is that France will remain loyal to the spirit of 14 July and its values.” – Manuel Valls

President of the Nice region, Christian Estrosi, has held a press conference, in which he said:

“This is the worst catastrophe our region has seen in modern history. We now have to mobilise all of our services, all the psychologists, volunteers who are trained to help fellow human beings. We will work with the imams, priests and rabbis who will also join us to help the victims and families who are suffering and will probably never heal their wounds … I want to thank people who welcomed passersby and those people who show us tonight that hopefully, solidarity still exists in a world that is too egoistical and individualistic.” – Christian Estrosi

Jump to my personal response.

Kneejerk responses have followed, with not a little emphasis on the ‘jerk’, coming from Donald Trump, “declaring war on terrorism” – we are here in part due to Bush’s “war on terror” and the criminal targeting and bombing of countries not individuals and ideologies. Trump also called for “extreme vetting”, a ban on immigration from terrorist countries and when challenged about home-grown terrorism, such as Orlando, said that “second generation” immigrants were “very bad” too.

Front National‘s leader, Marine Le Pen, speaking to Le Figaro called for “the closure of salafist mosques” amongst other right wing responses including this: “The war against the scourge of Islamic fundamentalism has not started, it is urgent now to declare”, all that before any evidence it was extremist Islamist.

Meanwhile, President’s Hollande’s threat to scale-up French intervention in Syria and Iraq, is incendiary and not helpful.

Germany and Italy have ordered tighter border controls with France.

Theresa May said a similar attack in the UK was “highly likely” and called for new police powers. She said that “The United Kingdom stands shoulder to shoulder with France”, well shoulder to shoulder in the future from outside the European Union. What a time to be leaving. The European Arrest Warrant applies to all 28 EU nations plus Norway and Switzerland, but obviously not Canada – the Single European Market model that David Davis, Brexit Minister, is in favour of adopting.

Jeremy Corbyn, on behalf of the Labour Party said this:

“Those killed yesterday will doubtless have been of different religions, ethnicities and nationalities. It was an attack on us all, attempting to set people against each other. That is why instead, we stand together, now and always, in defense of tolerance, peace and justice.” – Jeremy Corbyn

Jump to my personal response.

Social Media was using numerous hashtags to stay up to date with the attack and offer support: #NiceAttack, ‪#‎JeSuisNice,‬ ‪#‎PrayForNice,‬ ‪#‎PortesOuvertesNice‬.

I have to admit to having a problem with #PrayForNice. Prayer doesn’t stop hate, indeed some prayers – Jewish, Christian and Muslim, incentivise it. Loving action stops hate. Loving acceptance, prevents it breeding in the first place.

Torn between “Tour de Farce” and Tory reshuffle headlines the newspapers couldn’t pull their first editions quick enough. Headline writers were regretting their already gone-to-print titles that ran with Brexit bloodbath or Cabinet massacre, etc. Political careers cut short, would seem so facile by the second editions which carried details of the actual bloodbath and massacre in ‪#Nice‬.

Sports pages ran with “Tour de Farce” and described Froome being “forced to run as crowds cause Tour farce” meanwhile in Nice crowds were running for their lives from a lorry and its driver intent on running or gunning them down.

“We left just before the truck came and then I looked out of the window and saw a river of people running and crying. It looked like the apocalypse but I didn’t know what was going on.” – Leila Pasini

The Daily Mirror initially had a Coronation Street storyline about the death of Kylie Platt on the street’s cobbles – rather too close to people lying dead on the streets of Nice. Beneath that, it had Jeremy Hunt boasting about rumours of his (political) death being greatly exaggerated.

My own reflections on Nice went through a distant relative grief process, as I feel a European more than a Brit and spoke at a Charlie Hebdo memorial in January last year. After the sadness and anger,  needed catharsis – and for that I turned to writing and the shipping forecast!

My first response was to keep up with the news barrage, mainly over social media and the Guardian live updates which trumped the BBC for immediacy. Sucked in like a Stockholm Syndrome victim it became hard to pull away from the uncertainty of whether it was over or was it only the beginning of multiple attacks. After several hours and the final midnight news broadcast, I ended up listening to BBC Radio 4’s “Sailing By” and the Shipping Forecast for their mundane reassurance that the world hadn’t gone mad, or had it? At least with the weather, a storm blows out, a flood abates, but the escalation of extremist terror seems to just keep coming like an undead zombie horde amidst a Game of Thrones winter.

Blame brought no resolution, nor is revolution and fresh invasion of the axes of evil. Evolution, on the other hand, is. Not a survival of the fittest, the ones with the biggest guns, cruelest views, etc, but an evolution of recognition of our common humanity, fellow human rights, freedoms to coexist, communicate, collaborate, learn from and love each other, irrespective of creed, colour, gender or sexuality.

A month ago, I spoke at an Orlando vigil and quoted MLK whose words remain as true as ever:

Pulp‘s Jarvis Cocker chose “Sailing By” as one of his Desert Island Discs, saying for many years that he’d used it “as an aid to restful sleep”

After the sadness and the solace came the guilt that I couldn’t pull away from other people’s pain, that what was real and terrifying for them was a distance news addiction for me. That each individual loss or injury was just a journalistic bean counter increasing and updating as the night dragged on. I had also begun writing and reflecting upon Baghdad’s worst ever post-war atrocity and not been able to post it or a #JeSuisBaghdad update as I’d done before because I was embedded in the outcome of the EU Referendum and pro-EU and anti-hate rallies ever since.

How do I go outside tomorrow and look at the sky, the birds, a flower, and regain my faith in humanity, in human nature? I don’t believe in a biblical Fall anymore, but are we not fallen, flawed?

Fortunately, my faith in humankind is renewed by acts of love and community, as when people rallied round the arson-attacked Eastern European shop on Magdalen St in Norwich, when 200 lovebombed the store, when 400 showed up to support Norwich migrant communities this week, when 2000 peacefully countered and overwhelmed an EDL demonstration in 2012 here.

Like as morning follows night, so my hope will rise anew with the dawn, well perhaps a little later, around coffee time…

What is happening in Nice happens nearly every day in Iraq, frequently in Syria, increasingly often in Turkey, and worryingly 3 times in 18 months in France.