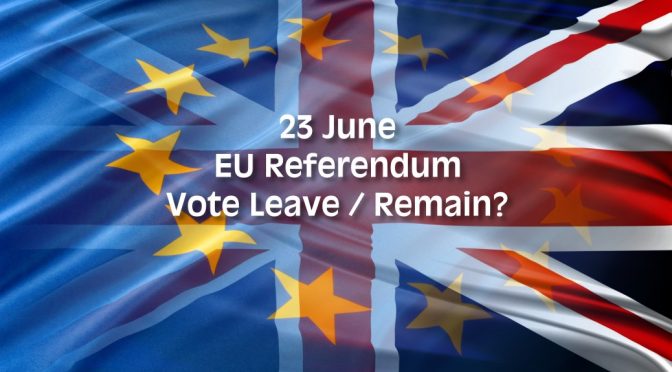 The BBC is attempting to navigate an independent stance on fact-checking the statements by the ‘Brexit‘ Vote Leave and the Remain campaigns in the EU referendum June 23 Vote. This leaves most of my practical work on economics and statistics (my undergrad background) redundant and instead makes me ponder what are the emotional, personal and psychological reasons why people are in such entrenched positions, when, to me at least, the balance of economic and equality facts favour Remain.

Labour say they cannot understand why any worker would not want to Remain for enhanced workers rights. LGBT groups say something similar regarding LGBTI equalities. Yet I know left and right wing LGBT people who have vehemently opposed opinions on this. The vote will be decided on the waverers as neither campaign reaches 50% without the 10-20% undecideds, mostly women, so please research and reflect before voting. This is more important than any 5-year election, this is a 50-year, once in a lifetime decision. Don’t stay at home on June 23.

Economic Facts and that £350m a week

Both sides have accused the other of false figures, but the use of the £350m/week claim which arrived via Leave leaflet through my door again this morning leaves most to be challenged. Admittedly, in their small print they acknowledge we get some back, but they say “less than half”, the IFS and others disagree, arguing it is considerably more than half, as do BBC and Channel 4 Fact Checks.

The reality is that we pay less than £85m/week not £55m/day after rebates and other incomings. This is still a net donation to the EU, but why shouldn’t we, as the economically healthiest nation emerging from austerity, help our neighbours?  That is a global obligation in this modern world, on a broader stage than our own isle, every socialist would surely agree with a redistribution of wealth to poorer nations?

Freedom of travel across Europe, a last-resort court for human, worker and equality rights issues, reciprocal health treatment, ease of settlement and benefits receipt should we retire or relocate in the EU as 1.4m-2.2m Brits have done. Inward investment, education, and scientific research might all suffer from our withdrawal.

Environmentalists argue that the EU has brought us reduced pollution and pesticide use, as well as species and habitat protection.

Whilst, not a direct comparison, non-EU Norway contributes a gross £135/person to the EU for its access to EU markets via the European Economic Area (EEA).

Aside from the Norwegian model of EEA membership and EU budget contributions – actually more than the UK’s there is the Swiss option. Switzerland is a member of the European Free Trade Association (EFTA) but has to negotiate numerous bilateral agreements and has still ended up having to agree to freedom of movement, one of the biggest Brexit issues.

“A senior Swiss official said last month that Switzerland can expect no progress in talks with the EU over migrant caps until after Britain’s referendum on EU membership in June.”

In other words, the Swiss model already costs Switzerland and they are hoping a Brexit would empower them to renegotiate a better deal on migrant numbers.

Whilst EU rules and red tape are the most-cited complaints about the EU, nonetheless, a majority of SME businesses (67-78%) said the EU was a net benefit and they would vote to remain. Access to a half-billion person world’s biggest single market far outweighs any 0.4% GDP cost. Open Europe describes an admittedly worst-case “Brexit” scenario with the UK economy losing 2.2% GDP by 2030 and only gaining 1.6% if we deregulated radically and achieved better terms by far than either Norway or Switzerland. Indeed, we buy far more from the EU than we export, but that balance of trade would likely worsen with Brexit, and to keep the status quo would cost us an EU budget contribution and probably sign-up to freedom of labour movement.

“The EU is…far and away our biggest trading partner, amounting to well over half of our world exports. Indeed, we export more to Holland alone than to the entirety of the Commonwealth.”

Around half of our exports go to EU countries (44-50%), tariff-free, with trade laws that we help to draw up and at least have a say on. Even if we left, to export to the EU British products would still have to comply with EU health & safety standards.

British dairy exports might attract the 55-200% tariffs on imports to the EU. British farmers stand to lose £2.7 billion in EU subsidies.

We may berate the EU courts and laws, but they have been a significant factor in tightening workers rights and hours, consumer protection, and especially for protected characteristic groups, champions of equality legislation. Many rights for LGBTI persons have emerged from or been challenged but upheld by European courts.

In an interview with the Daily Telegraph, Sir Ian McKellen says:

“Now is the time to be backing Europe and giving back that sense of empowerment to countries in the European Union that are still very backward in this regard. If I were to look at ‘in’ or ‘out’ from that point of view, there’s only one point, which is to stay. If you’re a gay person, you’re an internationalist. I don’t want us to retract.”

For trans people, it is even more the case, that EU laws and courts have granted improved rights and equalised protections, even if there is some way to go still, especially for intersex persons.

Since 1999 same-sex discrimination has been banned in Europe and any joining nations like Turkey would have to abide by them, the EU can raise the rights of people in nations with poorer human rights records. Same-sex sexual activity is legal in all EU states and discrimination in employment has been banned since 2000. European Court of Justice case law has often come down against the UK Gov in the past in favour of trans people’s rights since it interprets discrimination on the basis of ‘sex’ as also extending to ‘gender reassignment’. Thus, all EU sex discrimination law applies to transgender people. In 2002, the 1976 equal treatment directive was revised to include discrimination based on gender identity. Whilst not all nations have same-sex marriage yet, EU directives mean that a same-sex marriage agreed in one EU country must be respected in all others.

Nonetheless, whilst 63% of Pink News readers would vote Remain, a surprising 37% would not. Even Boris Johnson has tried to ride the pink bus for Brexit and an ‘Out and Proud‘ group has formed to favour Leave. Admittedly, countries like the Netherlands, Spain and the UK have been ahead of the EU game on many LGBT rights, but the EU has encouraged other nations to follow the trend for greater LGBT equality.

Reasons to Leave the EU?

The three issues of security, sovereignty, and immigration, are the most oft-cited Leave issues. In addition, there is the fear-competition factor of EU access to British jobs.

Immigration regularly raises its ugly head during elections and its control is considered the holy grail of pandering to electorate fears. The ONS says there are 942,000 eastern European working in the UK, along with 791,000 western Europeans. A combined figure roughly equivalent to the number of Brits living in Europe. A fair trade? A further 2.93m workers originate from outside the EU with China and India being the biggest source of foreign workers in the UK. In other words we have a bigger issue with the numbers we can control than the ones we can’t. It has also been suggested for years that over 3 million British jobs may depend upon EU membership and trade.

Furthermore, there is a demographic timebomb approaching, in that, even with high net migration of up to 300,000 people a year, a small city’s worth, in a decade with an aging population we would need them to fulfil available jobs. We have one of the lowest unemployment rates across Europe at around 5% compared to an EU average of 9.6%, only Czech Republic and Germany are lower and yet the latter has taken in huge numbers of migrants. A strong economy can absorb and afford migants, if not actually requires them. In addition, migrants tend to do the jobs Brits don’t want to. Long-houred agricultural, care or service sector, restaurant potwashing, jobs are invariably filled by foreign-born workers not British ‘shirkers’. Admittedly, a derogatory phrase but even in-work Brits are less productive than many foreign counterparts. France and Germany are 30% more productive per person-hour worked.

It is disingenuous to argue that the EU prevents us deporting foreign criminals. In only a handful of cases do EU courts block deportation on human rights grounds. One gain from membership is participation in the European Arrest Warrant which assists the bringing to justice of criminals across the EU. In addition, seeking to deport released foreign prisoners on the argument that they remain dangerous, suggests their sentences were too lenient in the first place, and prison reform and probation are the area of failure. Also, justice means that after a served-sentence, a prisoner is considered to have done the crime, done the time, and should be given a second chance, albeit with probation monitoring and social assistance at reintegration into society.

Iain Duncan Smith says our “open border” from staying in the EU is leaving the “door open” to terrorist attacks. Yet, recent attacks in France have meant a redoubled effort to share intelligence and prevent attacks. Security is illusory, as terrorism by its nature, usually circumvents most checks, although the British Government has already prevented and prosecuted many such attacks, all the while being in the EU. Many leading military figures say that the EU is an “increasingly important pillar of our security”.

As to preserving our UK borders and sovereignty, leaving the EU is almost certain to trigger a second Scottish referendum at which they would most likely leave the UK and commence negotiations to join the EU. Sovereignty is a false-idol and catch-22 if it leads to the break of the UK and creation of a future border with Scotland. In Ireland the border with Northern Ireland would have to close again.

Whilst we might regain control over fishing rights around our shorelines and for miles beyond, we don’t have sufficient a fishing industry any more to exploit that gain, or vessels to police incursion by other EU fishing boats.

Brexit is a big unknown, better the devil you know – and can influence and negotiate with, than an outside-EU limbo of uncertainty.

“The most likely outcome would be that Britain would find itself as a scratchy outsider with somewhat limited access to the single market, almost no influence and few friends. And one certainty: that having once departed, it would be all but impossible to get back in again.” – The Economist

Voting matters, your vote counts, but read between the campaign soundbites, slanging matches, economic promises and fears. Instead, think about the bigger picture, future development and not just apparent personal gain, which may include so much more loss, if we were to vote leave.