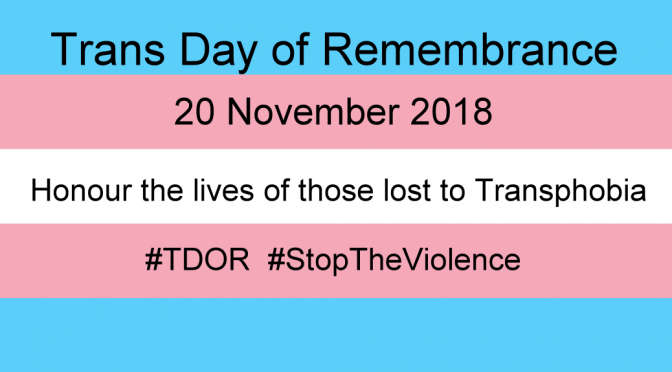 Every 24 hours a trans person is murdered, 369 this year, nearly 3,000 the last 10 years – that we know about, i.e., it may only be the tip of the iceberg. It is a number that is rising annually and particularly affects those in the Americas but also in over 70 other countries around the world.

Since 1999, the Transgender Day of Remembrance (TDoR) has taken place every November, now following the newer Trans Awareness Week. It is the day when we recall and respect those trans and gender-diverse people who have been victims of murder or manslaughter. It does not include the countless numbers that take their own lives through suicide. Trans women of colour are the most likely to be killed of all transgender people, especially, but far from exclusively, those involved in sex work. Also, everyone from hairdressers to artists and activists, and many who were migrants.

Just this week, 40 trans activists at a rally in Kiev, Ukraine, were attacked by far-Right radicals throwing smoke bombs and punches.

Read more about the numbers, the lives, around the world, ended through transphobia and transmisogyny, issues in the media and feminism, and TDOR commemorations on 20 November 2018.

As part of @KLWNpride‘s #TransDayofRemembrance event tonight, we rendered up the https://t.co/itXXIxffyE list of people lost to anti-transgender violence into a “credits roll”. Happy for others to make use of it. Fifteen mins long! 😢 https://t.co/pHPJgDfSd6

The person picked up in the media for being trans and a victim of violent crime in England and hence the only UK trans person this year to be added to the long list of transgender people killed was Naomi Hersi. Sadly, she typifies the fairly common context for many. She was a trans woman of colour, and a victim of violence during or after a sexual encounter. Ironically, she last tweeted 3-years before her death about trans women of colour facing an epidemic of violence and murder.

Trans Women of Color Face an Epidemic of Violence and Murder http://t.co/S7ZkgqXX6J via @vicecanada

Sadly, around the world, trans people are often in the news for the shocking recurrence of their frequent murders. Not in the news are the statistics that trans women can be even more prone than cis women to sexual violence and abuse, as many as 1-in-2.

That flies in the face of the alternate narrative put out by those fearing Trans rights and suggesting that trans women are rapists and murderers in drag, abusing gender self-ID (which in the UK we haven’t even got yet). The statistics of male-born sexual assault perpetrators in prison who may now be transitioning actually shows that gender self-ID isn’t the problem, but abusers are. The majority never dressed as women in order to abuse.

Transgender people are in the news or online media nearly every day. Frequently, there are several trans-questioning or outright transphobic articles in The Times every 7-10 days, not to mention other papers such as the Daily Mail, (I counted 7 in a 4-day period during late October in the DM alone) and continuous TV and Radio programmes to boot.

Last year, Ruth Hunt, CEO of Stonewall described Britain today as “at an absolute crisis point in how it treats trans people”, in no small part down to media attention.

Instead of the prurient public interest being in trans ‘sex changes’, former lives, and scaremongering fears of ‘sex pest perverts’ in toilets or prison (where they should be), the media should be concerned about the levels of abuse, bullying, murder and suicide that so blight trans lives.

The escalation to a “hostile environment” due to the ‘debate’ around an updated Gender Recognition Act (GRA) between some feminists (colloquially known as TERFs by trans people, but not a term owned by the so-monikered trans or gender critical radical feminists) and transgender people – mostly but not exclusively directed at trans women, has led to a toxic atmosphere.

Last year, Ed Miliband “hit out at the inaccurate coverage in the press, accusing newspapers of propagating a “moral panic” similar to the anti-gay coverage seen in the 1980s.” – PodCast

Trans people’s lives are already under a microscope as part of their transition pathway, but to be so in the media spotlight too puts their private and social lives up for involuntary discussion and invasive dissection.

Lucy Meadows took her own life in 2013 in strong part due to “the toll the press was taking on her mental health”, says her former partner. “The media later claimed, [that] by putting out an “official” letter, the school [where she taught] had “officially” placed Lucy’s transition in the domain of public interest.”

More positive has been the campaigns of Stonewall, Comic Relief, various public bodies, and open-minded news outlets using the opportunity of #TransgenderAwarenessWeek to balance the negativity online. ITV Anglia broadcast a piece on transgender workplace discrimination and homelessness that can affect 1-in-4 trans people.

Two years ago, saw 295 trans and gender-diverse persons added to the list of those killed for being trans. Last year that number was 325, up 10%. This year it went up 13% to 369. Improved news monitoring could account for it but hate and visibility are also on the rise.

You are 17x more at risk in the US than in India but 8x more at risk in Pakistan than India. Hate crimes against trans people in America were up 44% in 2016, according to FBI data. Donald Trump has recently tried to define sex in such a way that would make gender transition a legal non-entity.

In many countries, trans and gender non-conforming people live riskier lives, not by choice, but usually as a last resort due to the oppression, rejection and lack of rights within their cultures and societies. Many struggle to find work to survive, let alone to transition, and resort to sex work and/or flee their countries as migrants. Either or both of these paths putting them into the line of fire of greater exploitation and risk.

These numbers do not include suicides, the countless thousands who take their own lives – around 40% try, twice as many consider it. Sometimes it is the result of an attack:

These numbers are people. [Some of the names…]

These numbers are too many.

These numbers barely scratch the surface of the actual violence trans people experience, as much goes unrecorded, or are cause/status unknown.

Many countries don’t mention trans status in reports of violent death or in their internal statistics – particularly in anti-LGBT regimes and regions. Again, many may be killed in their acquired gender but the death not be because of it, or their pre-transition life simply not known about.

In addition to violent deaths, 1-in-2 trans people experience domestic abuse and/or sexual violence (DASV). Trans men and women alike often suffer in silence and fear that shelters and services won’t be there for them.

81% of trans people have suffered physical and/or verbal abuse.

Are they not women if people and society perceive them as such and treat them equally badly?

Yes, their social and biological experience when growing up is not that of natal/cis women but many in medicine now recognise a biological rather than purely psychological basis for the origins of gender dysphoria.

How then can some in society – conservative religions, some feminists, right-wing journalists, far-right radicals think that being trans male or female is something we need to fight against?

The personal is political and it’s hard to avoid the political, for murder is as personal as it gets. The irony that this was a rallying cry of late 1960s/70s Second Wave Feminism and yet is also the lived and embodied risk of being trans is not lost on me. Women regularly experience sexism and discrimination because of their sex. Black women even more so, adding racism to the crimes against their person.

The conflation of sex with gender and/or sexuality is an issue needing improved education to better understand people’s authentic ‘born this way’ identities.

Don’t scapegoat us as perverts and rapists. Don’t harm us and kill us. Instead, be allies, support us to be ourselves, and let’s bring these murder, abuse, and suicide rates down in future years!

“It could have been me…”

TDOR remembrance meetups are held around the UK including London, Liverpool, Brighton, and Norwich, as well as worldwide including Paris and New York and dozens of other locations.

Norfolk, my adopted home county is holding at least three TDOR events, one at the UEA – last year’s was attended by over 80 people (Concrete Online report), another at St John’s Timberhill, and a further

“Our Service for Transgender Day of Remembrance is a way of showing our commitment as people of faith; of declaring that the lives and the rights of transgender people matter to us all and ultimately to our community and our society if prejudice and intolerance are to be banished in the name of equality, diversity, justice and peace.” – Fr Christopher Wood, Rector of St John’s Timberhill Church, Norwich

“These statistics are horrific and we all need to do more to support transgender people and ensure they can be safe and proud to be themselves.” – Michelle Savage, Norwich Pride