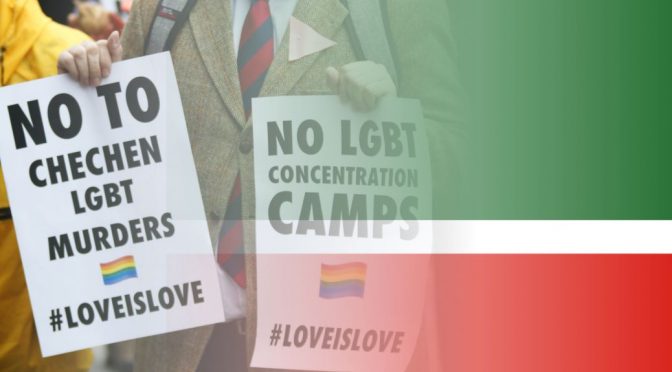 The Chechen Republic is a Russian autonomous region that is around 95% Muslim. Reports over the last week or so have continued to come in that around 100 men suspected of homosexuality have been sent to a detention facility in Argun, and that allegedly 3 have been killed. Calling them ‘concentration camps‘ may be a reach, but as we don’t know what is going on there it may be appropriate.

Thank you for joining the #ChechnyaProtest. Let’s make the world aware of what’s happening to gay men in #Chechnya. https://t.co/sOJvUBwTAm

The last few nights have seen protests in London at the Russian Embassy and around the country because of the 100 detainees. Norwich held its protest with around 50-60 attendees last night on the City Hall steps. The supporters were addressed by Norwich Pride’s Nick O’Brien, Labour MP Clive Lewis, Green’s Lesley Grahame, Katy Jon Went, Julie Bremner, Andy Futter, and Di Cunningham. (Gallery here)

We can keep the victims in the media eye, gain diplomatic and human rights traction by our voices, standing up for those who’ve lost their liberty because of their sexuality. This is poignant coming, as it does, on the 50th anniversary of the decriminalisation of homosexuality in the UK.

Sadly, over 70 nations worldwide still criminalise homosexuality and male on male sex which includes bisexuality, so let’s not forget that those imprisoned and beaten, even killed, may include gay and bi men, and trans – anyone who is an affront to the macho traditional image of Mother Russia and the two major religions in its regions, the Russian Orthodox Church and Islam.

Chechnya: Men detained for being perceived to be gay must be immediately released & their abuse/persecution ended https://t.co/DbbnIVQbSf

What is happening in Chechnya?

“stripped me naked. One filmed me on his telephone. Three of them beat me. They kicked me, broke my jaw. They said that this is a gay and that there shouldn’t be defects like this in Chechnya.”

Rounding up the “defects”, the “abnormal”, speaks of sexuality eugenics and group genocide.

These are not just rumours, the Guardian spoke to two victims who were “subjected to torture on a daily basis” and activists report this is happening in multiple towns across the region. Helplines have been set up to help LGBT people leave the country and journalists who have reported on it are also fearing for their lives after threats and considering that the rare independent voice of Novaya Gazeta has had several of its staff murdered.

We have no Gays!

Denial that is happening is part and parcel of how this kind of abuse works. Spokesman, Alvi Karimov, for Chechnya’s leader, Ramzan Kadyrov described the Novaya Gazeta report as “absolute lies and disinformation”, saying also that there were no gay people in Chechnya:

“You cannot detain and persecute people who simply do not exist in the republic. If there were such people in Chechnya, the law-enforcement organs wouldn’t need to have anything to do with them because their relatives would send them somewhere from which there is no returning.”

According to the Guardian, Chechen television is reporting that thousands gathered at Grozny’s central mosque to pass a resolution against the “lies and libel” in the Novaya Gazeta stories – “chiefly for suggesting there are gay men in Chechnya”!

“The centuries-old traditions of Chechen society, the dignity of Chechen men, and our faith have all been insulted, and we promise that those behind it will face reprisals, whoever they are and wherever they are.” – Chechen Resolution

This is similar to during the Sochi Winter Olympics, when “The mayor of Sochi, said there are no gay people in the city.”

Why ban what allegedly doesn’t exist?

Why forget and erase the history of your own great LGBT+ persons?

From Tchaikovsky and Mussorgsky, probably Stravinsky, the son of Rimsky Korsakov, Gogol, numerous artists, dancers like Nijinsky and Nureyev, to Ivan the Terrible with 7 straight marriages but a preference for cross-dressed men. Not to mention dozens of counts and princes of Russia’s past who were bisexual, open or closeted gay Russians.

Apart from religious condemnation of homosexuality in orthodox Christianity and Islam, I’ve encountered a secular Russian traditionalism that also condemns being LGBT on the basis that it destroys the family, the national image, and is just plain “abnormal”.

In June 2013, Russia brought in a law banning the “propaganda of homosexuality among minors”, not unlike the UK’s Section 28, but given the street-based homophobia much more dangerous. Section 28 of the 1988 Local Government Act stated that councils should not “intentionally promote homosexuality or publish material with the intention of promoting homosexuality”.

The law banning spreading “non-traditional” sexual propaganda to minors is so loosely worded that almost anything could be seen as illegal. Locals say they fear even holding hands or kissing in public for the risk of attracting a £100 fine or worse. Prides in Moscow (2006-2011) have been beset by homophobic violence and since 2012 banned for 100 years by Moscow courts.

Russia’s second-largest and hitherto most open city, St Petersburg, has seen a deterioration with city council members since 2012 pushing Putin to harder lines on LGBT freedoms. Marked homophobia and transphobia worsened in 2016 with LGBT persons and their supporters being hounded out of their jobs, attacked in the street, and denied civil freedoms.

Vladimir Putin, himself, has linked homosexuality to paedophilia and stated strongly that Russia needs to “cleanse” itself of gays if it wants to increase its birth rate.  The tagging of population growth on the end of that statement in no way minimises the echoes of a homosexual holocaust that was part of Hitler’s ‘Final Solution’ in “cleansing” 1930s Nazi Germany of Jews, homosexuals, the disabled, and non-conformists, alike. 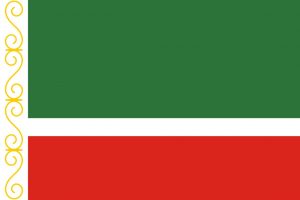 In 2011, the Chechen president, Ramzan Kadyrov, is quoted as saying:

“I have the right to criticise my wife. She doesn’t. With us [in Chechen society], a wife is a housewife. A woman should know her place. A woman should give her love to us [men]… She would be [man’s] property. And the man is the owner. Here, if a woman does not behave properly, her husband, father, and brother are responsible. According to our tradition, if a woman fools around, her family members kill her… That’s how it happens, a brother kills his sister or a husband kills his wife… As a president, I cannot allow for them to kill. So, let women not wear shorts…”

With these kinds of archaic gender stereotype attitudes is it any wonder that LGBT people are ostracised, given up, locked up, with little internal national complaint?

Freedom House included Chechnya in the “Worst of the Worst” list (2009) of most repressive societies in the world, together with Burma, North Korea, Tibet.

From the Russian Orthodox Church to Conservative Islam and extremist Islamism, religion, tradition and ideology are involved in the toxic intolerance of homosexuality in Russia and Chechnya.

We must support open-minded inclusive faith and practice, but not the closed-minded homophobia of secular and religious pronouncements and laws.

Keep Chechnya in the public eye, and don’t forget everywhere else we turn a blind eye to, like Saudi Arabia, Brunei, Uganda and the other 70+ nations that deny human rights to LGBTI people.