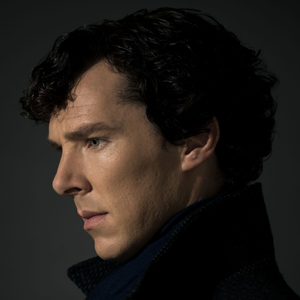 We can’t get enough of Benedict Cumberbatch and the BBC‘s ‪‎Sherlock, fortunately the Beeb have announced they are to return with filming of a 2015 Special beginning next January and then another 3 episode fourth season later in the year to hit our screens in 2016. The dripfeed of tantalising information began last Tuesday with a BBC One tweet: 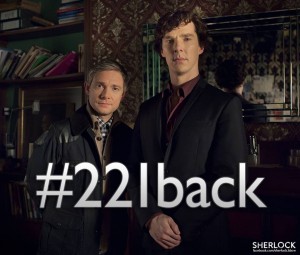 Of course the hashtags, #221back and #Sherlock, gave it away but talk about teasing foreplay and dangling this before us and yet making us wait over a year. It is because both the actors and writers are so good that they are in such demand elsewhere too. Cumberbatch on Star Trek, Martin Freeman on Fargo and both of them in The Hobbit. Then at precisely 2:21pm GMT, simultaneously in the UK and US, the BBC announced, and serially re-announced, the news formally, again via the trending ‪#‎221back‬ hashtag:

After the briefest of exiles, #Sherlock will return to face one of his biggest mysteries yet… #221back — BBC One (@BBCOne) July 2, 2014

…why is Moriarty’s face being broadcast on every television in the land? #Sherlock #221back pic.twitter.com/q39RHTrmB0 — BBC One (@BBCOne) July 2, 2014

We’re ready to unleash the most shocking and surprising series of #Sherlock yet. The only thing is to expect is the unexpected… #221back — BBC One (@BBCOne) July 2, 2014

The new series will be “deeper and darker” than before, and Moriarty could be back. Steven Moffat hinted that “the very next thing to happen to Sherlock and John, is the very last thing you’d expect.”

What has become a catchphrase of Sherlock, “the game is on”, is an update to “the game is afoot” which was originally uttered in just one Sherlock story, The adventure of the Abbey Grange:

“It was on a bitterly cold and frosty morning during the winter of ’97 that I was awakened by a tugging at my shoulder. It was Holmes. The candle in his hand shone upon his eager, stooping face and told me at a glance that something was amiss. ‘Come, Watson, come!’ he cried. ‘The game is afoot. Not a word! Into your clothes and come!’ Ten minutes later we were both in a cab and rattling through the silent streets on our way to Charing Cross Station.”

“The game is afoot” was not an original Conan Doyle inspiration but rather a phrase borrowed from that other English master craftsman, Shakespeare, some 300 years earlier. It first appears in a Shakespearian play, spoken by the Earl of Northumberland, in Henry IV, Part 1, Act 1, Scene 3:

“Before the game is afoot, thou still let’st slip.”

It also appears in the famous speech of King Henry beginning, “Once more unto the breach, dear friends…” and ending:

“I see you stand like greyhounds in the slips, Straining upon the start. The game’s afoot: Follow your spirit, and upon this charge Cry ‘God for Harry, England, and Saint George!'” (Henry V, Act 3, Scene 1)

So why the appeal of Sherlock with his narcissistic superior personality not to mention narcotic escapism on the side. Just why is Sherlock so addictive? Is it that we too are escapist fantasists wishing for an attachment with someone so detached, or do we want to be him, as intelligent and as apparently not needy? Although, it is clear from his weaknesses for drugs and Dr Watson, that he is, however idealised, still far from emotional self-sufficiency.

“My life is spent in one long effort to escape from the commonplaces of existence.” – Sherlock Holmes

It’s not as if Sherlock is great marrying material, given his views on the subject:

“Let’s talk about…murder. Did I say murder? I meant to say marriage. But, you know, they’re quite similar procedures when you think about it. The participants tend to know each other, it’s over when one of them’s dead. In fairness, murder is a lot quicker though.” – Sherlock, BBC

Sherlock himself was not one for emotional attachment, as the modern Sherlock says, “Sentiment is a chemical defect found in the losing side”, but his one weakness was for Irene Adler, whom Conan Doyle describes thus:

“To Sherlock Holmes she is always the woman. I have seldom heard him mention her under any other name. In his eyes she eclipses and predominates the whole of her sex. It was not that he felt any emotion akin to love for Irene Adler. All emotions, and that one particularly, were abhorrent to his cold, precise but admirably balanced mind. He was, I take it, the most perfect reasoning and observing machine that the world has seen…. And yet there was but one woman to him, and that woman was the late Irene Adler, of dubious and questionable memory.” – The Adventures of Sherlock Holmes

I’ve loved Sherlock ever since reading all 60 stories – published over a 40 year period, aged 15, and writing my English OA level special paper on him. I love his intelligence, but not his supposed rational avoidance of emotion for it is clear he loves Watson, not to mention the allusions to attraction and love for Irene Adler.

Whilst the US adaptation of the Sherlock brand, the TV series Elementary (Season 1 – 2012, 2 – 2013/14 and Season 3 announced), has been running nearly as long, it takes a different road. Sherlock, played by Jonny Lee Miller, gains the first female crime-busting sidekick with Lucy Liu as Dr Joan Watson – Sherlock’s sobriety companion, a form of addiction counsellor. Sherlock in this is more gritty, troubled, emotional – indeed more human, but no less intelligent despite essentially being in rehab.

It would be a massive SPOILER ALERT for watchers of the US series to reveal the clever twist in just who Moriarty may be. More details, if you already know, or don’t care, on the Wiki list of Moriarty portrayals.

Whilst Elementary is quite different, both play upon the original stories and cleverly leave us guessing as to how they will interweave Victorian plots and book references whilst remaining gripping narrative arcs with surprise twists. That said, Elementary drifts ever further from the originals and seems to exhibit little loyalty to the originals, not that Moffat and Gatiss are renowned for traditional faithfulness either, especially with the way they’ve reinvented Doctor Who – albeit, in my opinion successfully and brilliantly.

Although, contextually further away from the criminal detection, the American series House, again with a British actor playing the lead, transposes Holmes and to a lesser extent Watson, to a medical milieu. In many ways, it has been argued, the series is more faithful to the character of Holmes whilst straying almost completely from the plots. In this case it is Dr Gregory House, played by Hugh Laurie with his medical friend Dr James Wilson, same initials as Dr J Watson. They both live at 221B’s, House actually on Baker Street. Their first patient is named Rebecca Adler and later a reference is made to another patient, Irene Adler. 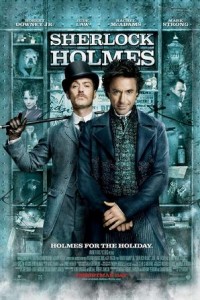 Sherlock Holmes has also been brought back to the big screen, so that we have three adaptations of him running simultaneously, along with the BBC version and US Elementary. In 2009, Guy Ritchie directed the first instalment of a British–American film series, produced by Joel Silver. It was more than sufficiently successful to  merit a sequel, Sherlock Holmes: A Game of Shadows, coming out for Christmas 2011.  A third film announced that year by Warner Bros is still, according to Jude Law in 2013, at scripting stage. Robert Downey Jr played a believably narcissistic Holmes to Law’s suave updated, rather than bumbling, Watson. Whilst the films were more action based than the originals, they have been updated for our times, just like the TV series, but with bigger budgets.

David Stratton, writing in The Australian, in a piece called “The Swinging Detective“ disliked the first film’s Indiana Jones-styled interpretation of the original stories concluding, “The makers of this film are mainly interested in action; that, they believe, is all that gets young audiences into cinemas today. They may be right, but they have ridden roughshod over one of literature’s greatest creations in the process.” The fact that there are literally dozens of versions, though, and that each may drive young readers back to the books, is surely a good thing. Just like stage plays and films of Shakespeare one can go for authenticity or adaptation, if not reinvention, it does not diminish the original, rather it shows how versatile and enduring the stories are.

Holmes is the most portrayed character in movies, of all time, with some 70+ actors playing him. Of all his portrayals, though, I’ve always loved the classic Basil Rathbone on TV and the sharper, perhaps less likeable, Jeremy Brett. Probably the worst, for me, at least, were Charlton Heston, Roy Hudd, Roger Moore and Edward Woodward – not that I didn’t like these actors in other roles, the latter in Callan, for instance.

On radio, a medium quite well suited to the stories, I loved Clive Merrison, the only actor to cover every story and thus the entire canon of Sherlock Holmes. Carleton Hobbs managed 56 of the stories in 80 radio productions. In the war years, Sir John Gielgud performed several radio versions.

The updated television versions make extensive use of visual demonstrations of Holmes’ thought processes, not to mention texting and phone technology, an advantage of television over radio, which lends itself to modernisation rather than authenticity. It may surprise you to know that John Cleese played Sherlock Holmes in a 1977 comedy spoof The Strange Case of the End of Civilization as We Know It. Other unlikely actors included Larry Hagman of Dallas fame playing him in another comedy drama made for television movie as a motorcycle cop who after an accident believed himself to be Sherlock Holmes. Peter Cook and Dudley Moore also paired up in a comic version.

It is to be hoped that modern reworkings of Sherlock Holmes in Sherlock, Elementary and the film franchise will create a new young audience for Conan Doyle’s character and send them back to books to marvel at Victorian penmanship.

Sherlock’s Facebook page has 3.7m likes and no doubt after 10 million Brits watched him rise from the dead, that figure will just rise and rise again.