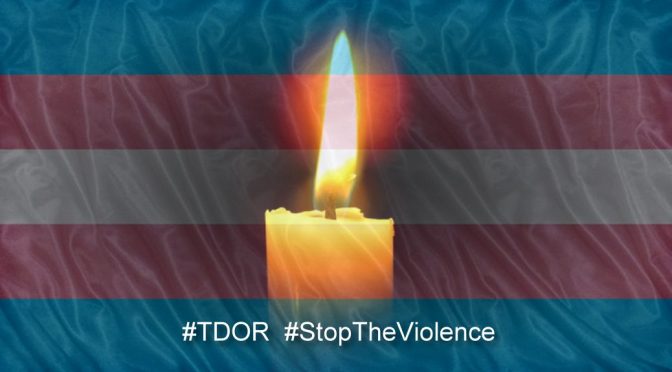 Every 27 hours a trans person is murdered, over 2,600 the last 10 years – that we know about. A number that is rising annually and particularly affects those in the Americas but also in nearly 70 other countries around the world.
Whilst nobody in the UK was knowingly killed this year, nonetheless, Ruth Hunt, CEO of Stonewall described Britain today as “at an absolute crisis point in how it treats trans people”, in no small part down to media attention.

Trans women of colour are the most likely to be killed of all transgender people. Instead of horrific headlines of transphobic killings it would be great to see more like this one, celebrating the political victory of poet, activist and social historian, Andrea Jenkin, winning a seat on Minneapolis City Council:

Jenkins is one of eight trans people elected to office in America this November. That is what we should be making the headlines for and not the violence.

But today, trans people are in the news for the shocking recurrence of their frequent murders. It seems recently, however, that they’ve been in the news every day. Frequently, there are 2-3 trans questioning or outright transphobic articles in The Times alone, not to mention other papers daily, and continuous TV and Radio programmes to boot.

Today, Ed Miliband “hit out at the inaccurate coverage in the press, accusing newspapers of propagating a “moral panic” similar to the anti-gay coverage seen in the 1980s.” – PodCast
Trans people’s lives are already under a microscope as part of their transition pathway, but to be so in the media spotlight too puts their private and social lives up for involuntary discussion and invasive dissection.
Lucy Meadows took her own life in 2013 in strong part due to “the toll the press was taking on her mental health”, says her former partner. “The media later claimed, [that] by putting out an “official” letter, the school [where she taught] had “officially” placed Lucy’s transition in the domain of public interest.”
A Day of Statistics, Sadness & Solidarity
Instead of the prurient public interest being in trans ‘sex changes’, former lives, and scaremongering fears of ‘sex pest perverts’, the media should be concerned about the levels of abuse, bullying, murder and suicide that so blight trans lives.
Last year, saw 295 trans and gender-diverse persons added to the list of those killed for being trans. This year that number is 325, up 10%. It went up 9% in 2015-2016 too. Improved news monitoring could account for it but hate and visibility are also on the rise.

In many countries, trans and gender non-conforming people live riskier lives, not by choice, but usually as a last resort due to the oppression, rejection and lack of rights within their cultures and societies. Many struggle to find work to survive, let alone to transition, and resort to sex work and/or flee their countries as migrants. Either or both of these paths putting them into the line of fire of greater exploitation and risk.
These numbers do not include suicides, the countless thousands who take their own lives – around 40% try, twice as many consider it. Sometimes it is the result of an attack:

These numbers are people. [Some of the names…]
These numbers are too many.
These numbers barely scratch the surface of the actual violence trans people experience, as much goes unrecorded, or cause/status unknown. Many countries don’t mention trans status in reports of violent death or in their internal statistics – particularly in anti-LGBT regimes and regions. Again, many may be killed in their acquired gender but the death not be because of it, of their pre-transition life simply not known about.
In addition to violent deaths, 1-in-2 trans people experience domestic abuse and/or sexual violence (DASV). Trans men and women alike often suffer in silence and fear that shelters and services won’t be there for them.
81% of trans people have suffered physical and/or verbal abuse.
Are they not women if people and society perceive them as such and treat them equally badly?
Yes, their social and biological experience when growing up is not that of natal women but many in medicine now recognise a biological rather than purely psychological basis for the origins of gender dysphoria.

How then can some in society – conservative religions, some feminists, right-wing journalists, think that being trans male or female is something that we can fight against?

The personal is political and it’s hard to avoid the political, for murder is as personal as it gets. The irony that this was a rallying cry of late 1960s/70s Second Wave Feminism and yet is also the lived and embodied risk of being trans is not lost on me. Women regularly experience sexism and discrimination because of their sex. Black women even more so, adding racism to the crimes against their person.
The majority of feminists recognise the intersections between sex, sexuality and colour, not to mention class. Again, most modern and particularly young student feminists recognise the further intersection with gender identity. A few do not, and instead regard trans women as a threat to gendered spaces and trans men as traitors erasing butch lesbianism.
The conflation of sex with gender and/or sexuality is an issue needing better education to better understand people’s authentic ‘born this way’ identities.
Don’t scapegoat us as perverts and rapists. Don’t harm us and kill us. Instead, be allies, support us to be ourselves, and let’s bring these murder, abuse, and suicide rates down next year!

[*I denounce all #punchaFemiNazi, #punchaTERF, #punchaTranny memes and tweets, because no form of violence, real or humorous should be being encouraged.]

TDOR remembrance meetups were held around the UK including London, Liverpool, Brighton, and Norwich, as well as around the world including Paris and New York and dozens of other locations.

Norwich, my adopted home city held two TDOR events, one at the UEA attended by over 80 people (Concrete Online report), and another outside the Forum, with 40-50 people including the Lord Mayor and representatives of the CofE clergy. Speakers included me (Katy Jon Went) using the text above, Evie Thomas of UEA, and poetry read by Sarah Corke and Poppy Rose.

I was most impressed by the number of allies that attended, showing that society and Norwich in particularly is openminded and accepting in the main, and supports the rights, lives and wellbeing of trans and gender non-conforming people, despite media articles to the contrary.