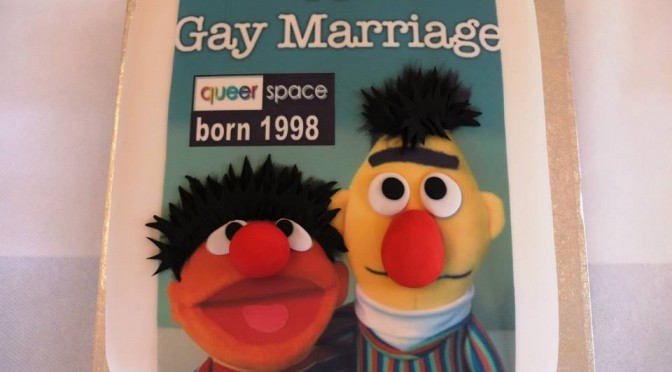 Marriage in Northern Ireland is still “defined as being a union between one man and one woman” says NI Christian bakery company that refused to bake a “gay” Bert and Ernie queer cake and is taking “a stand” according to a trending BBC story.

[UPDATE: Bakery loses appeal against conviction for discrimination based upon the grounds of sexuality]

It seems that the cake request came from a volunteer LGBT activist from Belfast’s QueerSpace, as the cake design was to include their logo. QueerSpace is a “volunteer-led collective which has been serving the LGBT community of Belfast and Northern Ireland since 1998. It does this by raising LGBT visibility, supporting LGBT community activities and facilitating communication.” 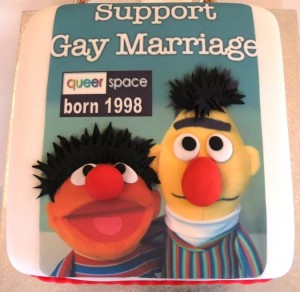 The cake was designed for their event to promote the International Day Against Homophobia as can be seen in the alternatively sourced cake that features prominently in several Facebook photos.

The International Day Against Homophobia is celebrated each year on 17 May to combat homophobia and transphobia.

Described by Channel 4 News as “Sesame Street’s most sexually ambiguous couple”, Bert and Ernie have long been considered possibly, if not probably, gay.

The official Sesame Workshop position is that they are just “good friends”. In a 1993 statement they issued, it said:

“Bert and Ernie, who’ve been on Sesame Street for 25 years, do not portray a gay couple, and there are no plans for them to do so in the future. They are puppets, not humans.”

CEO Gary Knell in Sesame Street: A Celebration – 40 Years of Life on the Street, was a little more vague, hinting at sexual ambiguity as well as their sexual inability: 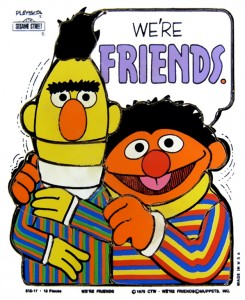 In a 2011 statement it was reiterated that they “do not have a sexual orientation”.

This didn’t stop some Christians complaining that they represented a gay couple. Reverend Joseph Chambers on his radio show, in 1994, said:

“Bert and Ernie are two grown men sharing a house and a bedroom. They share clothes, eat and cook together and have blatantly effeminate characteristics. In one show Bert teaches Ernie how to sew. In another they tend plants together. If this isn’t meant to represent a homosexual union, I can’t imagine what it’s supposed to represent.”

Eric Jacobson, in a 2011 interview for Vanity Fair, said that Bert and Ernie were more “The Odd Couple” than a gay couple, if anything they emulated the close friendship of Jim Henson and Frank Oz.

All these assertions and denials, it makes one wonder, because we all know what hides behind denial, lol! 😉

Ashers Baking Company and its Christian founders and directors have taken their stand based upon their religious beliefs against a customer’s request to bake a pro-equal marriage cake. Whether the gay rights activist’s order was a test and if the bakery’s Christian views were well known beforehand is not clear. What is clear, is the law. Refusal of goods or services based upon someone’s actual or perceived sexuality is an offence. The Equality Commission wrote to the bakery saying that they had discriminated against the customer on the grounds of his sexual orientation and that they had seven days to recompense and “remedy [their] illegal discrimination” or end up in court.

According to a YouTube statement the company was named after Asher, one of the twelve tribes of Israel, recorded as having “gifted bakers” in it. It runs itself on what it perceives to be Biblical guidelines, not opening on Sundays either.

General Manager, Daniel McArthur, said of the customer order that:

“The directors and myself looked at it and considered it and thought that this order was at odds with our beliefs. It certainly was at odds with what the Bible teaches, and on the following Monday we rang the customer to let him know that we couldn’t take his order.”

It was not the first time the bakery had declined orders, McArthur, said they had also refused to bake cakes containing “pornographic images and offensive vile language”. They made no direct link between gay marriage and pornography but by offering up no other examples their statement makes a less than subtle and unfortunate, if not downright offensive, connection between the morality of pornography and homosexuality to some Christians.

Rev Andy Marshall, a Church of England priest, has written a fabulous piece pointing out Ashers’ biblical failings according to Leviticus and the New Testament. I mean what is a non-bearded man doing selling pork sausage rolls and then condemning dubious Levitical laws allegedly condemning homosexuality? Not to mention not representing the love and acceptance that Jesus showed towards ‘outsiders’, the oppressed and minorities. I can imagine Jesus being more likely to storm angrily into the bakery and upset their dough wielding a “whip of cords“.

Whilst Northern Ireland is the only part of the UK not to have passed a same-sex marriage law, this particular incident depends entirely on existing legislation prohibiting discrimination on the grounds of sexual orientation.

The Equality Commission for Northern Ireland has responsibility for enacting and enforcing the Employment Equality (Sexual Orientation) Regulations (NI) 2003 and the Equality Act (Sexual Orientation) Regulations (NI) 2006 acts. It is the latter regulations , which came into force in 2007, which make it unlawful to discriminate on the grounds of sexual orientation in the provision of, among other things, “goods, facilities or services”.

Whilst some religious organisations in Northern Ireland are exempt from the regulations, a bakery is a business, Christian-run or not, and as such must comply.

A Defence of Religions and Political Freedoms?

The Christian Institute, which is mounting their defence, disagrees and their director, Colin Hart said:

“All the McArthurs want is to run their bakery according to their Christian beliefs. There won’t be many situations where they need to turn down an order but this is obviously one of them. No one should be forced to use their creative skills to promote a cause which goes against their consciences.”

In an interview with the Daily Telegraph the initial story of which made front page news, Hart described this in apocalyptic terms:

“[It’s] a sign of things to come exactly as we predicted…. Now this nonsense, more usually associated with the public sector, is being applied to the private sector … This means millions of ordinary people who do not agree with gay marriage, face intimidation and the real threat of legal action from the forces of political correctness if they, out of conscience, decline to provide good or services to campaign groups they do not agree with or support. It establishes a dangerous precedent about the power of the state over an individual, or business to force them to go against their deeply held beliefs.”

Their defence will be based upon arguing that an equal marriage cake is a political campaign and that it is not discrimination to refuse to endorse a political position.

The issue has now made it to the UK Parliament with Prime Minister’s Question time (PMQs) raising the issue and David Cameron, knowing little about it, being challenged to defend religious freedom.

The case has some similarity with the recent SCOTUS (US Supreme Court) judgement on Burwell v Hobby Lobby in which despite a federal mandate to provide employee health coverage, Hobby Lobby’s owners, David and Barbara Green, refused to comply as they felt that 4 out of 20 of the health insurance registered contraceptive drugs were morning-after and week-after life terminating abortion pills, based upon their view of life beginning at conception. SCOTUS upheld their refusal by 5-4 and ruled in their favour with “important implications for over 50 pending lawsuits brought by non-profit religious organizations … also challenging the mandate”.