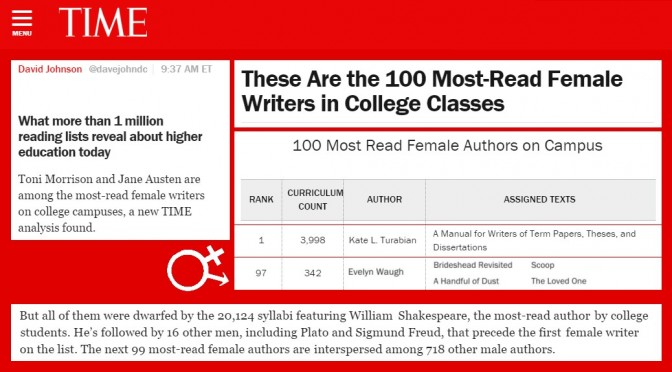 Today Time reported on the top 100 most-read female writers on college syllabi drawn from the Open Syllabus Project‘s collection of over 1.1 million course syllabi referencing 933,635 texts. Unfortunately, Time fell foul of a schoolboy error, thinking that the creator of Brideshead Revisited, Evelyn Waugh, was a woman. Akin to thinking George Eliot was a man, she was in fact one Mary Ann Evans. Whilst they soon changed it to another undoubtedly female author they could not stop the error-spotting pedants’ scoop circulating on social media.

Historically, over the last 15 years, some 20,214 syllabi have featured William Shakespeare. Plato, Marx and Freud, and 13 other male writers precede the first female author on the list: A Manual for Writers of Term Papers, Theses, and Dissertations by Kate L. Turabian. The current course texts list includes at #5 Mary Shelley’s Frankenstein ahead of Aristotle’s Ethics, and Turabian’s work at #13.

So, not a female writer then! But also, not an uncommon mistake as Waugh himself pointed out:

“I was christened Arthur Evelyn St John: the first name after my father, the second from a whim of my mother’s. I have never liked the name. In America it is used only of girls and from time to time even in England it has caused confusion as to my sex.” – Evelyn Waugh, A Little Learning: The First Volume of an Autobiography

Following TIME magazine‘s gendered mistake, the Independent in its ante-penultimate weekend issue seem to have made the same error:

“When Evelyn Waugh was listed recently among Time magazine’s top 100 female writers, it made me wonder how Evelyn’s books would be reviewed and marketed if she had written them now. In 1928, Decline and Fall was lauded as a viciously funny social satire; but would the same novel by Mrs Waugh be read as semi-autobiographical flimflam about a wedding? A Handful of Dust: a condemnation of the futility of humanist philosophy, or a thinly disguised roman à clef? Vile Bodies was a dark view of a decadent, doomed generation, but today’s Evelyn would have had her novel forced into pink covers, renamed Pretty Young Things and marketed as a romcom.”

Waugh, not a fan of punctuality, considered it a virtue only for the bored – much like Marilyn Monroe. Perhaps he had a similar attitude to accuracy! Certainly, he thought gendered division by sex “absurd”:

“Instead of this absurd division into sexes they ought to class people as static and dynamic.” – Evelyn Waugh

In 1927 Waugh got engaged to one Evelyn Gardner, yes another Evelyn, and they were affectionately known as He-Evelyn and She-Evelyn, though the marriage only lasted a year owing to She-Evelyn’s unfaithfulness with a mutual friend rather more simply named John. During the decline and fall of their marriage, Waugh’s first book and social satire, Decline and Fall, became successful. The first edition bore a note from the author:

“Please bear in mind throughout that IT IS MEANT TO BE FUNNY.”

One imagines that is probably how he would see his name being on an all-female writers list!

The actual first woman to write a book in the English language, Revelations of Divine Love (1395), was an anchoress attached to the Church of St Julian in Norwich. She is even named ‘Julian’ from the church cell she occupied as her actual name is not known.

The use of a cross-gender pen name has been around for centuries, in the main for female authors trying to get published or taken seriously in the predominantly male domain of publishing.

Whilst Mary Wollstonecraft Shelley wrote as female, Mary Ann Evans chose to use the nom de plume of George Eliot to avoid Victorian romantic stereotyping of her writing. Instead, she wrote seven serious and substantial novels including Adam Bede (1859), The Mill on the Floss (1860), Silas Marner (1861), Middlemarch (1871–72), and Daniel Deronda (1876). Middlemarch is currently #331 on the list of over 900,000 texts. 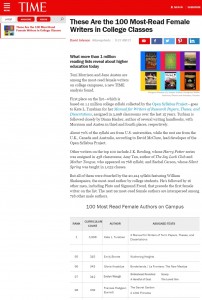 Another female author said that “My name is not Marie-Aurore de Saxe, Marquise of Dudevant, as several of my biographers have asserted, but Amantine-Lucile-Aurore Dupin”, in fact, nineteenth century French novelist Aurore wrote under the more familiar name George Sand. Apart from novels and a memoir of an affair with Chopin, Sand wrote works of literary criticism, socialist political and feminist activism. At the outset of the 1848 French Revolution she founded a workers’ co-operative newspaper. The Russian novelist Ivan Turgenev said of her:

“What a brave man she was, and what a good woman.”

She even began wearing male attire in public, claiming it was more practical and hardwearing. It also gave her access to places more typically dressed French noble women might have been barred from. It didn’t stop the criticism of her smoking in public, then frowned upon for women. Her most well known and most-translated work La Mare Au Diable (1846) “The Devil’s Pool” appears at #24,956 on the Open Syllabus list and has even been reinterpreted as a contrasexual queer novel once the author’s female gender is acknowledged.

Isak Dinesen or indeed Pierre Andrézel were in fact the Danish female author Karen Dinesen who became Baroness Karen von Blixen-Finecke. She is best known for two literary works that became films, Out of Africa (1937) #6,151 and Babette’s Feast (1958).

Harper Lee the Pulitzer Prize-winning author of To Kill a Mockingbird (1960) #255, who died last week, was born Nelle (Ellen spelled backwards, her grandmother’s name) but wrote under the gender ambiguous name Harper. Harper as a forename is derived from the Middle English surname for a harpist, and is most commonly a boy’s name but does feature in girl’s names lists, even as high as #89 in the UK (2014).

The Harry Potter novels author, Joanne Rowling, has written as JK and as Robert Galbraith. It was her publishers who asked that she use use initials to aid appeal to the male young adult market. Her highest novel, Harry Potter and the Prisoner of Azkaban, is ranked #4,599 by the Open Syllabus Explorer.

The eighteenth century American Founding Father Benjamin Franklin penned works under pseudonyms. He chose Richard Saunders but also Alice Addertongue, Polly Baker, Martha Careful, and Caelia Shortface. The 1747 Speech of Polly Baker by Franklin was an early woman’s rights protest against the way women were hounded and charged for having illegitimate children not the fathers. 250 years later societies are still trying to solve that injustice.

It is a common writing exercise and literary device to change the gendered Point of View (POV) of an author and have them write from the viewpoint of a main protagonist who is of a gender different to that of the author. A variation on this is what Twilight author Stephanie Meyer intends to do with the release of her gender-switched tenth anniversary rewrite of the novel. Life and Death: Twilight Reimagined features a male human Beau and female vampire Edythe, transposing the original roles, allegedly to prove the original intended no patronising damsel in distress stereotype.

It’s been sadly proven that job applications, manuscript submissions are affected by gender bias. It is a very interesting psycho-social experiment to degender authorship and identity, to third-person neutral gender reference work colleagues by their job proficiency and not by their sex. Perhaps all authors should use initials? I often use just KJ so as not reveal my gender or even transgender by my fully spelled out name, Katy Jon.