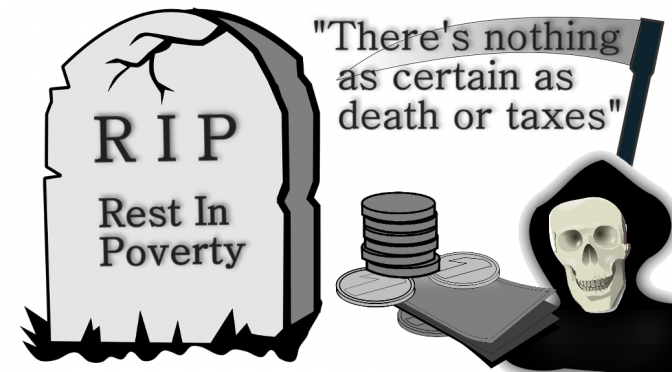 It seems everything is taxed these days, from bedrooms to tampons,  oversized coffins and even death itself. Death and taxes, not the punk song by Kid Dynamite, nor the debut 1941 novel by accountant David Dodge about a tax expert and reluctant detective James ‘Whit’ Whitney, but those certainties first twinned by Christopher Bullock in his 1716 Cobbler of Preston, and no, it was not Mark Twain, either:

“’Tis impossible to be sure of anything but death and taxes!”

In 1724’s Dancing Devils Edward Ward wrote of their certainty:

“Death and Taxes, they are certain.”

That devilish certainty was repeated by Daniel Defoe in his 1726 Political History of the Devil:

“Things as certain as Death and Taxes, can be more firmly believ’d.”

More familiar, perhaps is the reference by Benjamin Franklin in a letter to Jean-Baptiste Leroy, in the year of the French Revolution, 1789.

“Our new Constitution is now established, and has an appearance that promises permanency; but in this world nothing can be said to be certain, except death and taxes.”

Margaret Mitchell added a third inconvenience in her 1936 book Gone With the Wind:

“Death, taxes and childbirth! There’s never any convenient time for any of them.”

Will Rogers quipped that:

“The only difference between death and taxes is that death doesn’t get worse every time Congress meets.”

Of the two certainties in life, death and taxes, there are as many curious taxes as causes of death, indeed some of the former may be brought about by the latter. Government austerity cuts, a kind of reverse taxation but cutting benefits, can lead to deaths too – suicides, illness, and accidental – as one listener to BBC Radio 4 pointed out this week, having a DWP fitness for work interview pass you as fit when you suffer from blackouts and then you get a job as a driver and plough down innocent pedestrians in a dustbin lorry, for example.
More taxes: Window Tax | Brick Tax | Hat Tax | Hearth Tax | Wallpaper Tax | Soap Tax | Beard Tax | Tampon Tax | Royalist Tax | Poll Tax | Council Tax | Bedroom Tax | Inheritance Tax | Tax Avoidance

My favourite misguided tax is still the window tax, not the Windows tax – the cost of bundling Microsoft Windows with all new PCs. The 1696 tax is still much in evidence today by bricked up 17th-18th century building windows. Allegedly it is the origin of the term “daylight robbery”, and only repealed in 1851 after complaints that it was a “tax on health”, and a “tax on light and air”. Just like income tax there was a tax-free allowance of 6-8 windows. The origins of the first council tax, in fact, with property bands based upon the number of windows – so people cheated and bricked up their windows – when they could afford the bricks.

Thank god, not on Lego, but on bricks and taxed at manufacturing source on the builders during the revenue-raising needs of the Napoleonic and American Wars and after up until 1850. It was charged per brick so canny builders increased the size of them until the government of the day capped the maximum size of a brick by law. Clever tax avoidance is not a modern phenomena restricted to Amazon, Apple, Ebay, Google, Starbucks, Vodafone etc.

Another means of funding wars was the hat tax, which was essentially on the wealthy. Nonetheless milliners found ways round it, reclassifying their headgear leading to a legal definition of a hat in 1804, or faking the tax labels at great risk as hat tax avoidance could merit the death penalty – something to reconsider for Apple and Amazon?

The late 17th century hearth and stove tax on heating and fireplaces served to take from the necessities of life to provide for the luxuries of life of King Charles II.

Introduced under Queen Anne in 1712 but ran for 124 years on preprinted and painted wallpaper at least. This led to artistic ingenuity and spontaneous on-site stenciling on plain papers by creative builders and decorators.

The “mischievous and vexatious” soap tax raised as much as alcohol duty does today. It ran for 142 years until its repeal in 1853. It was levied upon the weight of soap not its quality or value and thus disproportionately affected the poor and prejudiced their cleanliness and overall health. It became a slave trade issue under William Gladstone who abolished it in favour of a less distorted market in African palm oil products.

“AMONGST our numerous taxes, this is one of the worst. It is levied on an article essential both to cleanliness and health; it is very unequal; for whilst the duty adds two thirds to the price of the coarse soap which the poor man uses, it becomes trivial when levied on the refined and scented soaps of the rich. It combines in itself, and that to a considerable extent, two of the most objectionable elements in taxation: duties are laid upon all the raw materials of its manufacture, and then a heavy duty, both mischievous and vexatious, is levied upon the manufactured commodity, the effect of the regulations under which it is collected being to encourage smuggling, and to shut out all improvement in the legitimate trade.” – The Spectator, 27 April 1833

A tax on beards – a surefire way to raise money today out of coiffured lumbersexuals – was apparently a myth. Razors and shaving items are, however, taxed at 20% which is actually a tax on non-beards!

Yes, unlike beards but not shaving, they are taxed – albeit at a reduced rate of 5% rather than the 20% VAT on other allegedly non-medically necessary health and sanitary care products. That they should be taxed at all is a scandal, but it is a false argument to compare them to men’s sanitary products, despite shaving being a choice and bleeding, not one, since men’s grooming products are mostly charged at 20%.

A tax on the monarchy sounds like a great idea. Oliver Cromwell taxed the Royalist monarchists in 1655-56. Perhaps one that could be brought back?

Variations on this have been around since time immemorial. Censuses make it possible. The Peasants’ Revolt of 1381 opposed it as did the people’s revolt of 1990, i.e., the UK ‘Poll Tax’ riots under Margaret Thatcher. After the Black Death took out half the population there was a shortage of supply and increased opportunities for the surviving working population. This led to socio-economic upward mobility and a power shift towards labourers, something the property classes did not like. War with France needed finance and so repeated taxes on every adult were applied and raised. The second poll tax was actually quite fair based upon seven different English classes, and taxing the wealthiest upper classes the most. It was broadly evaded and avoided though and raised little, prompting a third flat rate tax on everyone, which was the one that caused the lower classes to rebel.

Coming in as allegedly more progressive than the infamous headcount Poll Tax or Community Charge, the Council Tax is often raised for reform as the values of houses and banding have changed so radically since its inception and a review is well overdue. Adding additional higher bands would be an excellent tax on property, but it is the people with property that make the decisions and they are reticent.

Or “Spare Room Subsidy” as politicians on one side of the House tried to label it, but like the Poll Tax, the colloquial name stuck. It is a reduction in benefit, another tax by stealth, on housing benefit for having an alleged excess of bedrooms – leading to attempts to redefine the smallest room as a box room and uninhabitable. Of course private tenants, were already receiving reduced benefits for living alone as brought in under Labour. Council social housing tenants were not affected until the Conservatives applied similar but not identical rules to them. it cruelly and disproportionately affected the disabled and their carers, the elderly keeping a spare room for family, and families with those in the forces rendered unable to maintain a room at home for them.

This is at one at the same time the fairest and unfairest tax. It is a kind of tax on death itself, a double taxation on property acquired through previously taxed income and expenditure, since there is also a Stamp Duty Tax on property purchase. Whilst it is blatantly an unethical double taxation, it is obviously affordable, though the rich circumvent it and the asset rich, cash poor are most affected by being unable to pass on a family home without selling up.

The more you have, the easier it is to avoid responsibility and requirement. The irony of public ownership is the duty to shareholders to maximise profit and minimise tax on commercial enterprises. Artfully called tax avoidance or reduction, or even tax flight, only tax evasion is technically illegal. The rest, many regard as unethical. As Plato said, that avoidance is unjust.

“When there is an income tax, the just man will pay more and the unjust less on the same amount of income.”

Those that can afford to pay more should in a communitarian society. We can’t wait for belated billionaire philanthropy, however amazing giving away 50-99% of your wealth sounds. Taxes should cut in before anyone amasses a billion!

Taxes, an evil force for good?

Taxes are necessary evils, originally bought in to finance wars rather than the welfare state. Tax collectors and money lenders are oft caricatured as evil themselves. In some countries, Hijra trans people are employed to shame and embarrass people into paying their taxes.

A number of Middle Eastern countries have just bought in taxes for the first time with the price of oil at a recent low meaning that they cannot live off their natural assets.

Competing economists and politicians have argued for a low flat rate tax that is paid by all and encourages compliance and simplicity versus complex and graduated taxes on income and wealth which are often avoided. From Churchill to Thatcher many have argued that lower taxes encourage prosperity and allegedly raise more revenues.

“It is a paradoxical truth that tax rates are too high today and tax revenues are too low, and the soundest way to raise the revenues in the long run is to cut the tax rates.” – John F. Kennedy

“For a nation to try to tax itself into prosperity is like a man standing in a bucket and trying to lift himself up by the handle.” – Winston Churchill

The UK tax handbook runs to thousands of pages, wouldn’t a simple flat tax be better? Even if it were true, it would raise prosperity for all, in an uneven, unfair way.

Taxes on consumption of alcohol and tobacco, fuel and certain foods, are the easiest to administer but fall heaviest on the poor.

No tax seems fair and more of us want to live off-grid, bringing back barter and local exchanged trading schemes as alternates to taxable currency, income and purchases, until, that is, we use a road, call the police, or need the NHS and wonder how we pay for it? The better the life we want, the more we will need taxes to pay for it, and the less we can rely on diminishing natural resources to prop up the state. Taxes are about responsibility and being wealthy enough to be income taxed at least means being better off than those that live below the minimum income tax bracket. I’d love to be rich enough to have to pay a 40-50% tax on higher income levels!